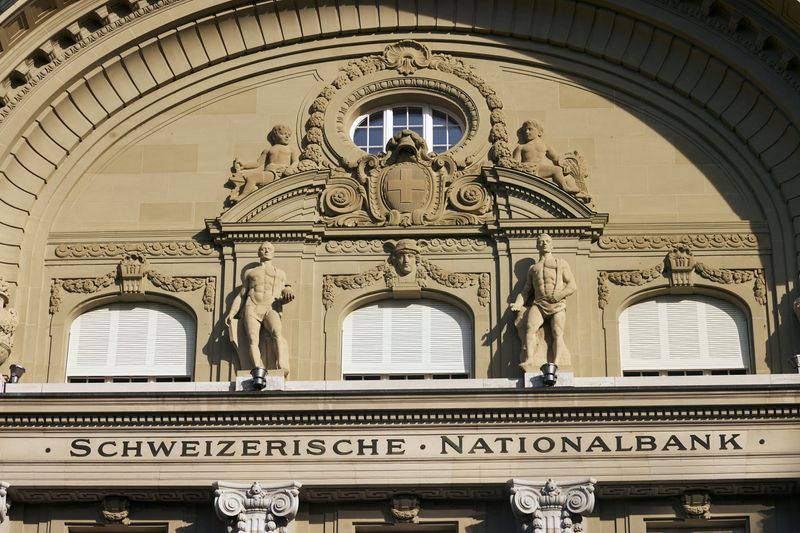 ORLANDO, Fla. (Reuters) – If estimates that world markets face a record $4 trillion liquidity drain over the next 18 months are even close to accurate, hold on to your hats.

That’s how much analysts at Morgan Stanley (NYSE:) reckon G4 central banks – the U.S. Federal Reserve, European Central Bank, Bank of Japan and Bank of England – will shrink their balance sheets by, via quantitative tightening (QT), by the end of next year.

The estimate does not include the Swiss National Bank (SNB), one of the world’s biggest liquidity providers of the last decade.

Perhaps even more significant than the SNB’s 50 basis point interest rate increase last week was its admission that the franc is reasonably valued, suggesting that currency market intervention of recent years has ended.

If this is the case, the SNB’s role as a marginal but steady buyer of U.S. and euro zone bonds, and mega-cap Wall Street stocks, may be over.

The SNB’s balance sheet stands at around $1 trillion, up from around $200 billion in 2010. That’s an average of around $70 billion injected annually into world markets that could now disappear.

This is a strong signal that even the world’s most dovish central banks are changing tack. While we’re not there yet, an even bigger shock would be the Bank of Japan (BOJ) calling a day on its ‘yield curve control’ policy of buying unlimited government bonds to cap the 10-year yield at 0.25%.

In some ways, Morgan Stanley’s $4 trillion liquidity drain estimate is even more remarkable in that it predicts the BOJ’s contribution will essentially be zero.

“The SNB and BOJ have contributed a very significant liquidity injection over the years that has led to large inflows into asset markets. If it were to stop, for whatever reason, that would be very dramatic,” said Jens Nordvig, founder and CEO of Exante Data.

The BOJ has employed zero interest rate policy (ZIRP) and quantitative easing (QE) for years, and the country’s large, accumulated current account surpluses have been plowed back into higher-yielding assets abroad.

Japan has long been the world’s largest creditor nation and its net stock of foreign assets, accumulated over the last few decades, especially, hit a record $3.24 trillion last year.

The SNB, meanwhile, has gone one better on rates and pushed them below zero – ‘NIRP’, or negative interest rate policy – and has pumped hundreds of billions of dollars of cash accrued in sustained currency market intervention across swathes of the world’s major bond and equity markets.

Unique among major central banks, the SNB is a publicly-traded company, and also a huge investor in overseas stock markets. A quarter of its balance sheet is in foreign stocks, – a record share – much of it on Wall Street in multi-billion dollar stakes in companies like Apple (NASDAQ:) , Microsoft (NASDAQ:) and Amazon (NASDAQ:).

Some of the world’s major stocks and bond markets are having one of their worst first-half-of-the-year performances since the Great Depression, as the Fed has raised rates, signaled more to come and just started reducing its balance sheet via QT.

As the following chart from Exante Data shows, the total amount of bank reserves created by the BOJ and SNB to purchase financial assets towers over all others, as a share of GDP. The BOJ’s bank reserves amount to 104% of GDP, and the SNB’s 88%.

The SNB’s hawkish pivot will ultimately halt the build up of ‘sight deposits’ via franc-weakening currency intervention, and the Nasdaq’s 30% slump this year could dampen its appetite for adding to its $177 billion equity portfolio.

As far as Japan goes, investors’ purchases of foreign stocks and bonds since ‘Abenomics’ was launched in 2013 have totaled around $15-$20 billion a month on a 12-month moving average basis, peaking in 2016.

But the yen has just hit a 24-year low against the dollar around 136 yen, and by some measures is the weakest in 50 years on a real effective exchange rate measure. If inflation pressures in Japan finally become embedded, the impact of a potential BOJ pivot would be huge.

“At some point, they are going to have to exit, and when they do it is going to be like one of these days that people remember in their careers, like Brexit, or for the older bears out there, Plaza,” said Marc Chandler, managing director at Bannockburn Global Forex, referring to Britain’s departure from the European Union in 2016 and the G5 coordinated effort to weaken the dollar in 1985.

– Nowhere to run, nowhere to hide as ‘stagflation’ bites (June 13)