Recovers Part of its Losses


We expect the stock’s decline to return during its upcoming trading.

The Dow Jones Industrial Average rose during its recent trading at the intraday levels, to achieve gains in its last sessions, by 2.15%, to gain about 641.47 points. It settled at the end of trading at the level of 30,530.26, after declining in Friday’s trading by -0.13%.

US stocks bounced back from last week’s selling, with government bond yields rising as risk-off sentiment subsided on Tuesday, with all sectors posting gains led by energy, consumer appreciation and consumer goods.

In other economic news, the pace of US existing home sales fell 3.4% to 5.41 million at a seasonally adjusted annual rate in May, data from the National Association of Realtors showed on Tuesday. The expected drop was 5.4 million in a Bloomberg poll. After four consecutive declines, sales were the lowest since June 2020 and were down 8.6% from the previous year.

Technically, the index is trying to compensate for part of what it incurred from previous losses. At the same time it is trying to drain some of its clear oversold by the relative strength indicators, especially with the emergence of a positive crossover in them. All of this comes in light of the control of the short-term bearish corrective trend along a slope line, as it is shown in the attached chart for a period of time (daily). This is with the continuation of the negative pressure of its trading below the simple moving average for the previous 50 days.

Therefore, we expect the stock’s decline to return during its upcoming trading, especially throughout its stability below the resistance level 31,000, to target the support level 28,658. 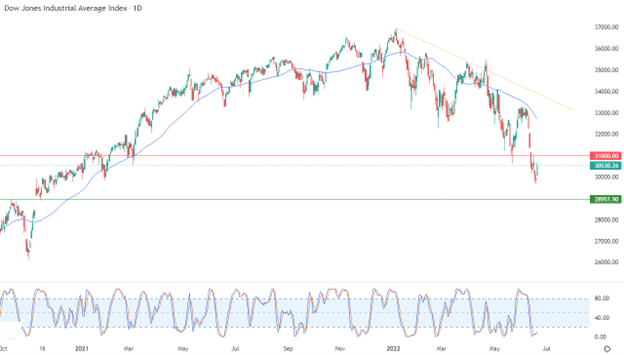 Gold Price Forecast: XAUUSD to avoid a dip below $1,800 – Commerzbank