The difference between success and failure in Forex / CFD trading is very likely to depend mostly upon which assets you choose to trade each week and in which direction, and not on the exact methods you might use to determine trade entries and exits.

So, when starting the week, it is a good idea to look at the big picture of what is developing in the market as a whole, and how such developments and affected by macro fundamentals, technical factors, and market sentiment. Read on to get my weekly analysis below.

There are still a few strong trends in the markets, and following them can help put the odds in your favor.

I wrote in my previous piece last week that the best trades for the week were likely to be:

The news remains dominated by the Russian invasion of Ukraine, which is well into its third month, but seems to have become stalemated by an effective, NATO-armed Ukrainian defense, funded by the US alone with more than $40 billion to date. Russian forces have withdrawn from the northern part of the company, switching focus to an offensive aimed at fully capturing the eastern and southern coastal regions of Ukraine. The war initially caused quite strong movements in some markets, especially in certain agricultural commodities such as Wheat and Corn, but now seems to be having little effect beyond weighing on global stock markets and keeping the price of Wheat relatively high. Of course, there are other fundamental factors weighing on stock markets, such as the specter of stagflation, and rising interest rates.

There is a risk-off sentiment gripping markets, but it is expressed mostly in falling stock markets and bearish action in cryptocurrencies, with the market currently treating these as the major “risk” assets. This is being driven by several fundamental and sentimental factors:

Stock markets are generally weak, but it should be noted that the S&P 500 Index was bought quickly the two times it fell close to or below its 20% decline level at 3,856. This suggests long-term buyers are stepping in at this technical bear market area. Buying the dips in the US stock market has been a great strategy in recent years, but there is certainly a strong downwards trend in US stocks which is supported by fundamental factors and monetary policy.

Cryptocurrencies continue to look very weak, but it is notable that Bitcoin buyers are stepping in when Bitcoin threatens to break down below $28,607. It should be said the price action is weak, and there remains a serious and immediate danger of strong falls in major cryptocurrencies. Short trades in cryptocurrencies will continue to attract speculators in this environment, while margin calls will force retail liquidations.

The Forex market is dominated by a sell-off in the US Dollar which does not quite fit into the risk-on / risk-off paradigm. Although the safe-haven Japanese Yen made a gain against the greenback last week, so did almost every other currency. The main factor driving the Forex market now is US Dollar weakness.

There is increasing hope that the coronavirus pandemic may be almost over, although rates of coronavirus infection globally rose last week for the first time in nine weeks. The only significant growths in new confirmed coronavirus cases overall right now are happening in Australia, Chile, the USA, Panama, Portugal, Trinidad, and Taiwan.

The coming week in the markets is likely to be equally or more volatile than last week. There are a few releases of high importance scheduled. They are, in order of likely importance:

The weekly price chart below shows the U.S. Dollar Index fell last week, against the long-term bullish trend, printing a bearish engulfing bar that closed not far from the bottom of its range. This reversal is not very notable technically, apart from its location in the chart confluent with a long-term high, with reinforced the bearish case. In another sense it is very notable, as the Dollar had risen for the last eight consecutive weeks. This downwards move does not come as a complete surprise, as it had been clear that the pace of bullish momentum was declining.

Another notable feature in the Forex market this week was the selloff in the greenback against all other currencies, showing the market is currently being driven by US Dollar weakness.

Despite the long-term bullish trend, it will probably be a mistake to expect a rising Dollar over this coming week. 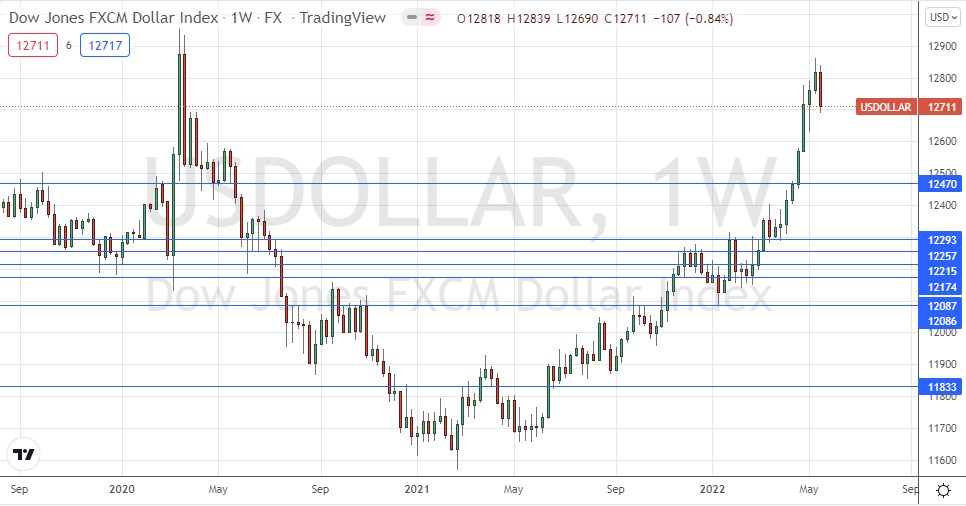 The world’s most important stock market index, the S&P 500 Index, fell again last week for the seventh consecutive week, and finally reached a 20% drop from its all-time high, signaling a formal bear market in this Index by any measure. There is a long-term bearish trend, which is showing quite healthy momentum. Last week’s closing price was the lowest in more than 14 months.

These are bearish signs and there are good reasons to be shorting major stock market indices now, especially this which is the biggest Index in…

Forex Today: A quiet start to the third quarter ahead of key data releases