The Swiss Franc has continued an astonishing rally after the Swiss National Bank President Thomas Jordan said on Thursday that the bank is ready to act on inflation, currently at 2.5%.

USD/CHF spent barely 4-days above parity before collapsing to now be gyrating around 0.9700. The US Dollar lost ground everywhere going into the New York close and has been steady through the Asian session. Treasury yields also went much lower.

Elsewhere, Japanese headline inflation hit expectations of 2.5% year-on-year, but their preferred core measure was a slight beat at 2.1% against 2.0% anticipated for the same period.

In an interview with Bloomberg, Japan’s former Vice Minister of Finance Eisuke Sakakibara, known as Mr Yen, said that USD/JPY could go to 150. He cited the widening gap in monetary policies between the Bank of Japan (BoJ) and the Fed for the call.

Wall Street continued their slump in the cash session overnight, although futures markets are pointing toward a rosier start to their day.

The Fed put appears to have expired worthless with Kansas City Fed President Esther George backing up Chair Powell’s comments earlier in the week. That is, rates are going up and tight financial conditions would help to lower inflation.

APAC equities had a positive day with all the major indices up over 1% to varying degrees. China reduced the 5-year loan prime rate (LPR) to 4.45% from 4.6% in an attempt to boost the property sector that has been under pressure.

With a lower US yields and USD, gold managed a decent rally and has held on to them today, trading US$ 1,840. Crude oil is slightly softer with the WTI and Brent futures contracts straddling US$ 111.00 bbl.

Aside from UK retails sales data, the market will looking at central bankers comments crossing the wires today.

The full economic calendar can be viewed here.

USD/CHF made a 2-year high at 1.0049 last week and has since collapsed toward 0.9700. That peak may offer resistance if visited again. 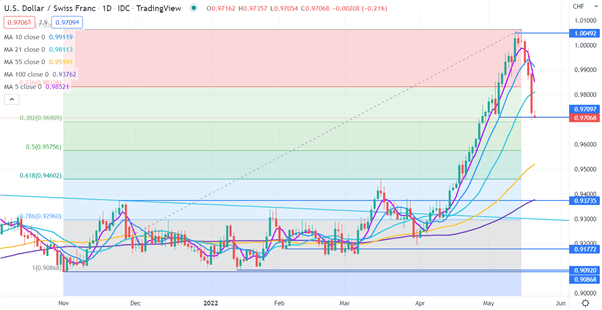