Crude Oil Prices Balk at Recent Highs After Risk Sentiment Turns. Where To from Here?

Crude oil is slightly softer in the Asian session today after bumping up against recent highs. The WTI futures contract is trading under US$ 109 bbl while the Brent contract is below US$ 110 bbl.

Markets were buoyed at the start of the week, but very soft Chinese economic activity data pared back risk appetite.

Chinese industrial production came in at -2.9% year-over-year to the end of April against 0.5% forecast and March’s print of 5.0%.

The Australian Dollar was the most impacted by the news, collapsing under 69 cents against its US counterpart again. The Kiwi was also dragged lower while the US Dollar and Japanese Yen benefitted the most.

Elsewhere, wheat prices surged higher after the Indian government announced a ban on exporting of the grain. It had been anticipated that India would fill a gap in supply created by the Ukraine war.

The wheat futures contract on the Chicago Board of Trade (CBOT) traded limit up on today. It had been anticipated that the Indian harvest could replace a large part of the shortfall.

Food security could become a focus for markets. Globally, other wheat belts have seen unfavourable weather conditions, particularly across North America. Wheat production there is at its lowest level since 1963.

Saudi Aramco, which recently became the world’s largest company, announced a surge in profits on the back of higher oil prices. First quarter net income was USD 39.5 billion against USD 31.1 billion for the fourth quarter last year.

Treasury yields softened in the Asian session after popping up a few pips on Friday across the curve. The benchmark 10-year note is at 2.91% at the time of going to print.

Looking ahead, comments from a number of central bank speakers will be crossing the wires and Canada will report housing starts data.

The full economic calendar can be viewed here.

WTI crude oil continues to consolidate in a wide range. This phase has seen volatility move lower as illustrated by the narrowing of the 21-day simple moving average (SMA) basedBollinger Bands. 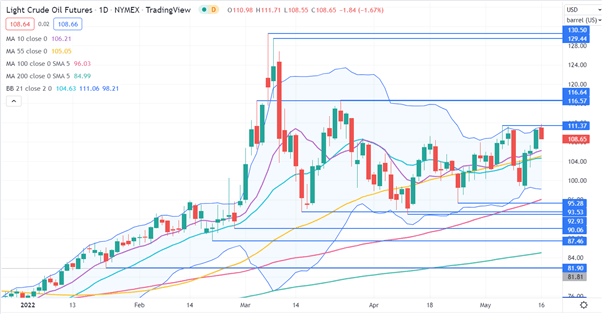 Forex Today: Optimism fades at the start of the week