This week provided the first glance at the economic impact of Omicron. As it turns out, the damage wasn’t as bad as feared, at least according to early economic indicators. Hot off the press, the jobs report came in faster, higher and stronger than anticipated by the market consensus. The economy pulled off an Olympic medal’s worth performance, adding 467k jobs in January (Chart 1). December and November data were revised up adding another 709k, bridging the employment gap to less than 2% of its pre-pandemic level. The laggard industry remains leisure and hospitality, where employment rose by 151k, but remains well below its pre-pandemic peak. 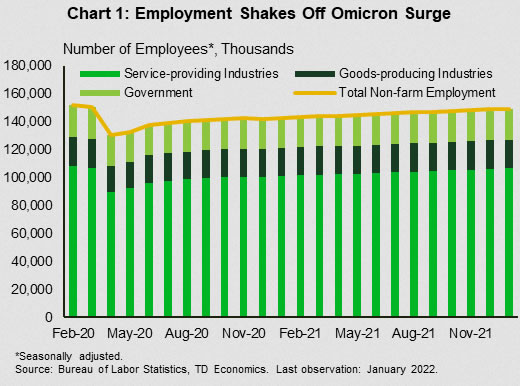 This week’s Institute for Supply Management (ISM) reports filled in the narrative from the business perspective. Both the manufacturing and services sector indexes slowed in January, but continued to expand at an above-trend rate, with readings of 57.6% and 59.9%, respectively . As expected, Omicron weighed on demand, with services business activity dropping by 8.4 percentage points (ppts) and manufacturing production softening by 1.6 ppts. Some demand softening is a blessing in disguise as it helped reduce backlogs of orders, which dropped by 6.4 and 4.9 ppts for manufacturing and services sectors, respectively. Notably, demand for services still has room to grow, as it has not yet fully recovered from pandemic-related restrictions. Once the threat of Omicron fades, consumers are likely to direct more of their spending to services, giving the sector some added oomph.

At the same time, supply constraints may take a longer time to attenuate. Supplier delivery times remained relatively flat for manufacturing and increased marginally for the services sector (following a sizeable reduction in December). The tone of respondents’ comments on disruptions hardly lost its zing as the “lack of supplier manpower” continues to push prices up, affecting industries across the economy.

Nowhere is the impact of supply disruptions on prices more apparent than in the auto sector. This week, auto sales surprised with solid growth, reaching the highest level in seven months (Chart 2). The improvement can be attributed to a solid recovery in production, which was able to reduce the pre-pandemic gap from 30% in September to 8% in December. While chip shortages continue to affect the industry, anecdotal evidence suggests that Omicron has so far had a less dire impact on semiconductor supply chains compared to Delta. 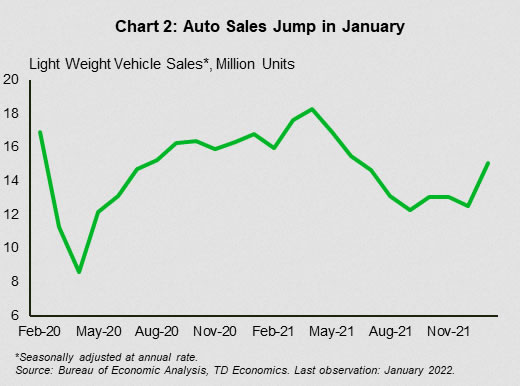 All in all, early economic data suggest that the negative impact of the virus continues to diminish with each subsequent wave. Nevertheless, the equity market continued skating on thin ice as stock prices gyrated in sync with the earnings performance of individual tech companies. The bond market, meanwhile, reacted strongly to the employment data with yields rising by almost 10 basis points (bps) to an overall increase of 13 bps for the week (as of writing). This makes sense. With few signs of waning strength in the labor market, a data-dependent Fed is likely to act decisively to raise the federal funds rate starting at its next meeting in March. Balance sheet normalization shouldn’t be too far behind, but its pace is likely to be “gradual and not disruptive”, in the words of San Francisco Fed’s President Mary Daly.

This week we finally got a glimpse of the damage to the economy from the Omicron wave. The employment report released earlier today showed the economy shed 200,000 jobs in January. As a result of these losses, the unemployment rate rose to 6.5% from 6.0% a month earlier. Job losses were heavily concentrated in industries hard-hit by restrictions, such as accommodation & food (-113k) and culture & recreation (-48k) (Chart 1). Younger workers, who tend to work in those industries, were disproportionately affected. Seventy percent of the jobs lost in January were among workers aged 15 to 24. 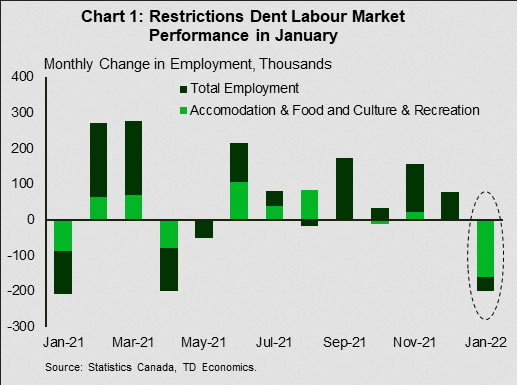 In addition to the job numbers, earlier this week we also received November’s GDP data. While somewhat outdated, the report had a few important takeaways. First, it reaffirmed that the economy was expanding at a healthy clip prior to restrictions. GDP rose by 0.6% (month-on-month) in November, finally recovering to the pre-pandemic level (Chart 2). November’s solid increase in activity was broad-based, spanning both the goods-producing sector and the still-recovering services industries. 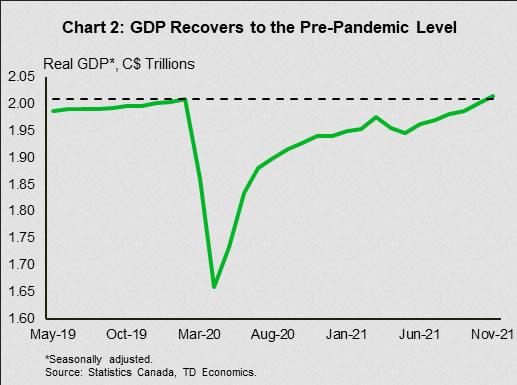 Secondly, on the goods side, there were signs that supply chain bottlenecks were easing prior to the most recent wave of the virus and the manufacturing sector was beginning to hum again. Auto production edged higher for the second consecutive month. With demand and prices for energy soaring, petroleum production also jumped. Lastly, while the severe floods in British Columbia did impact certain industries such as coal mining and wholesale of farm products, the overall impact on growth was small. Still, as expected, the Omicron wave slowed activity in December, with Statistics Canada’s preliminary estimate suggesting that the GDP remained flat on the month. As evidenced in the job report, January is likely to be worse, with restrictions and staff absenteeism weighing on growth.

There are good reasons to look past the near term setback. Case loads have been falling, and both Ontario and Quebec eased their restrictions this week, suggesting that the economy and labour market will regain the spring in their step. As the labour market tightens further, stronger wage growth should…