Since the start of trading this week, the price of USD/JPY has been subjected to profit-taking after the storm of support for the dollar passed by the US Federal Reserve. It confirmed that the March meeting will be the starting point for raising US interest rates. The dollar-yen pair is stabilizing around the 114.60 level at the time of writing the analysis, awaiting the reaction from the announcement of the US job numbers by the end of the week.

US stocks have been in the doldrums so far this year as investors have been exposed to a long list of threats to economic growth and markets. Economic recovery is threatened by persistently high inflation, which has driven up costs for businesses and consumers. The bigger fear is that higher prices passed on to consumers will eventually reduce spending and disrupt economic growth.

The US Federal Reserve is changing monetary policy and plans on raising interest rates to fight rising inflation, which will affect investments and stock prices. Extremely low rates and other incentives helped the markets recover from the initial shock of the coronavirus pandemic, then supported the impressive gains. Investors are expecting the Fed to start raising rates in March, but there is a lot of uncertainty about how aggressively and how quickly the Fed will move over the course of the year.

The virus pandemic remains an ongoing threat and each new variable could lead to an increase in cases that threaten businesses and consumers. Investors are reviewing the latest round of earnings, in part to see how inflation, the virus pandemic and other factors will affect business and its operations going forward.

Facebook affiliate Meta Platforms will report earnings results Wednesday, while Amazon and Ford will report results on Thursday. Investors are also looking forward to the US Labor Department’s January employment report, which will be released on Friday.

On the economic side, according to a new monthly report, the loss of manufacturing jobs, along with other factors, has slowed growth in the regional economy of nine Midwest and Plains states. Business leaders in nine US states in the Midwest and Plains have reported job losses, persistent supply chain problems, and rising inflation. The general index for January fell to 56.2 from 64.6 in December. Any index score above 50 in the survey indicators indicates growth, while a score below 50 indicates recession.

Conditions also had a rollercoaster effect on the survey’s business confidence index, which looks ahead to six months. After rising to 64.0 in December, the index fell in January to 36.2 – the lowest reading since the start of the pandemic. He blamed disappointing job numbers, supply chain issues and rising inflation, along with added concern over the Federal Reserve’s promise to raise interest rates from March.

According to the technical analysis of the pair: Despite the recent performance, the USD/JPY currency pair can control the performance upwards by returning to the vicinity of the 115.00 psychological resistance, which is the closest to it currently. On the downside, and according to the performance on the daily chart, the 113.35 support is still the most important for the bears to control the trend. The currency pair may remain moving in narrow ranges until the release of the US jobs numbers on Friday. Until that moment, investors’ appetite for risk or not will have the strongest impact on the pair’s performance. 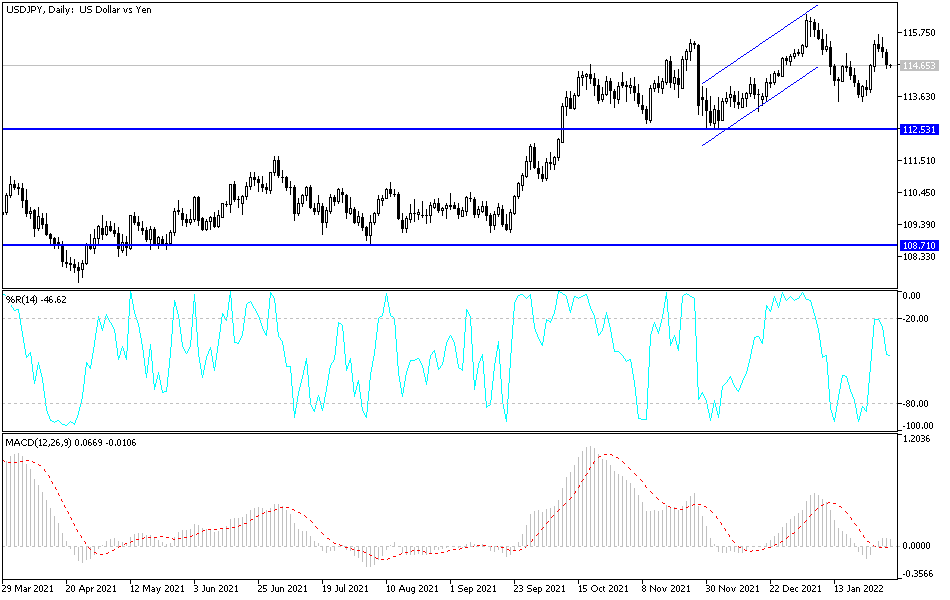