Our expectations indicate that natural gas will rise during its upcoming trading.

Spot natural gas prices (CFDS ON NATURAL GAS) rose during the recent trading at the intraday levels, to achieve daily gains as of this writing by 1.28%. It then settled at the price of $5.137 per million British thermal units, after declining slightly in yesterday’s trading. It was a volatile session as it reached -0.70%, thus breaking a series of gains that continued for seven consecutive sessions.

After a streak of straight gains, natural gas futures faltered on Tuesday, as forecasts retreated from the intensity of cold weather expected in the US state of Texas later this week. Warmer weather in Europe combined with increased flows of Russian gas to the continent also affected US markets, with the Nymex gas futures contract for March down 12.3 cents to $4,751/MMBtu. The April contract settled at $4.573, down by 10.2 cents.

Spot gas prices were mixed but fell overall thanks to significant declines in the Northeast United States, NGI’s Spot Gas National Avg. by 46.5 cents to settle at $6.125.

Although there is no dispute that the widespread cold will cover most of the United States this week, weather models in recent sessions have shown a non-cold pattern in Texas. However, lower temperatures were expected in the 20s as far south as the Texas coast, with cooler temperatures in the northern half of the state.

Tuesday’s selloff could have been supported by the market digesting the news that Russia is sending more gas to Europe. As a result of Russian imports combined with milder temperatures, European gas prices fell on Tuesday.

Technically, the price stopped yesterday for a short break to recover, during which to reap the profits of its previous rise. It will also try to gain some positive momentum that might help it reap more gains in its upcoming trades. At the same time it tries to discharge its clear overbought by the relative strength indicators, especially with the start of the emergence of negative cross out.

All of this comes amid the continuation of positive support for its trading above its simple moving average for the previous 50 days. It was affected by the breach of a bearish corrective trend line earlier, and in light of the dominance of the main bullish trend over the medium term, as shown in the attached chart for a (daily) period.

Therefore, our expectations indicate that natural gas will rise during its upcoming trading, throughout its stability above the level of 4.740, to target the first important and nearby resistance levels 5.404 in preparation for attacking it. 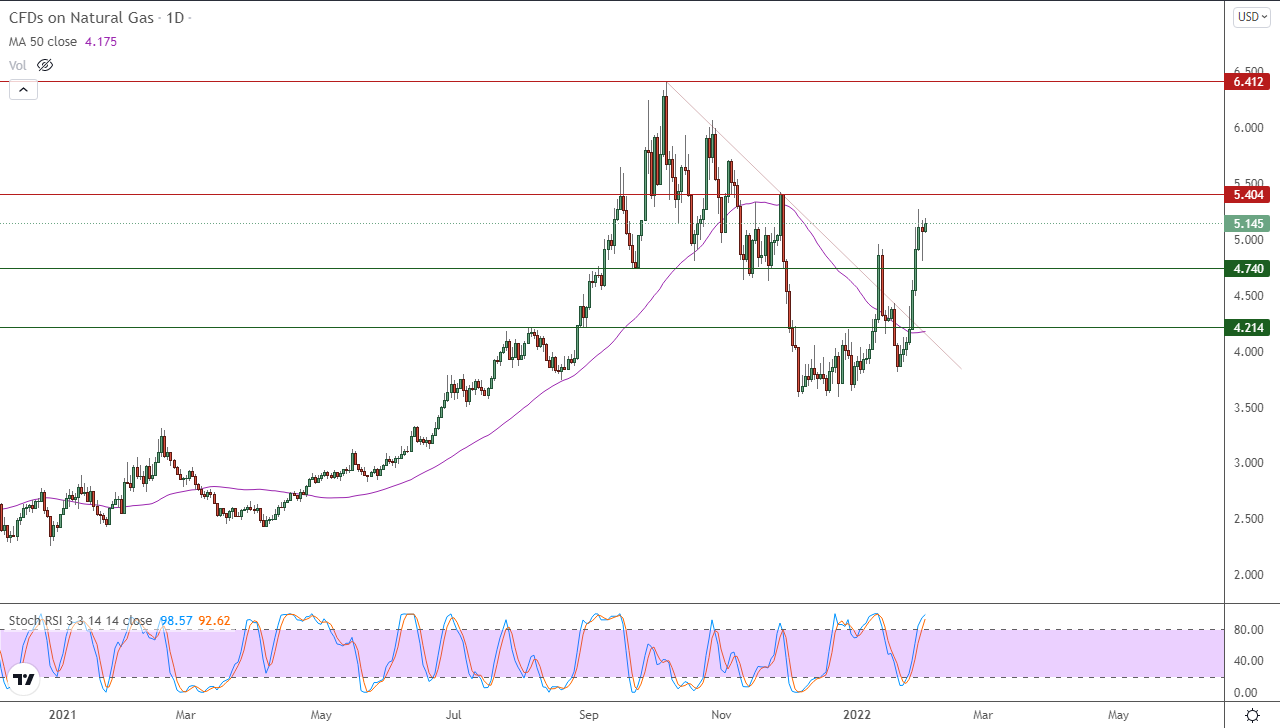