British Pound Boosted by Soft US Dollar. Will GBP/USD Rally into BoE This Week?

The British Pound has rallied against a sinking US Dollar, but it has struggled against the Euro ahead the Bank of England Monetary policy meeting on Thursday. According to a Bloomberg survey, it is anticipated that they raise rates by 25 basis points to 0.50%.

The US Dollar was softer across the board as last weeks Fed decision continues to be digested by markets.

The RBA tightened monetary policy today, but it wasn’t hawkish enough to please currency markets. They abolished the asset purchase program but left rates unchanged at 0.10% for the cash rate target.

The Australian Dollar was over 1% higher ahead of the RBA’s decision but fell around 0.5% on the news before recovering the intra-day-loss.

Crude oil continues to press higher to start the month after a 17.2% rally in January. Geopolitical risks on the Ukrainian border, OPEC+ inability to lift production supply and an icy storm front heading into North America have all propelled black gold higher.

Many Asian markets were close due to Chinese Lunar New Year. Australia, Japan and New Zealand saw their equities move higher following on from a strong lead from Wall Street.

The Nasdaq was up 3.41% in the cash session, but futures markets are pointing toward slight weakness for the North American open for the US indices.

GBP/USD has recovered from a sell-off going into the weekend. Friday’s close was below the 21-day simple moving average (SMA) based Bollinger Band.

Monday’s close was back inside the Bollinger Band. This could indicate a pause in bearishness or a potential reversal. 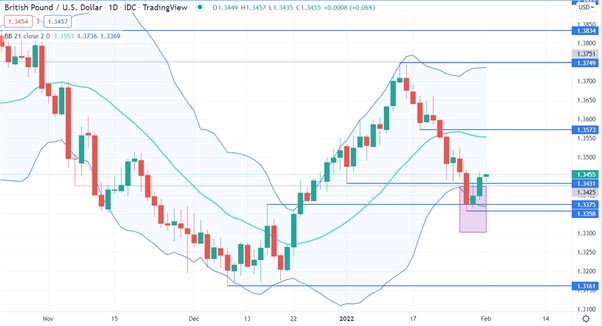 
Read More : British Pound Boosted by Soft US Dollar. Will GBP/USD Rally into BoE This Week?

What Will Happen to Bitcoin in February? – Action Forex

Despite higher taxes on gold imports, current account deficit to more than double:

US Fed meeting to dollar index: Top 5 triggers for yellow metal next week

NZD/USD: Forecast of 0.66 by year-end will be difficult to achieve – ANZ