Since trading at nearly 62.25 USD on a spike downwards on the 2nd of December, WTI Crude Oil has reversed its path and has established long-term highs. As of this writing, and likely going into February, the commodity is challenging the 87.00 USD price level per barrel and has shown little signs of relenting its upwards momentum.

Lower prices can certainly happen and speculators with experience know this and will practice risk management. However, WTI Crude Oil not only has technical charts firmly displaying a bullish trend, but it also has some fundamental news and data which is likely helping fuel the rather steady climb.

In late October of 2021, WTI Crude Oil did hit highs of 85.00 USD, but last week’s trading of the commodity has beaten those values. 100.00 USD per barrel of WTI has certainly been seen in the past, but the current price of the commodity is certainly at long term highs. The last time crude oil hit its current price levels was in early October of 2014. While ten-year charts will be needed by traders to perhaps gain perspective, experienced commodity traders have seen higher prices before. In June of 2014, WTI Crude Oil traded near the 105.00 USD level.

Speculators may feel uncomfortable chasing buying positions at the current highs, but resistance levels have proven vulnerable the past two months. After topping October 2021 highs the past week of trading, WTI Crude Oil may have further room to traverse higher. Before traders get overly ambitious and decide to target the 100.00 USD level, they should remind themselves to be realistic. Cautious leverage and the ability to cash out winning trades is a solid risk-taking tactic for day traders.

The 90.00 USD price could prove to be important, but if this level is surpassed speculators should not be surprised to see higher levels develop for WTI Crude Oil. International data point to rather low inventories of energy. Also, natural gas prices are climbing as colder weather has swept across much of North America and Europe. There are also geo-political concerns regarding Russia and the Ukraine which may be effecting trading sentiment as ‘noise’ is generated and may be causing nervous behavior to stock up on WTI Crude Oil orders.

Traders who are tempted to be sellers of WTI Crude Oil should be conservative with their price goals. Certainly, reversals will occur, which will take the price of the energy lower periodically, but support levels may also prove to be rather intriguing places for bullish speculators to re-ignite buying positions. The two-month trend upwards in the commodity may run out of power, but betting on a strong reversal lower which destroys support levels in the coming weeks feels rather unlikely at this moment.

If WTI Crude Oil does manage to begin trading lower, the 82.00 to 80.00 USD levels could prove important as support.  If for some reason prices are able to penetrate these values lower, some sellers could target the 78.00 juncture. The last time WTI Crude Oil traded below 80.00 USD was on the 11th of January, and the low during the past month for the commodity was near 74.25 in the first week of the month.

If WTI Crude Oil pushes past 88.00 USD per barrel, traders will certainly start to look at the 89.00 to 90.00 marks as targets. Even in the midst of rather choppy trading conditions on Wall Street and on the major global equity indices the past three weeks; WTI Crude Oil has gained at a solid incremental pace.  If the commodity pushes past 90.00 USD sooner rather than later, traders may see volatility ramp up in WTI Crude Oil as speculators aim for potentially higher prices and pursue additional buying positions. 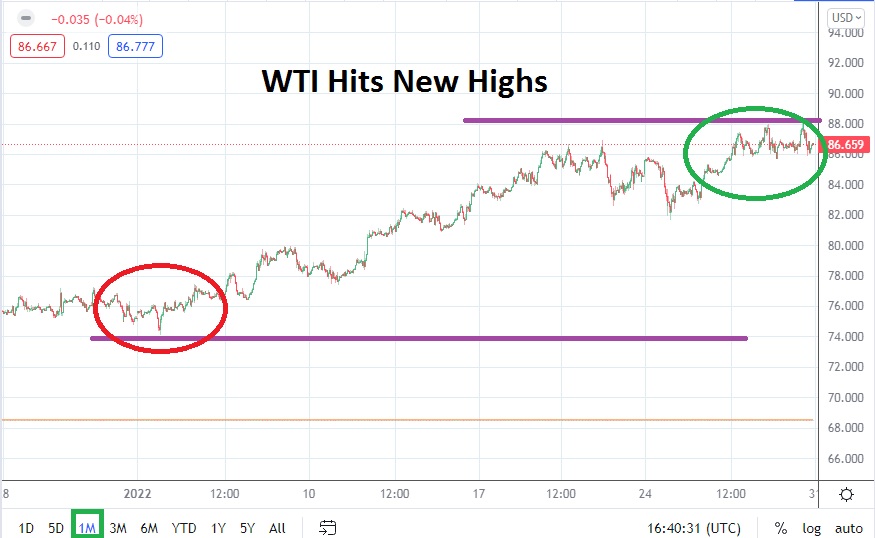 Forex Today: The US dollar stumbles despite a risk-off environment