EUR/USD: Surprises from the US Federal Reserve

The meeting of the US Federal Reserve FOMC (Federal Open Market Committee) and the subsequent press conference of its management was certainly the main event of the last week. JP Morgan analysts called the speech of Jerome Powell, the head of the US central bank, the most “hawkish” of all during his tenure.

As for the first increase in the federal funds rate this year, there were no surprises: it is likely to take place in March, as planned. True, Jerome Powell did not answer the question of how much it will be increased, 25 or 50 basis points (bp). But at the same time, he made it clear that the Fed will be quite “agile” and “intractable” from now on. Apparently, the regulator will no longer pay attention to either the coronavirus omicron strain or the stock indices collapse and will focus on controlling inflation.

The number of possible increases in the refinancing rate in 2022 was a real surprise for the markets. Powell’s speech led to the market upgrading the probability of three increases by June from 45% to 60%. In total, there can be five or six of them this year. For example, Deutsche Bank experts forecast a 25 bp rate hike in March, May, and June, and two more acts of monetary restriction before the end of the year. And their colleagues from BNP Paribas have set their sights on six raises. There may even be seven of them If inflation continues to be at a high level in the second half of the year. After all, the head of the Fed has made it clear that the main tool to fight inflation will be the federal funds rate.

In addition, the US Central bank has decided to double the pace of rolling back its quantitative easing (QE) program. The volume of government bonds repurchases will decrease by $20 billion per month from next month (now $10 billion), and of mortgages by $10 billion (now $5 billion).

All of these hawkish signals have shown that the regulator’s stance has become much tighter and have made a huge impression on the derivatives market. The direct correlation between government bond yields and the DXY dollar index was restored, and the index jumped above 97.35.

Recall that the euro is the basis of the basket of 6 world currencies that form the DXY, with a share of 57.6%. Therefore, the European currency played a leading role in the growth of the index and the strengthening of the dollar in the current situation. The difference between the Fed’s hawkish stance and the ECB’s dovish stance has been repeatedly spoken about. The European Central Bank intends to only start raising the rate in 2023, while its counterpart overseas will already be completing this program. And such a divergence does not bode well for the Old World currency. 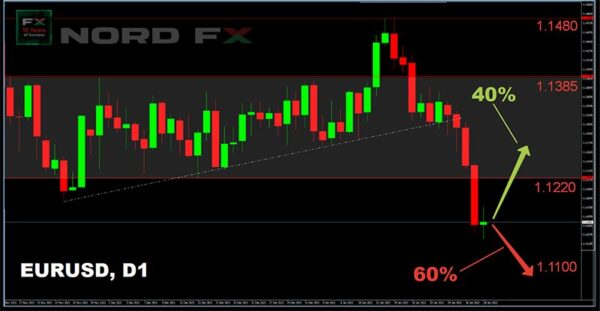 The EUR/USD pair lost more than 220 points at its high in the past week alone, which was a record for the last seven months. The local bottom was found on Friday, January 28 at the level of 1.1121, followed by a slight correction and a finish at 1.1148.

Of course, if the US Federal Reserve conducts an ultra-aggressive tightening of its monetary policy, it can lead to a sharp reduction in consumer demand, with all the ensuing problems. But this is not happening so far. And it will always be possible to soften the position even if it ever happens. Therefore, the probability of the pair falling towards 1.1000 is very high. This is the figure that sounds both in the forecasts of strategists and the Internationale Nederlanden Groep, as well as the Canadian Imperial Bank of Commerce.

As for the calendar of the upcoming week, the attention of the market will be mainly focused on the ECB meeting on Thursday, February 03. It is not likely to present any special surprises, and the interest rate will remain the same, at the level of 0%. However, certain changes in the monetary policy of the European regulator are still possible. And investors expect to learn about them at the final press conference.

In general, the week will be full of macro-economic statistics. There will be data on the GDP of the Eurozone and the consumer market in Germany on Monday, January 31. The volumes of retail sales in Germany, the ISM business activity index in the US manufacturing sector, as well as the results of a study of the European banking sector will be announced on Tuesday. There will be statistics on the Eurozone consumer market and the level of employment in the private sector in the US on Wednesday. The value of the ISM business activity index in the US services sector will become known on Thursday. And in addition to data on retail sales in the Eurozone, we are traditionally waiting for a portion of statistics from the US labor market, including the number of new jobs created outside the agricultural sector (NFP) on the first Friday of the month, February 04.

GBP/USD: How Will the Bank of England Respond?

The Markit Services PMI for the UK released on January 24 came in below the forecast at 53.3 versus the expected 55.0. Further, the expected active increase in rates by the Fed, and then preliminary data on US GDP for the fourth quarter of 2021, played on the side of the dollar. They showed an increase that no one expected: 6.9% against the forecast of 5.5% and the previous value of 2.3%. Apparently, the US economy has not only recovered from the COVID-19 attack but has recovered so much that economic growth has even surpassed the 2019 figures.

All this has not benefited the British currency of course. And then there are the demands for the resignation of British Prime Minister Boris Johnson, which the market regarded as another bearish factor. As a result, the GBP/USD pair fixed a low at 1.3357, falling by almost 400 points in two weeks.

Can the pound return to growth even despite the US Fed’s hawkish stance? We are likely to get an answer to this question soon enough.­ After all, in addition to the ECB meeting, there will also be a meeting of the Bank of England on Thursday, February 03. How can it respond to the Americans? Of course, by a faster rate increase: according to a number of forecasts, the pound rate may be increased by another 0.25 bp, up to 0.50%.

For how long will the British currency have such support? Many analysts doubt that the actions of the Bank of England will meet market expectations, and that the regulator will act as aggressively as the Fed this year. Based on this, economists at…

S&P 500 Forecast for the Week Ahead

This is a Crazy Crypto Trade Idea… | Forexlive

BlockFi sells itself to FTX in earnout-laden deal | Forexlive

The cryptocurrency market is stuck at past highs | Forexlive

How Far down Is the Bear Market Taking Ethereum (ETH)? – FX Leaders