TAILWINDS FOR THE RAND

The South African rand remains at the top spot globally as the best performing currency in 2022 against the U.S. dollar. A recent boost added to the already flourishing ZAR with South African inflation for the December period beating estimates and consequently adding to rate hike bets later this month (27th January) when the SARB MPC meets. A rate hike should maintain carry trade appeal in line with anticipated U.S. rate hikes. From a year-on-year perspective, the December reading was the 5th consecutive increase which could have serious consequences for the average consumer should the problem persist. 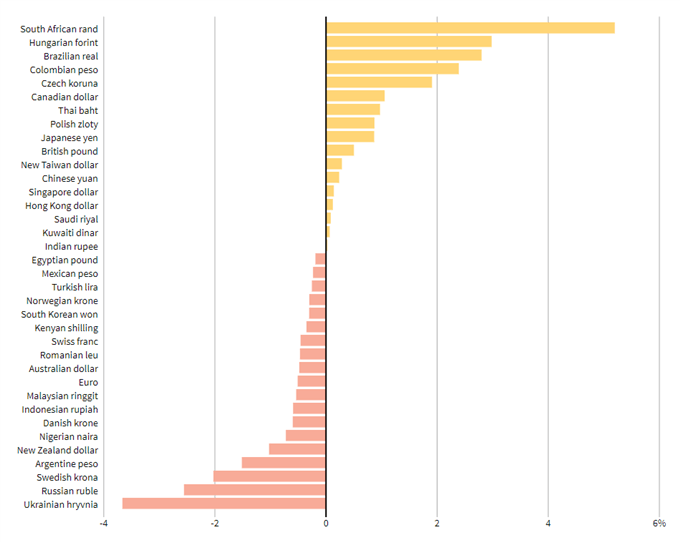 Recent Chinese rate cuts to key rates in hopes to bolster a slowing economy should lend itself to a supportive environment for the rand with China being such an integral trading partner with South Africa.

An overextended dollar could be further exacerbated next week (a day before the SARB meeting) should the Federal Reserve underwhelm markets who are expecting a stout hawkish narrative.

HEADWINDS FOR THE RAND

Local unemployment rates lingers at record highs, reflecting a poor labor market and could be aggravated by steep rate hikes. The battle between inflation and the local economy will prove to be a tricky path to navigate without letting either variable get out of hand.

Russia-Ukraine tensions which have flared up this Friday have resulted in a broad based risk-off reaction from markets however, rand headwinds have managed to shrug off any negativity for now.

Omicron although dwindling in terms of market factoring, remains a major influence in China and has shown to add to inflation woes globally with lockdowns in various regions across the nation. This zero tolerance approach is opposing current efforts to stimulate economic growth and therefore hamper rand gains. 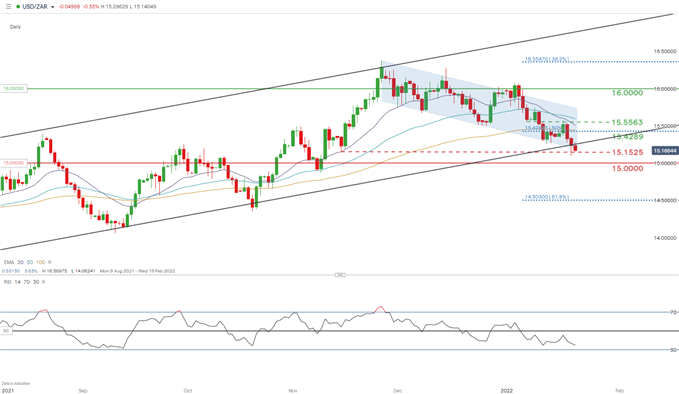 Channel support has broken once more, last seen since October last year with support found at the November swing low at 15.1525. The lower long wick left behind by yesterday daily candle suggests the possibility of an upside move to come. Although the Relative Strength Index (RSI) is deep in bearish territory, USD/ZAR is slowly approaching oversold territory.

There is room for additional downside to the 15.0000 psychological handle but price action is highly dependent on next week’s interest rate decisions which should allow for some directional bias.

EUR/SEK: Growth concerns keep risks tilted to the downside for the krona – MUFG

Gold Violates Symmetrical Triangle Pattern – Is It Going After $1,785? –…

Wake Up Wall Street (SPY) (QQQ): Worst first half ever? Not quite, but not far off