UK PM Boris Johnson is fighting to save his political career after a humiliating defeat in the North Shropshire by-election. The by-election, triggered after Conservative MP Owen Patterson’s resignation, saw a swing of 34% to the Lib Dems, a humiliating defeat for PM Johnson who originally backed Owen Patterson during the sleaze allegation inquiry. This is the latest in a series of political body-blows for the PM and with some MPs within his party already voicing their concerns over his leadership, his time as Prime Minister may be shorter than originally expected. The UK bookmakers are currently offering skinny odds on Boris Johnson being the Prime Minister at the end of 2022 and while this pressure remains Sterling may find further upside difficult in the short-term at least.

The latest look at the state of the UK high street showed that shoppers returned in November with sales beating market expectations. This data follows a strong UK Labour Report this week and also suggests that inflation – headline inflation at a decade-high of 5.1% in November – may prove to be stickier than the BoE would like.

Cable is currently trading on either side of 1.3320 and may remain around these levels in the coming days. Yesterday’s surprise Bank of England interest rate hike gave GBP/USD a shot in the arm with the pair jumping to 1.3375 before settling back down just below 1.3350. Support remains around 1.3165 and 1.3200 and this should hold with the UK economic backdrop looking stronger. Resistance between 1.3353 and 1.3383 may prove difficult to overcome, especially when the PM’s political career hangs in the balance. 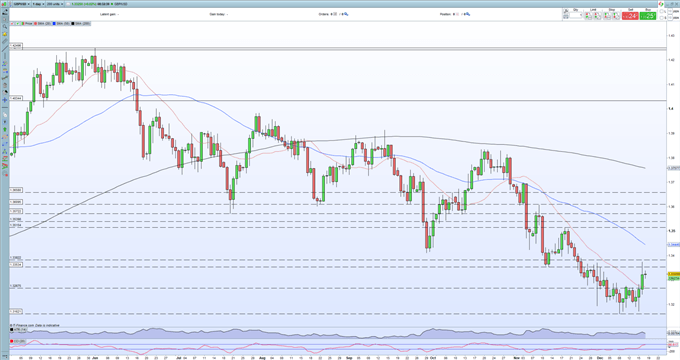 We typically take a contrarian view to crowd sentiment, and the fact traders are net-long suggests GBP/USD prices may continue to fall. Traders are further net-long than yesterday and last week, and the combination of current sentiment and recent changes gives us a stronger GBP/USD-bearish contrarian trading bias.

What is your view on GBP/USD – bullish or bearish?? You can let us know via the form at the end of this piece or you can contact the author via Twitter @nickcawley1.

Recipe for success: how The Bear captures the drama of a restaurant