In something of a surprise, the U.S. dollar has weakened over the first few weeks of this year and emerging market currencies have outperformed. A sharp shift in monetary policy stance from the Fed supported the greenback late last year but has done little to help the dollar so far in 2022; however, once the “buy the rumor, sell the fact” dynamics come to an end and markets focus on underlying fundamentals, the U.S. dollar should strengthen going forward. We also expect emerging market currencies to come under the most pressure in 2022-2023 as tighter Fed policy, higher bond yields and local political developments result in weaker currencies across the emerging markets spectrum.

Dollar Down This Year, EM Currencies Leading The Way

The first few weeks of 2022 have surprised us. Just over the past two weeks, financial markets have priced a significantly more hawkish Fed. Instead of two rate hikes this year, market participants, including us, now forecast four hikes. And what seemed unlikely at the start of the year, economists and strategists alike have taken the FOMC’s guidance and now forecast the Fed to begin shrinking its balance sheet in the second half of the year. Despite the Fed’s latest and sharp shift in its monetary policy stance, the U.S. dollar has depreciated against most foreign currencies. Through the first few weeks of this year, the U.S. dollar index (DXY) is down 0.15%, indicating depreciation against G10 currencies. Dollar weakness has also spread into the emerging markets as currencies across Latin America, Asia and the EMEA (Europe, Middle East, Africa) region have strengthened against the greenback.

We can point to a few likely reasons why the dollar has started 2022 on the back foot, the first being Fed Chair Powell’s commentary at his U.S. Senate confirmation hearing. When questioned about the direction of Fed monetary policy, Powell indicated the FOMC will look to raise interest rates in a way where the U.S. and global economic recovery will not be interrupted, a comment somewhat supportive of foreign currency and especially emerging currency sentiment. In addition, U.S. December inflation data was “as expected”, a break from several months of upside surprises and a factor that may have reined in the U.S. dollar to some extent. And finally, there may also be capital flows from the U.S. to foreign markets. To that point, by many measures, U.S. equities are currently relatively expensive, while international equities could be more fairly priced. In order to potentially take advantage of more attractive valuations abroad, investors could be shifting capital toward international equities. Major equity index performance year-to-date supports this thesis, as the S&P500 is down 2.5% this year, while major European and emerging market equity indices have positive returns to start the year. 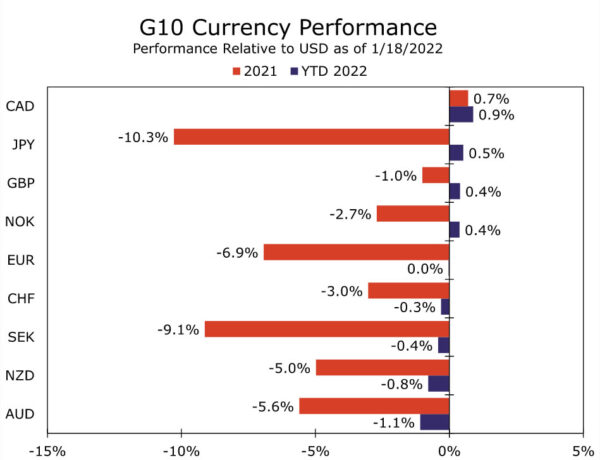 Foreign currency strength has been significant enough where currencies across the G10 and emerging markets have broken through key technical levels. 50-day, 100-day, and in some cases, 200-day moving averages have been breached, suggesting the current trend could continue for the time being. Following a year when foreign currencies largely underperformed, G10 currencies are mixed, but on balance, performing solidly (Figure 1); however, emerging market currencies are outperforming more broadly. With the exception of select outliers where idiosyncratic issues are factors (i.e: Russia, Turkey and Argentina), just about all major emerging market currencies have strengthened this year (Figure 2). To date, the Peruvian sol is the top performing currency, strengthening over 4%, as the central bank maintains a hawkish monetary policy stance amid its commitment to contain elevated inflation and as political risk tied to President Castillo’s administration eases. Similar dynamics exist in Chile as inflation remains high and the central bank remains committed to interest rate hikes to bring CPI within target. In addition, the election of Gabriel Boric has yet to yield concerning rhetoric, also supporting the Chilean peso. On down the list, emerging market currencies from the South African rand to the Chinese renminbi have strengthened, despite underlying fundamentals associated with most developing economies still rather fragile. 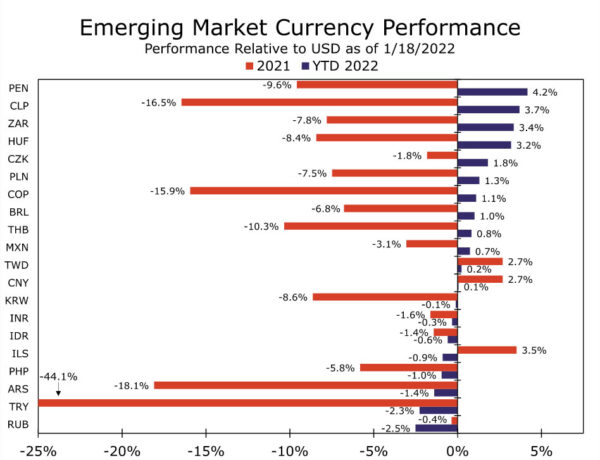 But, Don’t Expect The Rally to Continue

In our view, the dynamics that have supported foreign currencies, in particular emerging market currencies, are unlikely to persist for an extended period, and we maintain our view for a stronger U.S. dollar as 2022 progresses and into 2023. Despite the Fed’s guidance on monetary policy doing little to support the dollar early this year, we believe actual changes to policy settings could and should result in capital flows back toward the U.S. dollar. Should the Fed start raising interest rates in March or shortly thereafter, the relative attractiveness of the U.S. dollar could improve, and we believe, can support the greenback going forward. In addition, we believe market participants will eventually begin to focus on underlying fundamentals associated with individual economies. In that sense, the U.S. economy is still a relative outperformer as underlying fundamentals associated with the American economy remain sturdy. Economies across the G10 are still lagging the U.S., while most developing economies have struggled to gather or maintain economic momentum since the start of the pandemic. As the focus shifts back to country-specific fundamentals, we believe investors will again divert capital back towards U.S. dollar denominated assets, which should be supportive of the greenback over time.

We believe the dollar can strengthen against G10 currencies; however, we expect the most pronounced strength to come against the emerging markets. Tighter Fed monetary policy and higher bond yields in the United States have historically weighed on emerging currencies, and we expect these dynamics to play out over the course of this year. In addition to higher bond yields, we expect local political developments in many developing countries to also be a source of currency depreciation in 2022. Latin American politics shifted sharply left last year, and we believe new policy platforms and political ideologies in countries such as Chile and Peru can still weigh on these currencies. In addition, Presidential elections will take place in Brazil and Colombia this year, and we expect left-leaning politicians to gather significant momentum in the lead up to each vote. Political risk tied to each election should also weigh on the Brazilian and Colombian currencies this year. In the EMEA region, unorthodox policy should continue to weigh on the Turkish lira, while a fragile economy and heightened political risk in South Africa should keep the rand on the back foot. In Russia, while the underlying fundamentals of the economy are strong, geopolitical tensions with the U.S. related to Ukraine and other…

Britain to crack down on ‘misleading’ cryptocurrency adverts By Reuters

Recipe for success: how The Bear captures the drama of a restaurant