The difference between success and failure in Forex trading is very likely to depend mostly upon which currency pairs you choose to trade each week and in which direction, and not on the exact trading methods you might use to determine trade entries and exits.

There are a few valid long-term trends in the market, so it can be a profitable time to trade right now.

Despite the start of a new calendar year and the end of a major holiday period, last week’s market was relatively quiet, despite two pieces of high impact data being released: the FOMC meeting minutes and non-farm payrolls data. Although both these releases contained surprises, neither of them had much impact upon the Forex market, but the FOMC minutes did send the US stock market firmly lower upon its release as it indicated a more hawkish tilt to the Federal Reserve’s monetary policy. The NFP release showed a big undershoot in number of net new jobs created, but also a stronger than expected rise in average hourly earnings data.

The US dollar rose slightly, in line with its long-term bullish trend.

Risk sentiment worsened over the week, especially following the hawkish FOMC meeting minutes release, after holding up well during most of the month of December. Most stock markets ended the week lower, including the benchmark US S&P 500 Index. The NASDAQ 100 tech Index fell strongly. Commodities were mixed, but crude oil rose which was unusual in a risk-off environment. In the Forex market the Australian dollar fell, while the British pound was strong. Risk sentiment did not really explain the week’s movements in the Forex market.

The omicron coronavirus variant has spread very quickly, sending new cases soaring to record highs. However, it appears the risk of severe disease is now considerably lower due to the nature of the variant and widespread vaccination, so it seems to not be hurting risk sentiment much although it has triggered new restrictions in many countries, especially in Europe.

I wrote in my previous piece last week that the best trade for the week was likely to be long of the S&P 500 Index following a daily close above 4800, and the USD/JPY currency pair following a daily (New York) close above 115.25. This was a good and profitable call as the USD/JPY currency closed at 115.31 on Monday and ended the week higher at 115.48, giving a gain of 0.15%.

The coming week is likely to see a somewhat higher level of volatility, with market direction likely to be determined on Wednesday when crucial US CPI (inflation) data will be released. The only other major data release due over this week is US retail sales data which will be released Friday.

Last week saw the global number of confirmed new coronavirus cases rise to its highest level ever seen, with over 2.5 million new daily infections confirmed on Friday. Approximately 59.1% of the global population has now received at least one vaccination.

The weekly price chart below shows the U.S. Dollar Index printed a weakly bullish near-pin candlestick last week, after previously rejecting the resistance level identified at 12257 three weeks ago. Note how this key resistance level has held again – in fact, it held just after the FOMC release some weeks ago when it was tested, which may be a bearish sign. While this decline is not enough to invalidate the long-term trend (the price is still well above its levels from 3 and 6 months ago), it is very notable that there is clearly strong resistance here, which is having impact. This suggests that despite the long-term bullish trend, we may now have experienced a major bearish reversal. However, it is also worth noting that the price is now very close to a major support level at 12150 which continues to hold, so we may be seeing a consolidation between 12150 and 12257.

Overall, I would not look towards the USD as a key driver for any trades over the coming week.

The USD/JPY currency pair made its highest weekly close in 5 years for the third week running, but the candlestick formed is a pin candlestick which looks only weakly bullish, if at all. We do see a strong bullish trend, but the souring of risk sentiment last week had the effect of boosting the Japanese yen, so I do not want to go long here until we see a daily (New York) close above the nearest key resistance level at 116.29. 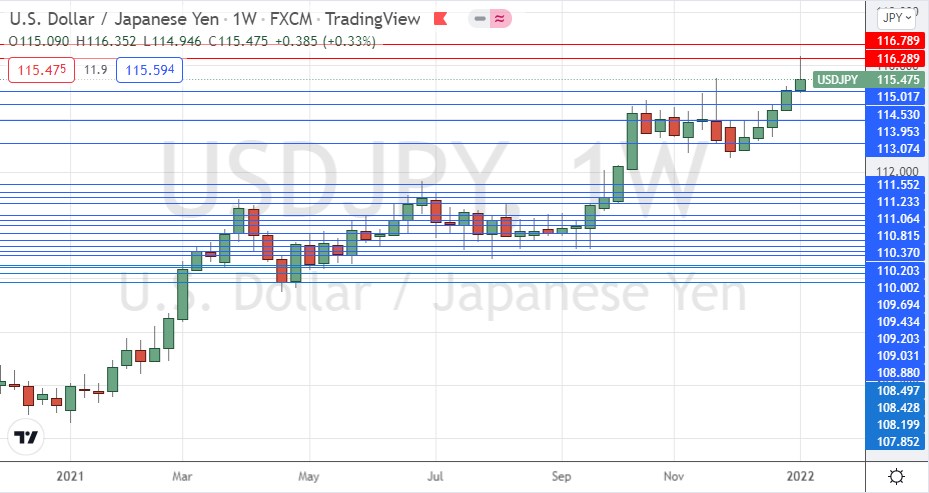 Bitcoin fell again last week for the second consecutive week, finally breaking below the key support level at $42,651 which now looks like it has flipped cleanly to become new resistance. Bitcoin has just made its lowest weekly close…