The American stock market has seen huge gains over the past two years, with the benchmark S&P 500 Index more than doubling in value since March 2020. Read on to find out whether the market will continue this rise over 2022, and if so, where the best buying opportunities are likely to be.

The S&P 500 has been bullish yet again during the year 2021, and quite frankly there is nothing on the horizon that looks like it is going to change. It is likely that the S&P 500 will go up in 2022.

In this forecast for the S&P 500 index, I am using the “SPY stock” as a proxy, simply because the best way to trade the S&P 500 is simply buy-and-hold, which means that an ETF like the SPY is a good vehicle to use to achieve this. That should be the case heading into the new year, and quite frankly even though there always seems to be some type of latest fear driven headlines, the reality is that the markets have not pulled back more than about 5% over the entire year. If you trade without any leverage, then you can ride through these types of erratic times quite easily.

The SPY is probably one of the better ways to trade this market simply because you do not have to overexpose yourself at any given moment, but you should realize that you can take advantage of the markets natural proclivity to continue rallying. In fact, when you look at the price chart shown below, you can see that the red 50-day EMA has been somewhat consistent as support, and most certainly the 200-day EMA which is colored in black, should offer the same type of support. 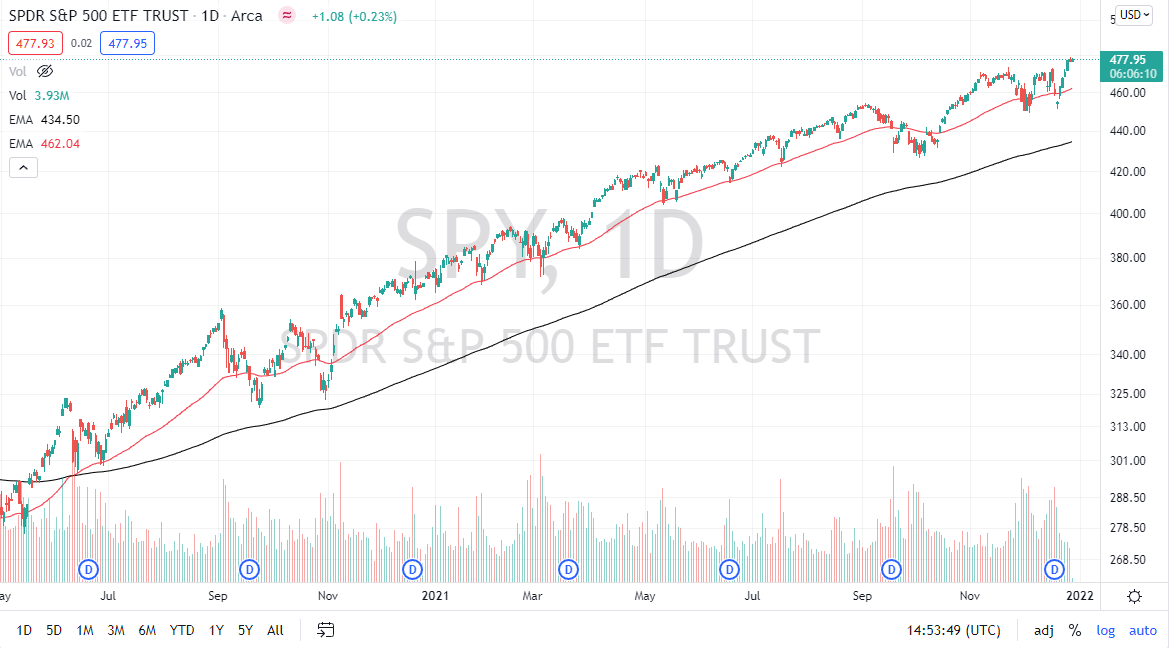 Although the Federal Reserve is starting to taper its bond purchases, it is hard to believe that this will have any significant influence on the market. Quite frankly, Wall Street already knows about this so if they were going to have some type of negative inverse reaction, then we would have already had it happen. In other words, I do not think Wall Street cares about tapering now. Furthermore, there is a lot of chatter recently that the Federal Reserve may not be able to taper bond purchases as much as people had anticipated. The Federal Reserve has been so far behind the curve when it comes to inflation, it is hard to imagine that they will not have to reverse policy quite soon. The market had its Santa Claus rally at the end of 2021, and now it appears that the early part of January will depend on whether risk appetite is willing to be put on.

At this point, I do think that price action might be a bit quiet until we get the US jobs data for January. Any pullbacks over the coming weeks should be thought of as buying opportunity but quite frankly I could have said that for the last 13 years. The 50-day EMA is sitting at $460, with the 200-day EMA sitting at $435. Ultimately, this is a market that only goes higher over the longer term, and I just do not see that changing.

If we do break down below the 200-day EMA, then it is more likely than not going to be a scenario where there is some type of major financial wrecking ball going on. However, the one thing Wall Street has been trained over the last 13 years is that if things start to fall apart, the Federal Reserve will do whatever they can to keep Wall Street in profit. All things being equal, this is a market that typically offers value every time it does drift 5% to the downside, and I do not see that changing anytime in 2022. The other thing to keep in mind when it comes to the SPY is that it is just a handful of stocks that tend to move the markets, so you need to pay close attention to all the “Wall Street darlings” that the average trader pays attention to. In other words, Microsoft, Tesla, etc.

I do not short this market, nor do I do anything in the SPY as far as buying puts, I just simply try to keep my position size reasonable and only add to it as time goes on and my position runs into increasing profit. I like to build up a position and then take little bits and pieces of profit when we have had a good run, only to turn around and add on the next dip. In other words, I am always involved one way or another, and in varying amounts. One of the main reasons for this is that this is an ETF that almost all retirement funds are involved in, so it does have a bit of a natural buffer over the longer term. Because of this, it should be thought of as an investment vehicle, not necessarily something that you are trying to trade aggressively.

Indian taxman recovers $6.62M from WazirX for evading tax on commission By Cointelegraph

Reasons Why You Should Avoid Investing in Kennametal (KMT) Now

EUR/USD to remain subdued as buyers remain on the sidelines

The Great Depression of 1929: Everything you Need to Know