WTI Crude Oil has experienced choppy trading as nervous sentiment has stirred the value of the commodity, but as January approaches the trend higher is solid.

WTI Crude Oil looks set to begin January within the higher realms of it one-month chart. That is a simple enough perception. But the fight for higher values has not been easy. Essentially from the second week of October until the middle of November, WTI Crude Oil was trading above the 80.00 USD level. Highs on the 25th of October saw the 85.00 mark challenged and this was nearly duplicated on the 10th of November.

On the 25th of November WTI Crude Oil was trading near 77.00, two days later it was challenging the 67.00 ratio. On the 2nd of December the 62.00 mark came within sight for the commodity. A price recovery ensued with choppy conditions prevailing, but on the 16th of December WTI was near 73.00, when a reversal lower abruptly took place again and a low of nearly 66.00 USD per barrel was demonstrated on the 20th. However since that recent low WTI Crude Oil has been a buyers’ market and as of this writing the commodity is approaching 77.00 USD.

Technically WTI has certainly confronted speculators with choppy conditions and risk management has proven an important tool. However, the swift movement in value has also provided traders an opportunity to take advantage of volatility and test their perceptions as global conditions move because of headline ‘noise’ and speculative nervousness.

While Crude Oil certainly saw its value erode in late November due to a new onslaught of fears caused by the Omicron variant, the past couple of weeks have seen an incremental climb. WTI Crude Oil now appears ready to begin January near values which could be ready to test marks last seen before the new coronavirus fears struck the marketplace in late November.

Technical traders may be somewhat skeptical of the move higher seen the past week because they may believe this has something to do with light holiday trading. While it may prove to be an important facet of the actual market regarding volumes, the ability of WTI Crude Oil to fight off of lows seen in early December and go into January almost having recovered it total price seen in late November is intriguing.

If WTI falters below the 73.00 level and begins to challenge prices below 70.00 this may be perceived as a bearish sign in the market. Having touched the 66.00 level in the middle of December, some traders may feel the urge to test downward momentum of WTI Crude Oil believing it can retest those lows. However, traders shorting the commodity should not get too ambitious.

The current direction of WTI may prove to be a solid bullish signal. If lows are tested, they may provide a solid position to ignite buying positions.

If WTI Crude Oil is able to penetrate the 77.00 price level and sustain its momentum, the price of 78.00 should be watched carefully. Technically, there is reason to suspect if late November prices are challenged with upwards price action that the 80.00 juncture could become a speculative playground for WTI like it was able to display in October and November.

While some skeptics may believe WTI Crude Oil has been overbought in the short term, the price is actually still under levels displayed a month and a half ago. If positive market sentiment continues to build into the global economic picture, traders may believe WTI could begin to challenge marks above 80.00 and aim for the 82.00 to 84.00 ratios without too many hurdles. Bullish traders who are optimistic may believe there is another leg higher that can be demonstrated in January for WTI Crude Oil. 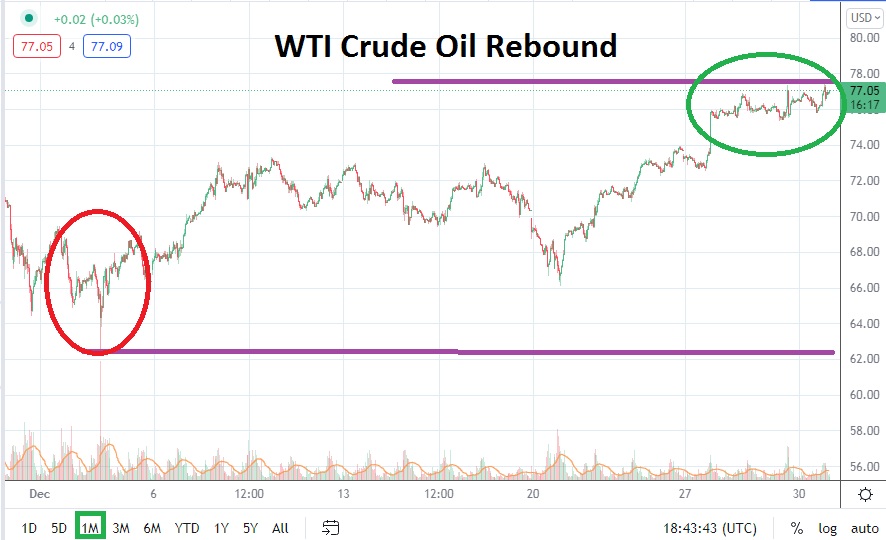 Gold Technical Outlook – Can XAU Get into Gear in 2022?