2022 is a big political year for Latin America. After presidential elections in Chile later this year, we will see further elections in Colombia and Brazil. Right-wing incumbents look vulnerable and local currencies may suffer.

Latin American politics has already seen a decisive shift to the left in 2021 and it is not over yet. Peru elected a left-wing president in June (Peruvian sol down 9% year-to-date) and Chile elected a left-leaning Constitutional Convention in May (Chilean peso down 11% YTD). Polling for Chile’s presidential election later this year looks very tight and next year sees further presidential elections in Colombia (May) and Brazil (October).

The leftward shift in politics, akin to the ‘Pink Tide’ a decade ago, reflects not only Latin America suffering greatly through the pandemic, but the kind of deep-seated resentment of inequality that characterised riots in Chile in 2019.

In this article, we take a look at the currencies of Brazil, Mexico and Chile. Unlike some other commodity producers, Brazil’s real and Colombia’s peso fared poorly in 2021 and are expected to depreciate again in 2022.

For Brazil, we see the policy mix heading in the wrong direction. Heavy spending to fight the pandemic and to support sentiment into an election year sees the Bolsonaro administration threatening to suspend the fiscal ceiling. A fiscal risk premium being built into the currency and aggravating inflation fears has prompted a very aggressive tightening cycle from Brazil’s central bank. The combination of loose fiscal policy and tight monetary policy has typically not been a positive one for the BRL. We see USD/BRL heading towards 6.00 as the left makes a challenge for control into October.

Chile’s peso has suffered, not only at the hands of politics but also from the decision to allow residents to tap their private pension pots – selling $50b worth of assets. Despite likely aggressive hikes from the local central bank, we expect USD/CLP to press 875/900 as copper turns lower. The Mexican peso should outperform, however. A much better sovereign balance sheet and Banxico looking to insert a 5%+ wedge over US rates ahead of the Federal Reserve’s tightening cycle should keep MXN more insulated.

The election cycle can un-nerve the BRL 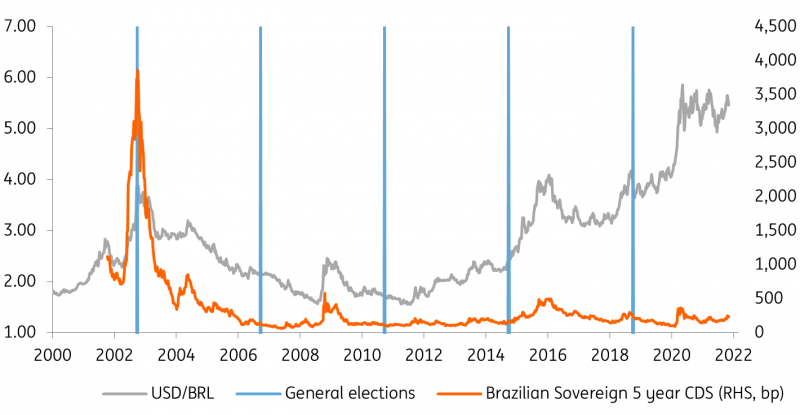 Fiscal monetary mix heads south: Having been on a positive trajectory since 2016 and into the pandemic, it looks as though Brazil’s post-pandemic policy mix could be heading in the wrong direction. This can be categorised as a pre-election government looking to find loopholes in the constitutional spending cap and deteriorating fiscal risk premia forcing the central bank into even more aggressive rate hikes. The policy rate is already 7.75% and the market prices a cycle up to the 12% area into spring 2022, as the central bank responds to 10%+ headline inflation and a soft BRL.

Politics: Brazil holds presidential elections on 2 October 2022 with a run-off on 30 October, if necessary. Candidates have yet to declare, yet it seems that President Bolsonaro could be facing a challenge from former President Lula. Latest opinion polls favour Lula in a run-off. While there’s no guarantee the past will repeat itself, the previous Lula administration, especially in the Rousseff years (impeached 2016) was synonymous with unfunded government spending and Brazil’s loss of investment grade status. Brazil’s fiscal credibility looks as though it will come under pressure through 2022.

It’s not all gloom and doom: Given a strong dollar environment and elections in 2022, we favour USD/BRL trading towards the 6.00 area through the year. Yet the local central bank is relatively interventionist and has a large stock of FX reserves and swaps with which to resist BRL depreciation. At the same time, Brazil’s external position should remain more manageable versus prior years, with a current account close to balance. Here, our team expects soybeans, Brazil’s main export, to average above $1300/bu next year – maintaining the trade surplus. In September, the IMF estimated that the BRL was 5% undervalued, but a bullish correction in the BRL requires many things to go right next year.

Mexico’s better balance sheet: In contrast to heavy government spending in Brazil, and Chile cracking open private sector pension pots, Mexican President Lopez Obrador (AMLO) adopted a much more frugal approach to the pandemic. In 2020, Mexico spent just 0.7% of GDP on direct budgetary support measures compared to a 4% average for emerging markets. Having contracted 8% in 2020, growth in 2021 is expected at 6.2% and then 4% in 2022. Smaller budget deficits and lower levels of public debt (gross debt under 60% of GDP) leave Mexico in a much better place than some heading into a more difficult external environment in 2022.

Help from the North: Mexican activity should continue to be supported by strong US growth (near 5% in 2022). A point we have been making all year is that remittance flows down into Mexico have been very supportive for the peso. These are currently running at close to US$50b per year and are expected to remain near that level in 2022. These flows help to keep the current account in balance (offsetting net negative FDI). One point of attention is the auto sector. The semiconductor crisis is estimated to have knocked 1% off GDP in 2021 and delays in resolving this crisis could weigh.

Credible monetary policy: Banxico is one of the most respected central banks in the region and has already taken the policy rate to 5% this year. Inflation is expected to peak in the 6.00/6.50% area early next year and Banxico may well take rates to around that level too in the first half of 2022. That significant wedge over Fed policy should provide a cushion for the peso through 2022 – as it did between 2017-2019 – and help keep USD/MXN in a 20-21 range. Indeed, on some measures the peso is considered substantially undervalued and foreign holdings of Mexican government debt (MBONOs) remain relatively low.

Politics: Ever since the social unrest of 2019, politics has played a significant role in the pricing of the peso. Front and centre now is the first round of the presidential election to be held on 21 November. Most recent opinion polls point to the left-wing threat of Gabriel Boric fading and conservative candidate Jose Kast likely to win in a run-off on 19 December. That could provide a little more stability to the peso, as could any sign that Congress is blocking any further release of private pensions. So far, around $50b of assets (largely local assets) have been sold during the pandemic.

Intervention Programme and Tightening: In October, the Central Bank Of Chile (CBC) suspended its $12b buying programme. This original intention…

Online trading – how does it compare to traditional brokerages?