The GBP/USD rose sharply with the rise of risk appetite in global markets. This contributed to the pair reaaching the resistance level of 1.3461 before settling around the level of 1.3425 at the time of writing. It must be taken into consideration that holiday market conditions and technical resistance could keep the GBP below 1.3461 before the new year. Sterling was the top performing major currency over the past week through Tuesday after booming global markets and a favorable market reassessment of interest rate expectations at the Bank of England (BoE) helped extend December’s recovery against most of its peers.

The pound’s gains increased last week in response to studies indicating that the Omicron variant could pose less of a threat to public health than its predecessors, which means that it may be less headwind to economies than the previously prevailing variables. These positive study results have prompted investors to revive their hopes that the Bank of England interest rate will rise to 1% or more in 2022, helping the GBP/USD recovery that was also largely driven by the US dollar’s decline ahead of the holidays.

Dollar exchange rates appear to have taken a rest from what is now a six-month high despite the US Federal Reserve strongly signaling in December that it may raise US interest rates as soon as March next year, providing additional tailwinds to sterling. Commenting on the performance, Paul Siana, chief analyst at BofA Global Research, said in a recent note, “We see a tactical range for GBP/USD to move higher at the end of the year like the 50d simple moving average now at 1.3491 and possibly the channel top at 1.36 (which is the peak of the channel during the first week of 2022).”

There are no global central bank policy events or major economic numbers scheduled this week, leaving only the normally low volumes of holiday market trading conditions to drive price action in the British pound and other currencies. However, once into the new year, market interest is likely to return to the size of the burden placed on the economy by the Omicron strain of coronavirus and the government’s response to it, as well as any spillover effect on market expectations of interest rates in the BoE.

Jordan Rochester, an analyst at Nomura, says: “I am shorting the GBP/USD so naturally this move is worrisome, but I think it is more of a random rally in the Christmas market rather than the start of a trend. New bullishness with the positive impulse from the Bank of England rate hikes which are already largely priced in.” Rochester warned: “The BOE is already fully priced for February and 100bp+ for November next year – so I see more room for a US rate hike after the BoE (the Fed meeting in March could end up for another 10bps for example).”

On the daily chart, the GBP/USD currency pair started forming an ascending channel and the technical indicators headed to the upside, but this situation does not need more momentum to complete the rebound path upwards. The bulls may remain in control of the performance if it moves towards the resistance levels 1.3515 and 1.3660. On the other hand, and over the same time period, the currency pair may return to the general bearish trend if it moves towards the support level at 1.3290 again. I still prefer selling the currency pair from every bullish level. 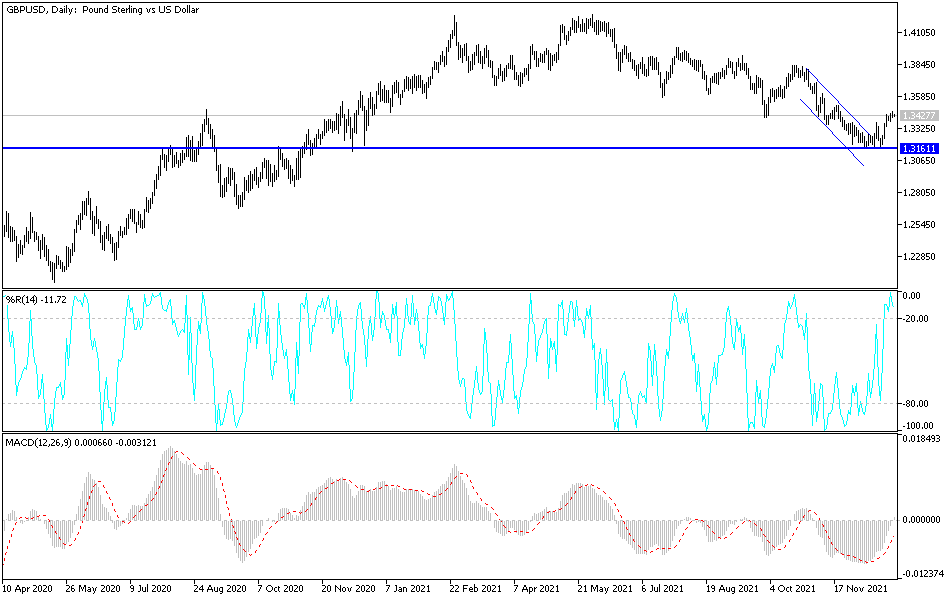