Healthy risk appetite and abandonment of the US dollar as a safe haven helped the GBP/USD settle upwards around the resistance level 1.3445 at the time of writing. The Forex market is expected limited movements due to the holidays, with poor liquidity and the absence of important economic releases.

Yesterday, the UK has reported less than 100,000 cases of the new coronavirus, the first time it has been below this limit in nearly a week. About 98,515 new cases were recorded, down from a Christmas Eve peak above 122,000. The UK government’s virus dashboard said the numbers were affected by the Christmas holidays, with data for Scotland, Northern Ireland and Wales incomplete.

New infections, led by the highly transmissible omicron variant, have risen by more than a quarter of a million in the past week. Despite the increase in cases and concerns about pressure on the health services, media reports indicate that British Prime Minister Boris Johnson will not impose new restrictions to curb the spread of the disease. Johnson is under pressure from members of his own party to avoid imposing new restrictions on the public.

The recent gains for the GBP/USD pair gave weight to the views of technical analysts at Credit Suisse and BofA Global Research who were recently suggesting that the pound’s six-month depreciation against the dollar may also be nearing an at least temporary end. Credit Suisse is looking for a trading range to develop as sterling price consolidates between recent lows and estimated highs around 1.3371 over the coming weeks, although the technical team at BofA Global Research sees room for a sterling bounce to extend towards 1.36 resistance.

According to Bank of America, “Over the past month, we viewed the GBP/USD pair as a contrarian buying idea at around 1.32 while above the 1.3150 support level (reference reports: Dec 13, Dec 6, Nov 23). Market reactions in response to the deluge of central bank meetings and recent critical data releases confirm this view.”

The recent gains of the GBP/USD currency pair moved the direction of the technical indicators to the upside. The daily chart below shows that the descending channel has been broken and the reversal has started, and the bulls should move towards the resistance levels 1.3540 and 1.3660 to confirm the trend. On the other hand, the currency pair may return to the bearish path again in case it moves back towards the 1.3180 support level.

Today is a British holiday. On the American side, the house price index and the Richmond industrial index will be announced.

This is in addition to interaction with announcements about the path of the outbreak of the new variant and restrictions for containment. 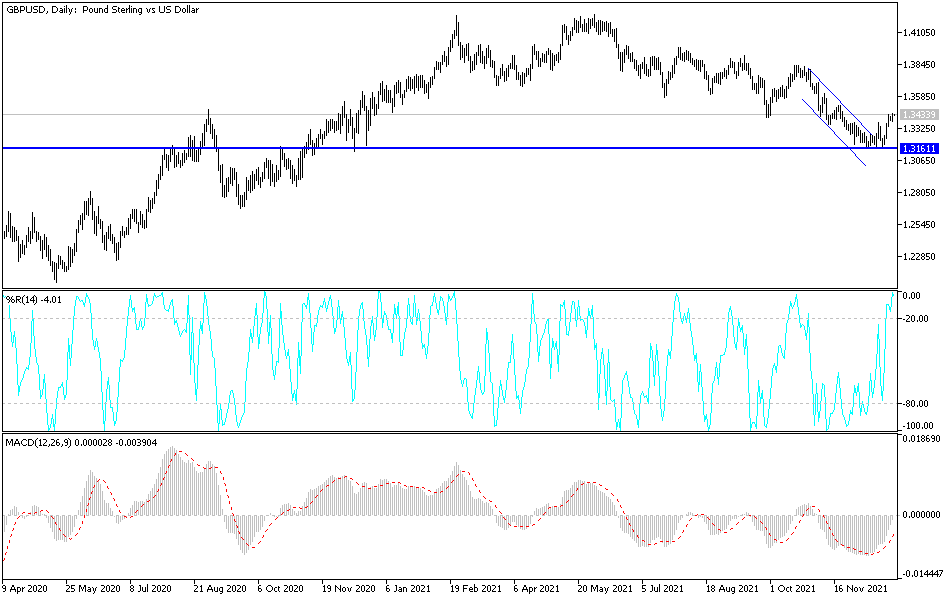 Will the Bank of Canada raise rates to combat soaring house prices?