Get the Forex Forecast using fundamentals, sentiment, and technical positions analyses for major pairs for the week of December 27, 2021 here.

There are some valid long-term trends in the market, so it can be a profitable time to trade right now.

Last week’s Forex market saw quite a lot of price movement, although it was the lead-up week to the Christmas Holiday and there was very little high-impact data released. The only releases were Canadian GDP and the Reserve Bank of Australia’s meeting minutes, neither of which contained any surprises or moved the market significantly.

Risk sentiment improved over the week, with most stock markets higher, including the benchmark US S&P 500 Index. Most global stock markets rose over the week, as did the Australian, New Zealand and Canadian Dollars which are commodity currencies and key risk barometers. The improvement of risk sentiment globally is probably mostly because there is increasing optimism over the impact of the omicron coronavirus variant which has begun to spread extremely rapidly in some European nations and is just getting started in the USA. Safe-haven currencies such as the Japanese Yen, the Swiss Franc, and the US Dollar are all lower.

I wrote in my previous piece last week that the best trade for the week was likely to be short of the EUR/USD currency pair. Unfortunately, the EUR/USD Index rose by 0.68% over the course of the week.

The coming week is likely to see a lower level of volatility due to the extremely slow economic calendar and continuation of the Christmas & New Year holiday season, with market direction likely to be determined by the impact of the omicron variant.

Last week saw the global number of confirmed new coronavirus cases rise to its highest level ever seen. Approximately 57.4% of the global population has now received at least one vaccination. Pharmaceutical industry analysts are reconsidering the earlier belief than the pandemic would effectively end in 2022, with many seeing it likely to continue until 2024 or 2025.

The weekly price chart below shows the U.S. Dollar Index printed a bearish engulfing candlestick last week, after again rejecting the resistance level identified at 12257 over the previous week. Note how this key resistance level has held again – in fact it held just after the FOMC release the week before last when it was tested, which is possibly a bearish sign. While this continued failure at resistance is not enough to invalidate the long-term trend (the price is well above its levels from 3 and 6 months ago), it is very notable that there is clearly strong resistance here, which is having impact. This suggests that despite the long-term bullish trend, we may now be experiencing a bearish pullback or even a reversal. I would not look towards the USD as a key driver for any trades over the coming week. For a while, and possible for the entire coming week, there will likely be momentum against the US Dollar, although the Japanese Yen is considerably weaker. 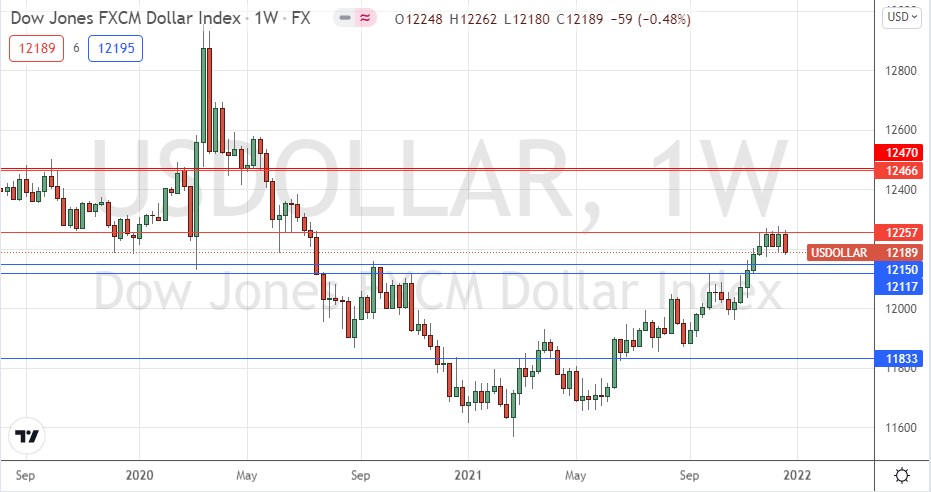 The USD/JPY currency pair made its highest weekly close in 5 years, printing a healthy sized bullish candlestick which closed very near the top of its range. These are clearly bullish signs that we are likely to see a further rise over the coming days and weeks. However, it should be noted that there were recently several higher daily closes all the way up to the very key resistance level at 115.25. Although the rise in USD/JPY is supported by the improved risk sentiment we are seeing in markets since data began to show omicron as relatively mild, this currency pair is still prone to a sudden selloff below 115.25, so I do not want to go long here until we see a daily (New York) close above 115.25. 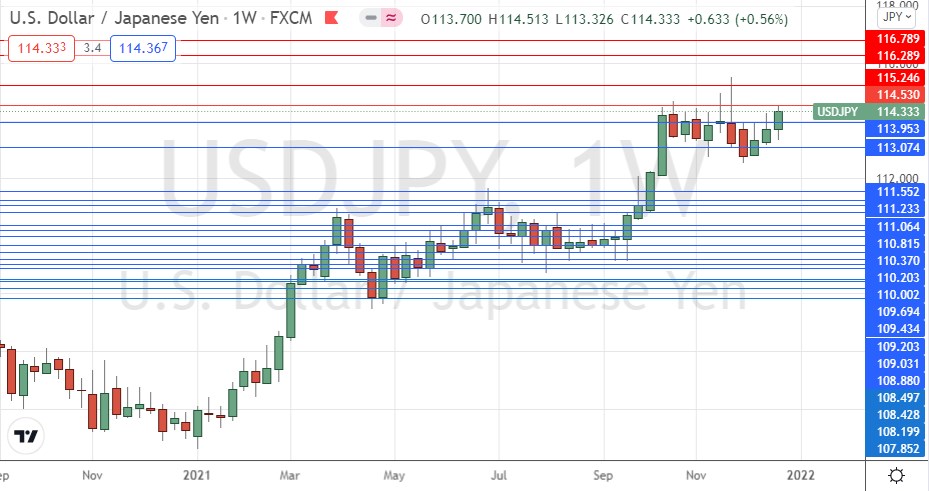 The S&P 500 stock market index made its highest ever weekly close, printing a healthy sized bullish candlestick which closed very near the top of its range. These are clearly bullish signs that we are likely to see a further rise over the coming days and weeks. The S&P 500 Index is a buy.

Corn, represented by the Teucrium Corn Fund ETF, made its highest weekly close in more than 6 months. It printed a healthily sized bullish candlestick which closed right at the top of its price range. We also see a very long-term bullish trend which has been in existence since the coronavirus crash of April 2020. These are bullish signs. Markets are currently enjoying risk-on sentiment and with demand healthy and supply chain difficulties still in existence, we have an environment which could see firm ongoing price rises in major commodities such as corn. Be careful trend trading commodities with retail Forex/CFD brokers as overnight swap rates can be high, making long-term trading potentially uneconomical. 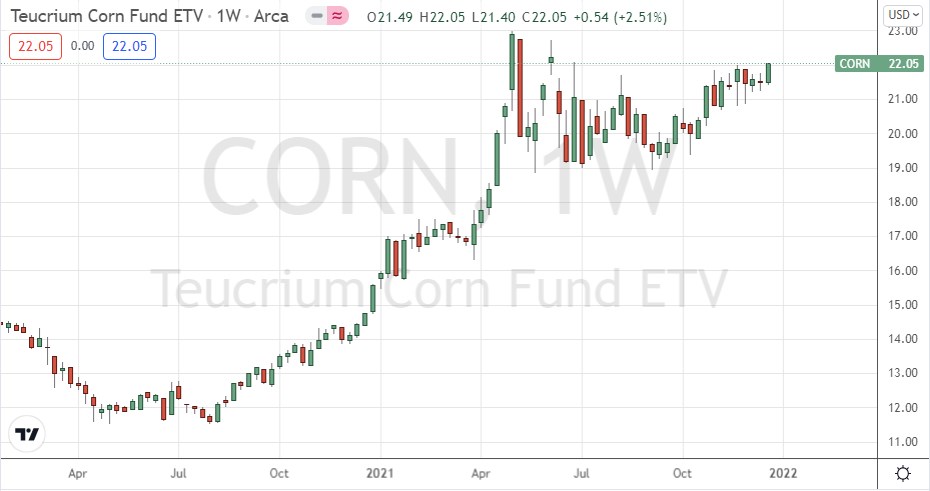 I see the best opportunity in the financial markets this…