The EUR/USD is back above the 1.13 level again in light of the rising global market wave before the holidays after studies indicated that Omicron is mild. The euro was supported by the impact of European natural gas prices. The EUR/USD price is stable around the 1.1325 level at the time of writing. The currency pair’s rebound came on the back of the weak US dollar and a double batch of positive developments elsewhere. Cautious optimism that Omicron is less aggressive than the Delta variant supports risk assets. In this regard, Elias Haddad, an expert at the Australian Commonwealth Bank, says that three preliminary studies show that the risks of hospitalization with the Omicron variant are much lower than the Delta variant.

Most notably for the EUR/USD, a series of studies emerged on Thursday, this time from researchers in Britain, which appear to confirm previous observations by South African scientists that the strain of the Omicron virus can be mild. Studies in England, Scotland and South Africa have found that the risk of hospitalization is between 15% to 80% lower with the omicron variant than with the delta variant, according to a summary of the research in the British Medical Journal.

This was a favorable sign for all countries and economies currently under the brunt of restrictions on social contact and business activities, some in Europe, although lower natural gas prices were also cited by analysts as helping the EUR/USD recently.

Sean Osborne, Senior FX Analyst at Scotiabank, says: “The euro should trade in line with its peers for the rest of the year while monetary policy divergence remains the primary driver of weakness against the US dollar in the medium term. Dutch natural gas prices have fallen by 20% and are devaluing the euro, but a number of US LNG ships appear to be heading towards Europe to supplement lower gas shipments from Russia.”

Some reports indicated that as many as 30 tankers were on their way to Europe from the United States carrying LNG after continental prices exceeded those seen around other parts of the world, reducing prices on the continent in the process. And while all countries have seen sharp increases in energy costs this year, with US oil prices up more than 50% and some natural gas prices for future delivery up nearly 500% in 2021, Europe and the UK are widely seen. However, they are at particular risk of price increases.

However, it is not yet known whether shipments of natural gas from the United States will continue or whether their mitigating effect on prices will continue.

Attempts to rebound upwards for the EUR/USD currency pair are still weak, and stability around the 1.1300 support level supports a bearish performance and a move to the support levels at 1.1260, 1.1180 and 1.1090, with the second and third levels likely to move the indicators to oversold levels. On the upside, and according to the performance on the daily chart, the resistance levels at 1.1390, 1.1455 and 1.1520 are important to cause a change in the general bearish trend.

The currency pair is not awaiting any important economic data today, whether from the Eurozone or from the United States, amid holidays in some global financial markets, which affect liquidity in the market and the desire of investors to trade. 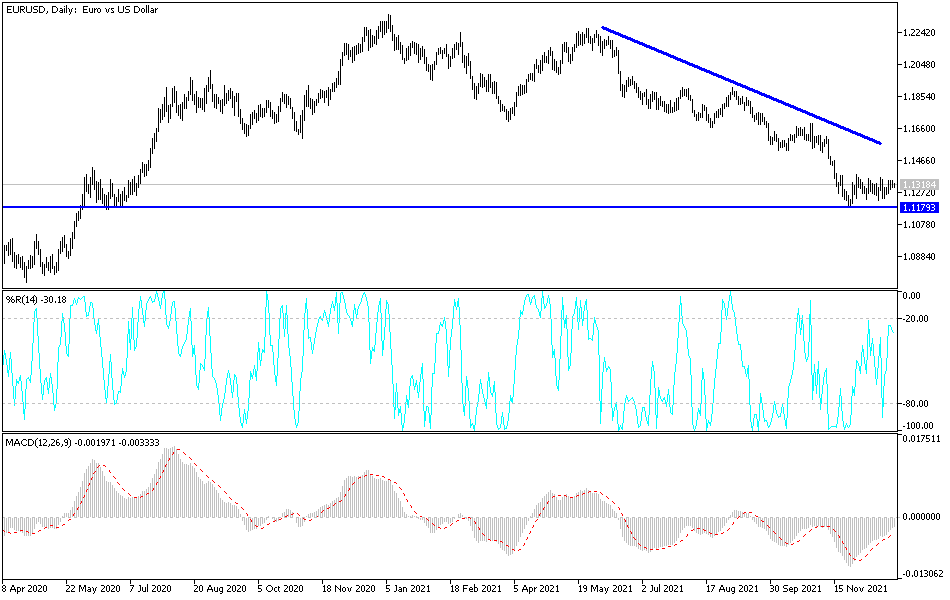 The Forex NewsPaper May 24, 2022 0
What you need to take care of on Wednesday, May 25: The American dollar remained weak on…