The GBP/USD attempted to recover from 2021 lows in the last week of trading before the holidays, hitting major technical milestones along the way in what may be a temporary effort by the pound to draw a line under a six-month vortex of losses. At the beginning of last week’s trading, the currency pair fell to the 1.3173 support level before recovering in the rest of the week’s trading to the 1.3438 resistance level and settling around the 1.3405 level at the time of writing. The recovery of the currency pair came in conjunction with the weakness of the US dollar and the pace of risk appetite on the part of investors amid optimistic reports about the strength of the Omicron variant.

The recent bounce for the GBP/USD pair came to the cusp of its gains when the Bank of England surprised the market with its decision to raise the bank interest rate again to 0.25% recently. In this regard, Elias Haddad, senior forex analyst at the Commonwealth Bank of Australia says: “GBP/USD built good support near 1.3200, after failing to sustain breakouts below this level over the past few weeks. The bottom line: the BoE policy normalization process is sound and the pound could go higher, especially against pessimistic central bank currencies, such as the European Central Bank.”

Sterling’s gains were not halted by recent data indicating that UK economic growth for the third quarter was slower than previously thought with the Office for National Statistics estimating a 1.1% increase in GDP, down from the 1.3% initially estimated. In this regard, analysts point out that the Omicron variant is likely to lead to a decline in UK GDP in December and in the first quarter of 2022. But as the Bank of England points out, experience since March 2020 indicates that successive waves of Covid appear to have had less of an impact on GDP.

Also, the sterling price has not fallen due to the recent Fed policy decision and accompanying expectations, which hastened the termination of the bank’s quantitative easing program so that it expires in March 2022 instead of June and suggests that interest rates may rise sooner than previously thought. This was expressed by US Federal Reserve Chairman Jerome Powell, responding to a question from CNBC’s Steve Laisman at the Fed’s press conference.

The Fed’s new forecasts showed that a majority of FOMC members think they are likely to vote for three Fed funds rate increases next year, although many analysts have predicted exactly that kind of hawkish shift in the outlook before the December meeting. Meanwhile, the GBP/USD has been rapidly rising after that, providing an early indication that the dollar’s six-month advance may be nearing its end and opening the door for sterling to reach major technical milestones this week.

On the daily chart below, there is a clear breakout of the GBP/USD bearish channe. To form an opposite channel and a change in the general trend, the currency pair should move towards the resistance levels 1.3520 and 1.3660. On the other hand, the bears may have hope if they return to the vicinity of the 1.3170 support level again. I still prefer selling the currency pair from every bullish level.

The currency pair is not awaiting any important economic data today, amid holidays in some global financial markets, which affects the liquidity in the market and the desire of investors to trade. 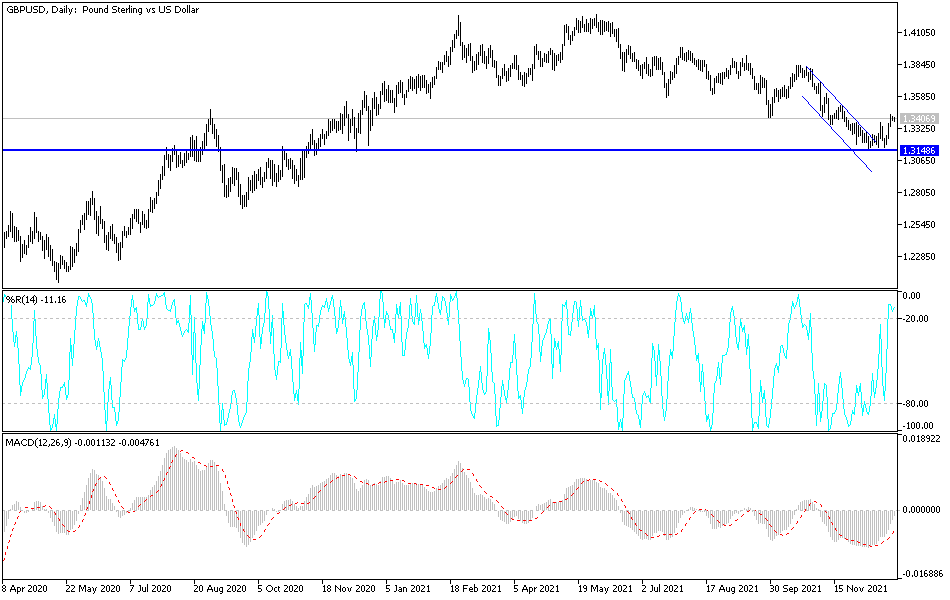