1. Q4 Recap and Overview of Key Drivers for Q1

The global stock markets traded mixed in Q4 2021, with the major indices in US and Europe managing to claw back some of their losses suffered in the third quarter. The fourth quarter itself was quite volatile. October was generally a positive month, while November and start of December saw investors abandon risk as concerns over the economic impact of omicron variant of Covid, surging inflationary pressures and monetary tightening from major central banks all weighed on sentiment. But as we went to press in the final week of the month before Christmas, the markets managed to claw back their losses suffered earlier in the month. Investors were relieved by scientific evidence that although more infectious, there were not as many severe illnesses caused by Omicron as the Delta variant. This left the major indices on track to end the year with solid gains: 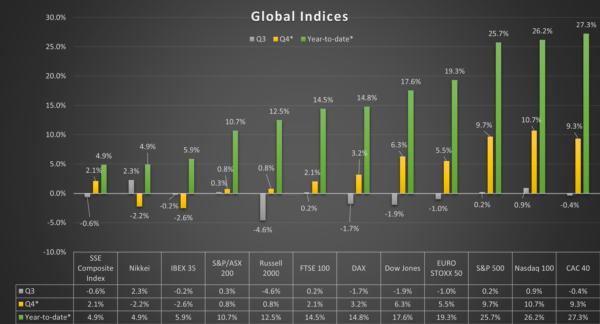 Source: ThinkMarkets; *prices and index levels correct as of 23 December 2021

The FX markets were fairly contained in Q4, with the US dollar remaining bid against all the major currencies owing to a more hawkish central bank. The Fed announced in December that – because of NOT transitory inflation – it was speeding up tapering of its QE purchases and end the programme by March 2022, while the median FOMC projections pointed to three rate increases in the year ahead. This was in sharp contrast to the European Central Bank and Bank of Japan’s monetary policy updates, keeping their respective currencies under pressure. The ECB did however turn a bit hawkish as inflation surged higher in Eurozone too, driven by an energy crunch. Rising prices of oil and gas weighed on currencies of oil consumer nations like Japan, while supporting producer nations’ currencies such as the Canadian dollar. The Bank of England finally raised interest rates by 25 basis points, providing only moderate support to the pound, with sterling being held back by concerns that the economy would weaken as Omicron variant triggered a fresh wave of restrictions in the country. At the time of writing, in the last week before Christmas, the dollar remained head and shoulders above the rest: 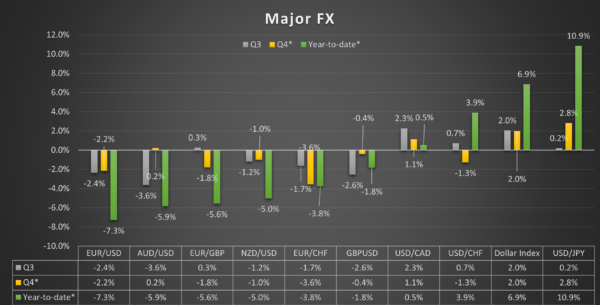 The greenback rose more profoundly against emerging market currencies, most notably the lira. The beleaguered Turkish currency slumped to repeated record lows, as despite high levels of inflation the country’s President Recep Tayyip Erdoğan ordered the CBRT to keep cutting interest rates. Some of the other EM currencies fared slightly better, with the Chinese yuan completely bucking the trend. Overall, though, it hasn’t been a good quarter or indeed a year for EM currencies as a whole: 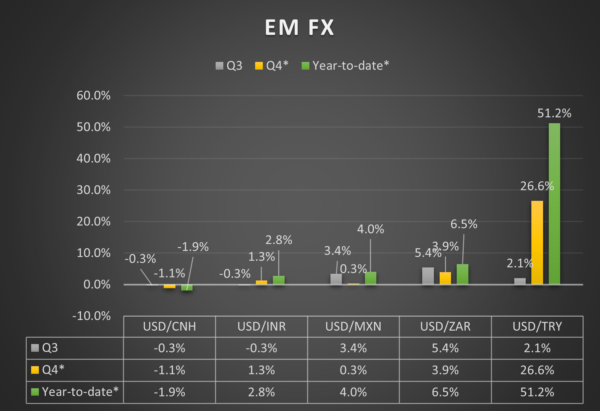 The key drivers behind the currency and equity markets have been inflation, due in part to surging commodity prices and supply chain issues. In the fourth quarter, however, energy prices came back down, and this helped to reduce the overall yearly gains. Precious metal prices have been under pressure all year long due to elevated bond yields and a stronger US dollar, with investors not too keen to buy gold as a hedge against soaring inflation. 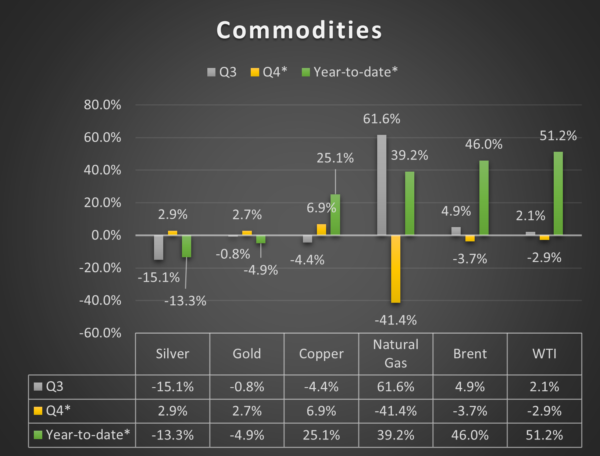 Apart from the fact that both the US dollar and global bond yields both rose, the only other reason why gold was disliked was probably due to this: 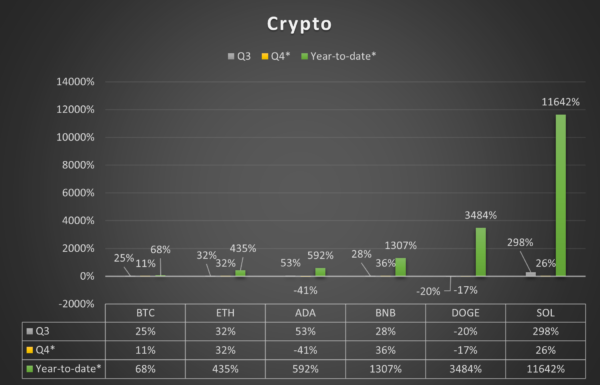 Bitcoin and Etheruem added more to their 2021 gains in Q4, while some cryptos consolidated their gains. Investor appetite remained insatiable for most of the year, although November and December weren’t great months for crypto as risk assets suffered across the board.

Heading into the first quarter of 2022, concerns over the economic impact of the coronavirus and high levels of inflation will continue to dictate market and policy direction alike. Investors will want to know what steps governments and central banks might take to stem price pressures, and at the same time, keep their respective economies ticking over as the latest covid-linked restrictions weigh on activity. With governments around the world sharply increasing fiscal spending during the pandemic, introducing further stimulus measures without raising taxes will be politically very difficult. Likewise, central banks have pushed themselves into a corner. Surely, they will be less keen to ramp up bond purchases again, with inflation being so high. If anything, the Fed may not even wait until the middle of next year to raise interest rates and could also wrap up bond purchases sooner, if inflation heats up even more in the next couple of months. What the Fed decides will also have big ramifications for the dollar and commodities like gold and silver. Will gold finally respond to inflation, or will the dollar again prove too hot for the precious metal? Elsewhere in commodities, the OPEC+ has a tough decision to make. While oil prices have fallen back a tad, they still remain quite high. The group is set to boost its oil output by another 400K barrels per day in January, but the latest covid-linked travel restrictions could mean a pause in future output hikes. And what about crypto – more of the same or a year of consolidation?

The outlook for the first quarter of 2022, is primarily contingent on the actions of the US Federal Reserve, as well as Covid.

How Far Can the Fed Tighten Before Breaking Something?

With the USD rally lasting through 2021, the positive news for the greenback appears to have reached a plateau, with more hawkish talk from Fed officials not translating into an even higher exchange rate. Our team considers the best days for the US currency during this cycle to be behind us, though assuming strong macroeconomic data in Q1, we might see another stab higher in the USD index, currently trading around 96.00. The level has proven to be crucial over the past 3 years, and the market is taking a breath of fresh air before attempting a more decisive move above (or below) this strong resistance area. 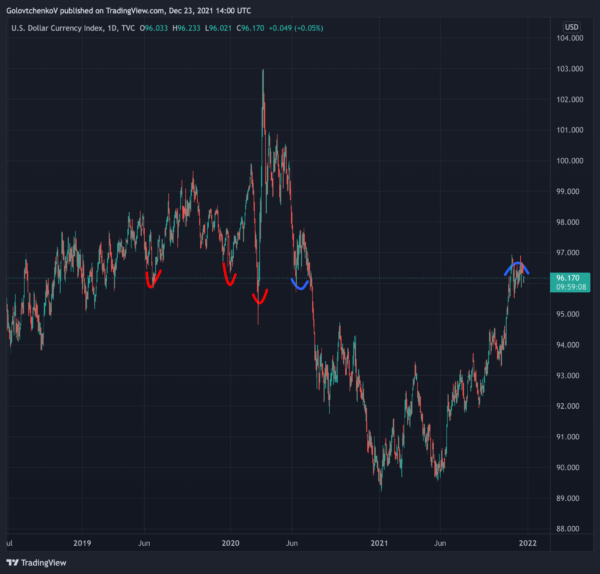 The first major central bank to hike rates was in fact the Bank of England and while it took a couple of days, the GBP rallied across the board, torpedoing the rest of the FX market into a defensive stance. The continuously evolving coronavirus is still the main concern for the UK economy, though fiscal measures targeting businesses affected most by the latest pandemic developments, were unveiled by Chancellor the Exchequer, Rishi Sunak, last week. The announcement coincided with the lows for the GBP, which gave back all of its rate hike-related gains in the two subsequent sessions.

Markets unsettled after the US data today | Forexlive