Outlook: Bloomberg reports “Global stocks are bouncing back from the recent selloff this morning as investors take some heart from signs Biden’s agenda may not be dead yet.” Oh, dear. Attributing a market move to a single event is hardly ever right, however convenient. We might as well say the equity recovery is due to the phase of the cycle, or profit-taking ending, or any other excuse. Historically, US political events hardly ever drive global equity markets. If risk aversion was driving equities down, do we now have risk appetite?

Actually, the one market event most noticeable and possibly getting credit for change of heart is commodity prices. The chart we showed yesterday went on to deliver even better results today.

We guess fear of Omicron is driving sentiment on a bigger scale, if not to the utter panic of last March. It’s no help that New Yorkers, Californians and Texans are standing line for hours for tests and other scary stories. We are getting a constant stream of info nuggets but not yet a full picture. We always knew it would be several more weeks before we know the extent of Wave 4 and the details about the latest variant, but people are reacting as though they already know all the relevant the facts instead of scraps and opinions. Given the markets getting thinner by the day, we must expect higher volatility and much of it irrational.

Re our musing yesterday about commodities possibly falling in price, see the chart from Fitch. We are not alone. If so, the Fed can drag its heels. Also, another dandy chart from The Daily Shot—wage growth in the US has not kept up with inflation. Duh. Everyone knows that, or should. So what? Well, apart from any humanitarian instincts, it can mean unions will be having better luck and given the hot press about inflation, many will be demanding higher pay, with or without unions. The latest poll shows unions are more popular among the public than any time since 1965. Remember it was Reagan who put the nail in the coffin with the air traffic controllers’ strike. (We were stuck at LaGuardia and got the last plane out, hideously late but out.). 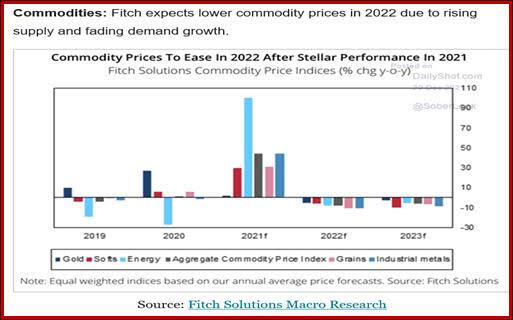 According to the Gallup poll from September, getting dusted off again,  68% approve of labor unions, broken down by party to  90% of Democrats and 47% of Republicans. Considering the big “populist” cohort of the Republicans are the same workers getting lousy pay and without unions, this is counter-intuitive. The Europeans think we are nuts. But the Europeans never had the self-defeating corruption of the UAW (ref the disappeared Mr. Hoffa). Labor union membership is only 9% of U.S. adults (not the same thing as 9% of workers). 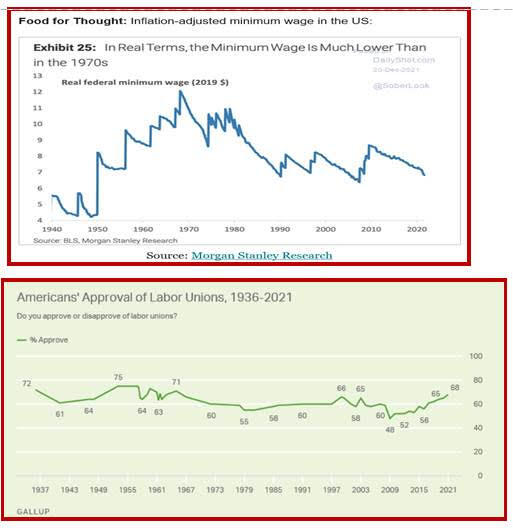 On a more somber note, Wolf Richter has a blazing critique of the Fed and how the press reports the Fed. He says the press reports the bond market doesn’t believe the Fed will really raise rates as much as suggested last week, and could even cut rates. But the Fed knows what it’s doing. It had repressed yields with massive purchases of mostly longer-term paper, plus the MBS. This “purposefully falsifies the bond markets inflation signals.” Now add the Fed’s holding of about 20% of TIPS. “With these TIPS purchases and holdings, the Fed has not only repressed the TIPS yield, but also has ingeniously manipulated the bond market’s ‘inflation expectations’ data, that are based on the difference in yields from Treasury notes and TIPS with similar maturity dates.”

Bottom line: “… the often cited inflation expectation data coming out of the bond market, such as the “10-Year Breakeven Inflation Rate” (now at 2.38%), is not an indication of actual inflation expectations by the bond market, but what the Fed wants it to be.” Unintended side effect or deliberate scam? Richter sides with scam. We don’t (remember the Fed tried to escape with a mistaken hike in Dec 2018), but he’s not wrong about our having no idea of what yields should be because we’ve had QE for so long. Too long.

He also charges that the Fed had to know inflation was going to skyrocket “as a result of its reckless money-printing. And to be able to brush off this coming inflation for as long as possible without looking too ridiculous – an effort that failed as the Fed ended up looking totally ridiculous by summer – it preemptively manipulated the inflation signals coming out of the bond market with its proportionately large purchases of TIPS. It thereby purposefully falsified the very inflation signals that the Fed cited endlessly in its efforts to brush off the surging inflation.”

In other words, we shouldn’t trust yields or breakevens because they are being manipulated by the Fed.

“The bond market will buy the Fed’s hawkishness just fine if the Fed allows it to.” He would end QE now and forever. “If there is too much demand for yields to rise beyond a certain point, particularly demand from foreign buyers whose own sovereign bonds might still yield near 0%, the Fed should increase amounts of outright sales until the 10-year yield rises well above the rate of inflation. Blistering foreign demand would provide a perfect opportunity to unload the balance sheet for a perfectly timed exit.

“And after the Fed starts actually shedding two or three trillions of its holdings in this manner, the bond market will start joyfully buying the Fed’s hawkishness, and yields will jump to where they belong with CPI inflation at 6.8%. And as long-term yields shoot higher, the yield curve steepens, and the Fed can then raise its short-term rates rapidly to keep spreads at a reasonable level, while keeping the yield curve steep enough. And it will then gradually begin to accomplish the other task at hand: tamping down on this runaway inflation.”

Whew. We don’t buy all of it but Richter is making a valid point—anytime government interferes in a market, it results in a misallocation of resources. We wouldn’t call the Fed “reckless” but have said all along that QE doesn’t really make sense, at least not to a sane economist. Bernanke accepted it because he thought, good Boy Scout that he is, he was saving the economy from a 1930’s style Depression.

Even though the Fed is hardly going to take this advice and dump all QE in one fell swoop, Richter is right that ending QE will give us increasingly useful rate and yield information, and end, perhaps, the utter confusion we all suffer trying to tie yields to anything in the real economy. We sometimes reach out to our bond buddies to explain something and can never get a fully convincing answer—in fact, “don’t know” is the usual response to why things do not make sense. News outlets are no better. Bloomberg at least reports on bonds, even if it’s wrong and stretches some points beyond credulity, but the WSJ and others gave up years ago. Go to the “Bonds” section and you get some silly story about something irrelevant and two weeks old.

Read More : Commodity prices is the most noticeable market event and possibly getting credit for