The risk-sensitive New Zealand Dollar is falling against the US Dollar in early Asia-Pacific trading. Westpac’s consumer confidence for the island nation in the fourth quarter fell from 102.7 to 99.1, which was also below the forecasted 101.5 figure, according to a Bloomberg survey. NZD/USD fell almost a full percentage point last week.

Trade data for November also crossed the wires this morning. The balance of trade for November saw a deficit of N$864 million. However, that wasn’t as large as October’s deficit of N$-1.2 billion. November’s deficit was driven by exports of N$5.86 billion and imports of N$6.73 billion. While the smaller deficit is a positive sign for the Kiwi economy, it will likely have little effect on the currency’s exchange rate going into year’s end, with traders more focused on broader risk trends focused around the spread of Omicron.

The Christmas holiday later this week will see a shortened trading week in many markets from the United States to Australia, which opens the door for reduced liquidity conditions. That could spark an increase in volatility. Markets are already in a cautious stance due to the Omicron variant threat. So far, it appears that vaccines will offer protection against deaths and hospitalizations but hardly against the risk of breakthrough cases. Given the variant’s high rate of transmissibility, health systems around the world may come under severe stress.

Today, China will update its loan prime rates (LPRs), which represent the benchmark for new lending in the country. Analysts expect the People’s Bank of China (PBOC) to leave the 1- and 5-year LPRs at 3.85% and 4.65%, respectively. However, these lending rates will likely be cut sometime early next year as Beijing prepares to stimulate growth following the country’s property market woes. A surprise cut today would, however, send a stronger message to markets.

NZD/USD is trading near December lows after bearish Engulfing candlestick sent prices lower last week. That followed prices breaking above channel resistance earlier this month. The December low at 0.6699 is in danger if current support breaks, which could open the door for prices to drop back to channel resistance turned support. A rebound would have bulls attempting to pierce above the falling 20-day Simple Moving Average (SMA) before testing the December high. 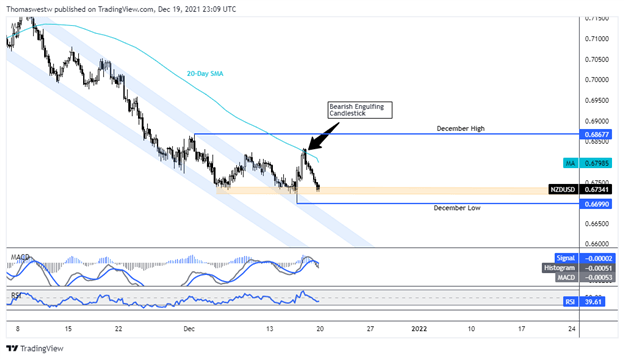