Ongoing cryptocurrency weaknesses had broad impacts on the industry, and Avalanche’s token AVAX/USD was not spared either. The token plunged from it’s all-time high of above $145 on November 21 to a low of $76 on December 13. However, AVAX/USD is demonstrating bullish signs again, even as some other tokens start a sluggish recovery while others remain subdued in the dented crypto weakness. At the time of writing, AVAX/USD was trading at $102.56 and showing potential upsides.

AVAX/USD surge started on December 14 and became stronger the following day. The rise was boosted by news that Circle’s USDC had gone live on the Avalanche protocol. Accordingly, the deployment of the stablecoin would allow developers and community members to accelerate decentralized finance (DeFi) adoption. Well, Avalanche already prides itself on being an open, programmable smart contract protocol for DeFi, and the addition of USDC paves the way for the enhancement of payment options that increases the popularity of the platform that also serves as a marketplace for non-fungible tokens (NFTs) and enterprise application solutions.

Besides, late comments by the Federal Reserve Chair Jerome Powell are also boosting the cryptocurrency industry, and AVAX/USD is benefiting from the improved sentiment. Powell’s response that he is not concerned about crypto disrupting the US financial stability boosted various tokens. Markets were also warned up by an announcement that Fed will look to increase bond tapering and initiate three rate cuts next year to tame inflation. As a result, Solana surged more than 10% to be one of the top gainers in the last twenty-four hours. Bitcoin also gained, while Ethereum reclaimed the level above $4,000.

Avalanche fans are, of course thrilled by the developments, as buying of the token has accelerated since the USDC launch, pushing the token from a low of $79 on December 14 to a high of $107 on December 16. Besides the positive fundamental developments, the technical pointers favor a high price for AVAX/USD. 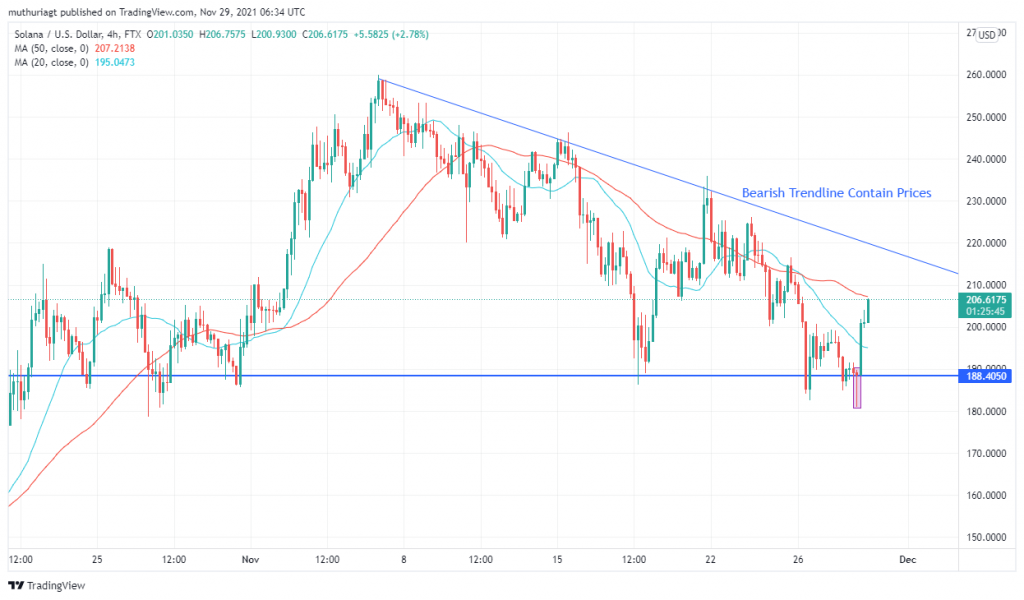 From a technical point of view, AVAX/USD is bullish after breaking above the descending triangle that formed via support at $81.8. The breakout on December 14 ushered in strong bullish momentum, and AVAX/USD is now trading above the bearish zone. Further bullish signs on AVAX/USD are shown by the moving averages, 20, 50, and 100, joining the support.

AVAX/USD is bullish based on the technical indicators. Coupled with the positive fundamentals, we are bullish in the medium-term trading on the crypto token. However, the $105 level is a minor resistance for AVAX/USD, and the token is currently consolidating after reaching it. Going forward, I project a short-term price correction before the token surges higher. Therefore, I recommend a buy after a short retracement towards the potential minor support at $96 as long as prices remain above the key level at $81.8. Good luck!

Ethereum Clinging Onto the $2000 Level

U.S. crypto lobbyists in push to contain fallout from stablecoin meltdown By Reuters

Over Exuberance and Joy Turn into Caution and Fear

Fed’s Kashkari: We will get rates to at least neutral by end of year |…

Monero Has Explosive Move to Upside