Celsius Network, a leading US-based cryptocurrency lending platform with a $3 billion valuation, announced last month that one of its senior employees was the focus of an Israeli police probe. The probe is subject to a gag order imposed by an Israeli judge and The Times of Israel is not permitted to reveal the name or identifying details of, or allegations against, the employee. The company announced on November 26 that it had suspended the employee.

The Times of Israel can reveal that a second senior Celsius Network employee, its chief revenue officer Roni Cohen-Pavon, in May established a side business with a convicted money launderer.

Celsius Network, founded in 2017, employs over 100 people in Israel. It operates as a kind of crypto bank that allows clients to deposit cryptocurrency and borrow either cryptocurrency or US dollars. The company recently attracted $750 million in funding from prominent investors, including a Canadian pension fund, and says it manages $26 billion in deposits — compared to $1 billion a year ago. It claims not merely to be benefiting consumers but to be “ushering in a new economy” in which traditional banks will be rendered obsolete by cryptocurrency platforms.

In May, Cohen-Pavon, the Celsius Network’s CRO, registered a new company in Israel with two partners, one of whom is Eliran Oved, a convicted money launderer who went on to run a binary options website.

Eliran Oved spent a year in Israeli prison for running an illegal gambling website, Play2bet.com, in 2004-2008. The site had a turnover of hundreds of millions of dollars, and police said during their investigation that they suspected some of the money gambled on the site came from organized crime groups involved in “illegal activities such as prostitution, drug dealing and loan sharking.”

Celsius told The Times of Israel that it takes regulatory requirements very seriously, has not violated any laws or regulations, and was not required to disclose information about Cohen-Pavon’s side businesses to US regulators. Cohen-Pavon told The Times of Israel that the side companies he established never had any business activity and were not related in any way to his work at Celsius Network.

Cohen-Pavon is a former attorney at leading Israeli law firm Herzog, Fox, Neeman. He left to work for Celsius Network in September 2020. At around that time, he began establishing side businesses. The second of these, NNY Capital Ltd., was set up with Oved on May 5, 2021. On July 1, Oved’s shares were transferred to his wife, Liat Kurtz-Oved. She is the owner of an Israeli call center that ran the binary options website PlusOption.com. The entire binary options industry, which at its height employed thousands of Israelis, was banned by Knesset legislation in 2017 for being widely fraudulent and linked to organized crime. 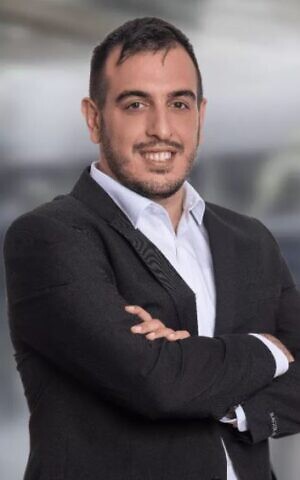 Celsius Network registered as a Money Service Business in the United States on June 18. This means it is required to carry out rigorous anti-money laundering (AML) checks on all users of its platform. The company proclaims on its website that Celsius takes compliance with anti-money laundering rules “very seriously.”

“We have a robust AML program with a knowledgeable team of veteran AML professionals that are Certified Anti-Money Laundering Specialists (ACAMS),” the company website states.

Mikhail Reider-Gordon, an anti-money laundering expert with US-based Affiliated Monitors, a financial due diligence company, and a professor at the International Anti-Corruption Academy in Austria, told The Times of Israel that Celsius would have been required to disclose information about its executives’ side businesses to US regulators.

“US law requires executives of financial institutions, including Money Service Businesses (MSBs), to complete biographical and financial disclosure forms that include divulging all other companies with which they are associated.  The disclosure questions are not asked for prurient reasons, but to ensure money launderers and other criminals do not gain access to financial institutions at a controlling level,” Reider-Gordan said.

“Any financial institution executive who knowingly enters into a business relationship with a convicted money launderer would likely raise the eyebrow of a regulatory examiner,” she added.

Celsius Network told The Times of Israel that “regulation is vital to Celsius’ continued success and growth, and to the cryptocurrencies space as a whole. We are having a very open and productive dialogue with regulators around the world.”

Oved’s name appears in multiple databases used by financial institutions to check individuals for money-laundering risk. Had Cohen-Pavon done a Google search or search of one of these databases, he would have learned of his partner’s background.

Representatives of Cohen-Pavon said that his businesses were side ventures that never had any activity and were wholly unrelated to his work at Celsius.

“Roni Cohen-Pavon has been active in the high-tech industry and has upon occasion encountered various startups. None of the companies in this article, nor any other company related to him, have had any business activity and they are unrelated to Celsius not its activities in any way. Roni Cohen-Pavon spends his entire time and effort in Celsius and its continued growth,” they stated.

Reider-Gordon, the anti-money laundering expert, told The Times of Israel that Celsius Network would still have been required to report Pavon-Cohen’s side ventures even if the companies were not active.

“One of the things the [regulators’] questionnaire is seeking to identify are any business partners or joint ventures that may be those seeking to evade sanctions, are on block lists, or otherwise ineligible due to a criminal record for fraud,  money laundering, etc.”

Celsius Network was founded in 2017 by a Ukrainian-Israeli-American living in the United States named Alex Mashinsky and his Israeli-American partner Shlomi Daniel Leon. The company’s tagline is “Unbank yourself,” and from the beginning, Mashinsky has proclaimed that Celsius Network is part of a history-changing movement to replace the traditional financial system.

“Blockchain-based, decentralized currency is poised to tear down the monolithic foundations of global finance that have existed for centuries, fundamentally reconfigure the methods by which currency is created and…

Crypto in the House: Execs on the march, US partisan politics and Web3 By Cointelegraph