Yesterday’s GBP/USD signal could have produced a profitable long scalp trade from the bullish bounce off the lower trend line of the consolidating triangle pattern.

Trades may only be entered before 5pm London time today.

I wrote yesterday that the short-term technical picture was of a consolidating triangle, the upper trend line of which continued to hold after being tested again just a few hours ago. Despite the support level at $1.3236, I thought it looked likely to break down rather than up.

However I only wanted to take a bearish bias if the price could get established during the London session below $1.3200, and I also thought that a long scalp from a first touch of $1.3236 or the lower trend line of the triangle could be a good trade.

This was a good analysis as the triangle I drew, which is still shown in the price chart below, has continued to hold, so there was an opportunity for a profitable long scalp from the lower trend line. Although the support level at $1.3236 has become re-established after initially breaking down yesterday.

The fact that the price has not broken down below the triangle, and continuing weakness in the US dollar, has made it more likely that we will see the price eventually break up from the triangle. However, the long-term trend is bearish in this currency pair, and the pound is relatively weak, so it may be too early to be thinking seriously about the price rising by much.

I think the best approach will still be to look for scalps at reversals at the triangle trend lines, either upper or lower. This is because the Forex market is likely to remain relatively quiet, despite the emerging positive news regarding the omicron coronavirus variant and its impact upon the risk environment, because the US inflation data which will be released this Friday will be a very key driver of price direction. In the meantime, small trades from reversals off the triangle trend lines is the best approach. 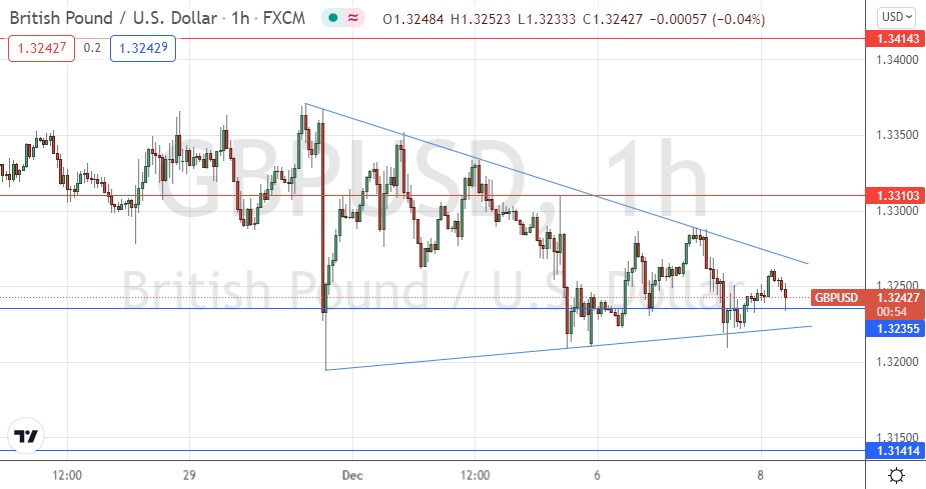 Concerning the USD, there will be a release of JOLTS (job openings) data at 3pm London time. There is nothing of high importance scheduled regarding the GBP.