RBI Tanks Up On Gold


Gold has a very unusual lover. The charm of the yellow metal has had a potent impact on the Reserve Bank of India, which has been on a gold buying spree since 2009. In the first 10 months of this calendar year alone, India’s central bank has bought 71 tonnes of gold, which is the second highest annual level of buying in the new millennium. In 2009, India bought 200 tonnes of gold from the International Monetary Fund (IMF).

According to recent IMF data, at the end of October, RBI gold reserves stood at 748 tonnes, which translates into about 7 per cent of India’s forex reserves. India’s total reserves stood at $639.74 billion, including the gold reserves worth $41.678 billion. In the last calendar year, RBI had bought 41.6 tonnes of gold, which took the yellow metal’s reserves to 676.6 tonnes, translating into 6.9 per cent of RBI’s total reserves.

Every major central bank keeps a portion of its reserves in gold as the metal plays the role of a hedging instrument in times of uncertainty and economic turmoil. During the balance of payment crisis in 1990-91, the Indian government had pledged 67 tonnes of gold to the Bank of England and Union Bank of Switzerland.

This year, the RBI’s gold buying spree has occurred in the backdrop of falling prices of gold in global markets. During uncertain economic conditions, gold price takes an upward trajectory and this was evident last year, when Covid-induced economic turmoil led to gold price touching an all time high of $2,067 per ounce. Since then, GDP across the globe has picked up and the demand for the yellow metal has reduced as economic stability returned. Prices have declined consistently in 2021.

Why is the RBI buying gold when there is tepid global demand for the yellow metal? For one, the economic outlook for 2022 looks uncertain as inflation around the world is inching up. During an inflationary period, gold creates a fine balance in central banks’ overall reserves as rising global inflation means decline in the value of all major currencies including US dollars.

According to RBI data, at the end of March 2021, its total forex reserves were $576.98 billion, in which $536.6 billion were held as Foreign Currency Assets (FCA). Market sources informed Outlook Money that the majority of FCA are in US treasury bills and US treasury bonds. In an inflationary environment, any decline in the value of the US dollar would adversely impact India’s forex reserves. Any dollar weakness would have a profound impact on the current account balance of a commodity-importing nation like India. A plunge in the value of a fiat currency like US dollar or Euro could be countered by raising gold reserves.

Moreover, due to high debt in every major economy, central banks of these nations are not able to raise interest rates. Lower nominal interest rates along with rising inflation is creating buoyancy in precious metals markets as investors are more willing to park money in gold and silver than in advanced nations’ bonds that are yielding negative or insignificant rates. 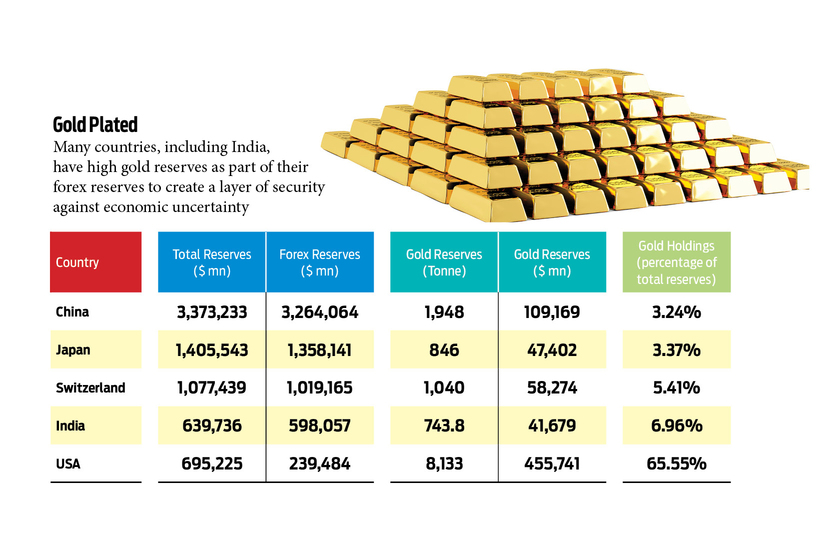 Is RBI alone in buying gold to diversify its reserves? No. Central banks across the world collectively bought 393 tonnes of gold till September-end and may cross 450 tonnes by the year-end, according to the Gold Hub report published on October 28, 2021. The Central Bank of Thailand has been the biggest buyer of yellow metal in this calendar year