The Pound to Dollar exchange rate was riding a strong daily advance before the Chairman of the Federal Reserve warned a rate hike might come sooner than expected.

Jerome Powell said it would be “reasonable to think about wrapping up tapering a few months earlier” if fears regarding the Omicron variant proved to be overblown.

The Dollar jumped on the comments, reversing broad based losses suffered earlier, confirming the market was repricing for a slower unwind of monetary stimulus from the Fed.

The Fed began reducing the amount of bonds it purchased under its quantitative easing programme in November with a view to ending it completely in the first half of 2022, but the emergence of the Omicron variant saw investors begin to expect this time table to be extended.

That would mean the first rate hike would come later than had been expected heading into last Friday’s Omicron selloff.

“Jerome Powell has provided a surprisingly hawkish stance, with the Fed chairman stating that he could see the tapering process speed up if the current Omicron fears prove ill-founded,” says Joshua Mahony, Senior Market Analyst at IG. 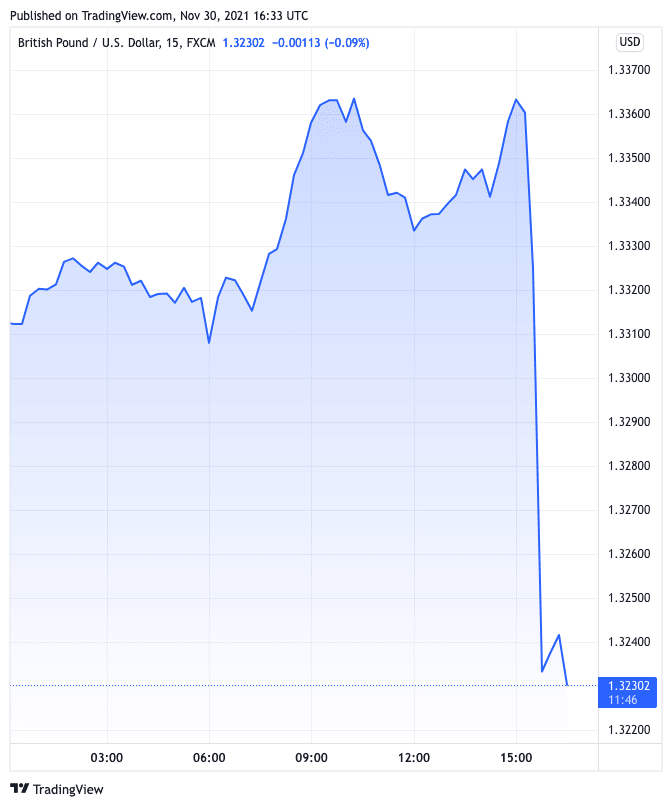 FX transfers: Secure a retail exchange rate that is between 3-5% stronger than offered by leading banks, learn more. (Advertisement).

Heading into Powell’s testimony to U.S. lawmakers stock markets had been volatile, falling sharply earlier in the day on comments from the boss of Moderna that current vaccines would likely prove less effective against the Omicron variant.

Losses were pared following comments from BioNTech’s Uğur Şahin – the inventor of the vaccine that Pfizer manufactures and distributes – that the new variant could lead to more infections, but vaccinated people will likely remain protected from severe disease.

Oxford University, who invented the vaccine distributed by AstraZeneca, also offered some supportive news with a statement that said:

“Despite the appearance of new variants over the past year, vaccines have continued to provide very high levels of protection against severe disease and there is no evidence so far that Omicron is any different”.

Amidst fraught investor sentiment it was anticipated Powell would nod to the risks posed by another potential Covid wave linked to Omicron and sound an air of caution.

But his assertion that rising inflation means withdrawing supportive monetary policy must proceed appears to have come as a surprise.

“Another bout of commentary from Jerome Powell over the economic and inflation risks posed by this latest Covid strain highlight how the bank still remains in position to tighten policy further if necessary,” says Mahony.

“We remain within a phase of uncertainty, with the Fed expected to adjust or reiterate their policy stance once the scientists provide greater clarity over this strain,” adds Mahony.

Brent Donnelly, who heads Spectra Markets, says he is now looking to sell the Pound-Dollar exchange rate on the Powell developments.

He says the exchange rate ‘gapped’ lower around the comments – a strong move that leaves gaps on a chart.

Donnelly says the move “sets up nicely for a short with a stop back up in the old equilibrium zone. That is, short around here, stop at 1.3333 for another big move lower over the next 48 hours on uberhawk Fed.”

What is on the calendar today? Fed’s Powell highlights the events and releases…