Opportunity to Break the Trend


A state of risk-aversion prevailed in global financial markets at the end of last week’s trading amid decisions by countries around the world to impose restrictions due to a new variant of the Corona virus that resists available vaccines. The gains of the Japanese yen increased against the rest of the other major currencies, and the USD/JPY retreated to the 113.05 support level, the lowest in more than two weeks, before closing trading stable around the 113.35 level. The resistance is 115.00.

The yen is a popular asset during turbulent times.

By the end of trading, US stocks tumbled, with the Dow Jones Industrial Average dropping briefly by more than 1,000 points, as a new virus appeared for the first time in South Africa and appears to be spreading strongly and rapidly throughout the world. Investors were unsure whether the alternative could reverse months of progress in controlling the COVID-19 pandemic.

The Standard & Poor’s 500 Index fell 106.84 points, or 2.3%, to close at 4,594.62 points. It was the worst day for the Wall Street benchmark since last February. The index fell on everything from banking stocks, travel companies and energy companies as investors tried to change their positions to financially protect themselves from the new variable. The World Health Organization described the variant as “highly contagious”.

The price of oil fell by about 13 percent, the largest drop since the beginning of the epidemic, amid fears of another slowdown in the growth of the global economy. This, in turn, led to a decline in shares of energy companies. Exxon shares fell 3.5 percent, while Chevron shares fell 2.3 percent. The leading stocks closed down by 905.04 points to end the day at 34899.34. The Nasdaq Composite Index lost 353.57 points, or 2.2%, to 15,491.66 points.

And there were other variants of the coronavirus – the Delta variant devastated most of the US all summer – and investors, public officials and the general public were concerned about any new variant spreading. It has been nearly two years since the emergence of COVID-19, which has killed more than 5 million people worldwide so far.

Cases of the new variant have been found in Hong Kong, Belgium and Tel Aviv as well as major South African cities such as Johannesburg.

The economic effects of this alternative were already being felt. Both the European Union and the United Kingdom announced travel restrictions from South Africa on Friday. After the market closed, the United States also placed travel restrictions on arrivals from South Africa as well as seven other African countries. As a result, the airline shares were quickly sold off, with United Airlines falling 9.6% and American Airlines shares falling 8.8%.

Commenting on the event, Douglas Porter, chief economist at BMO Capital Markets, said: “It appears that COVID has been put in the rear-view mirror by financial markets until recently. At the very least, it (the virus) is likely to continue to throw sand into the global economy in 2022, limiting recovery (and) keeping supply chain kinks.”

Even Bitcoin got sold off. The number one cryptocurrency fell 8.4% to $54,179, according to CoinDesk. In Nantucket, Massachusetts, where he is spending the weekend, US President Joe Biden said he was not worried about the market’s downturn. “They always do it when something has to do with COVID,” Biden stated. One sign of Wall Street concern was the VIX, a measure of market volatility sometimes referred to as a “fear gauge.” The VIX jumped 53.6% to a reading of 28.54, its highest reading since January before widespread vaccinations began.

Fearing more shutdowns and travel bans, investors have funneled money to companies that have benefited most from previous waves, such as Zoom Communications for meetings or Peloton for exercise equipment at home. Shares in the two companies rose by about 6%. Also, manufacturers of the coronavirus vaccine have been among the biggest beneficiaries of the emergence of this new alternative and the subsequent reaction of investors. Pfizer shares are up more than 6% while Moderna shares are up more than 20%.

But Merck shares fell 3.8 percent. While US health officials have said Merck’s experimental treatment for COVID-19 was effective, the data showed that the pills weren’t as effective at keeping patients away from the hospital as originally thought.

All in all, investors are concerned that the supply chain problems that have affected global markets for months will only get worse. Ports and shipping yards are at risk and could be closed due to the new local outbreak. “Supply chains are really stretched,” said Neil Schering, an economist at Capital Economics in London. “A new and more serious virus wave could cause some workers to temporarily leave the workforce and deter others from returning, adding to the current labor shortage.”

On the daily chart, there is a clear change in the general trend to the downside, and the bears’ control will increase by surpassing the 113.00 support. If that happens, the next support levels will be 112.55, 111.80 and 110.90. To the upside, bulls need to break through the 114.60 resistance again to control the trend again. The opportunity to rise still has time and everything will depend on risk appetite, in addition to important US economic data this week led by the US jobs numbers and the testimony of Jerome Powell. 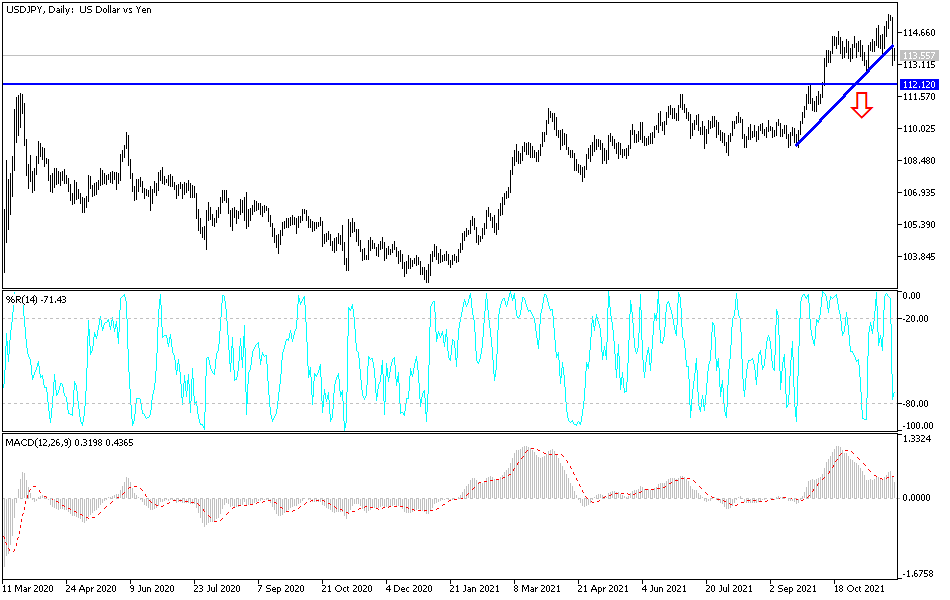 Index Continues to Grind Back and Forth