Is the Catalyst for Cannabis Investors Finally Here?

Will The U.S. Legalize Cannabis?

Cannabis investors finally caught a break last week following news the Republican party is working to introduce its own version of a federal cannabis bill, which could be sent to the House of Representatives before year-end.

The Republican initiative coincides with the Democrat’s current legalization effort led by Senate Majority Leader Chuck Schumer, and now both sides of the aisle are working towards cannabis reform at the Federal level.

It’s still early, but this could be the catalyst to supercharge an industry whose recent stock performance has been anything but promising.

With the cannabis trade back in play, let’s look at recent industry performance, an efficient way to gain exposure to U.S. cannabis companies, and a potential short-term options trading strategy that can also be used to possibly enter a long stock position over the long-term.

Support For Legalization Is Going Up, Cannabis Stocks… Not So Much

Since 2018, the market for cannabis stocks and ETFs has experienced a series of booms and busts. The recent cycle peaked earlier this year following the election of President Biden. As the general expectation that Democratic leadership would be more cannabis friendly relative to the prior administration hasn’t exactly played out in a linear fashion, the exuberance around cannabis stocks has been lost, and many names in the space are down nearly 50% from their February highs.

Counterintuitively, cannabis stock prices have also been falling as support for legalization continues to rise.

Presumably this increased acceptance and further legalization at the state level will translate into increased sales over time, but for the market to reach some analysts lofty estimates of 90 billion dollars in sales globally by the end of this decade, it ultimately hinges the U.S. legalizing cannabis nationally.

The road towards legal cannabis in the U.S. is likely to be a bumpy ride. The U.S. legislative process can be arduous, but given recent developments, I’d argue the probability is as high as ever. So, if this materializes and we start to see serious capital flow into cannabis companies, how can we get exposure?

Presently, investors often look towards cannabis focused ETFs and the multitude of Canadian producers such as Canopy Growth (CGC) or Aurora Cannabis (ACB). These vehicles might act as a market proxy for the growth of the global cannabis industry, but they’re not a direct investment in the growth potential of the world’s largest cannabis market, the U.S. consumer.

As cannabis is illegal at the federal level, it’s not particularly easy to invest in U.S. cannabis companies. Most banks won’t finance their operations, and U.S. cannabis stocks aren’t listed on major exchanges. Instead, they trade in the OTC market (over the counter). This doesn’t mean we can’t trade them, but for many investors, trading an exchange listed stock or ETF is often more efficient. Which brings us to one of the only ETFs that provides exposure to U.S. multi-state cannabis operators, MSOS.

MSOS is the AdvisorShares Pure US Cannabis ETF, and it holds positions in some of the largest U.S. companies like Green Thumb Industries (GTBIF), Trulieve (TCNNF), Curaleaf (CURLF), Cresco Labs (CRLBF), Verano (VRNOF), and TerrAscend (TRSSF). These are companies many investors might not yet be familiar with, but that have market caps much larger than a majority of the well-known and publicly traded Canadian producers. This is illustrated in the chart below comparing market caps across the industry as well as the revenue growth rates (1Y TTM) for many of these companies. 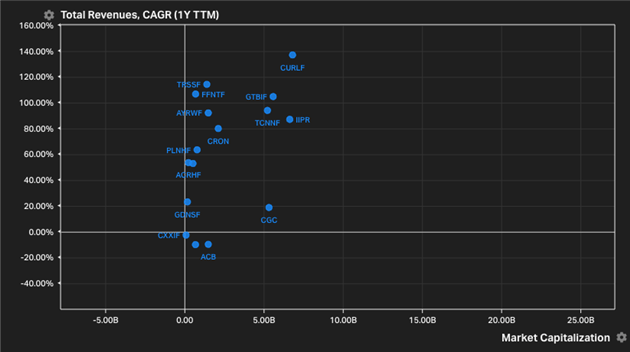 Following the news flow and current developments in the cannabis market, let’s now look at an MSOS options trading strategy we could possibly use to express a bullish view. 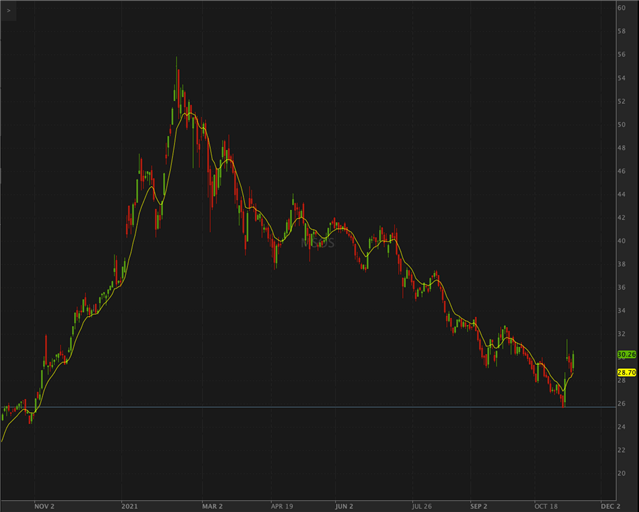 As you might expect of an asset that’s seemingly only gone down in price, MSOS trades with a relatively high level of implied volatility, currently at 61%. Additionally, when looking at its IV rank, which measures the current level of implied volatility against its yearly range, we have an IV rank of 58. In general, this indicates that while MSOS options are not at their most expensive levels, they’re not relatively cheap either. As a result, the market might be presenting an opportunity to sell downside risk premium in the form of a cash secured (naked) put option.

Below is an example of this strategy, selling the MSOS 28 strike put in the December (monthly) expiration for a price of $1.30. 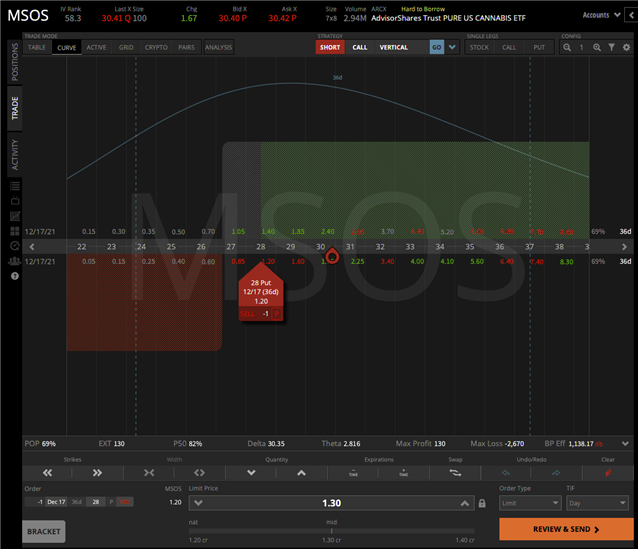 A cash secured put is a unique trade since it can profit in 2 out of 3 scenarios. Yes, we want the underlying price of MSOS to increase for this trade to be profitable, but with this strategy we only need the price to stay above $28 by the expiration date of 12/17/21. If it does, the 28 strike put option will expire out of the money (worthless) and we’ll realize our maximum profit of $130, which is the credit we received for initially shorting (writing) the option.

Now, what if the price of MSOS goes down? In the event MSOS decreases, we won’t actually lose money on the trade at expiration, unless MSOS is below the break-even price of $26.70 per share. Beak-even is calculated by taking the option strike of 28 and subtracting the $1.30 credit. Should this occur, the trade’s risk is essentially the same as if we owned 100 shares of MSOS at $26.70 per share.

Finally, a cash secured put can also be used as a potential strategy for entering a long-term bullish investment. If the option position is held past the expiration date and the price of MSOS is below $28, the option will expire in-the-money and will be automatically exercised. As a result, the trader will be assigned 100 shares of MSOS, creating a new long stock position at a cost basis of $26.70 share.

As mentioned previously, cannabis reform could be a long time coming and these companies are likely to continue experiencing high levels of volatility, but for now, this volatility might present traders with numerous opportunities in the options market.

Read More : Is the Catalyst for Cannabis Investors Finally Here?

ABCON seeks stable exchange rate in roadmap to save naira