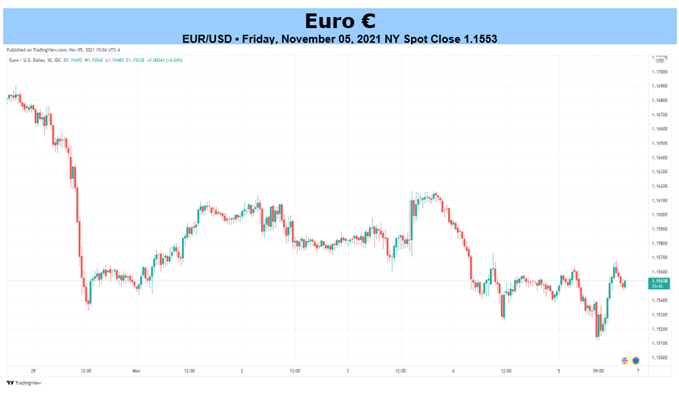 So much for the outlook for the Euro brightening. The first half of last week saw EUR/USD head higher but the direction reversed Thursday and now the outlook has turned bleaker again, with the long-term downtrend in the pair likely to resume.

As ever, interest rate expectations are key here. European Central Bank President Christine Lagarde’s dovish comments on Eurozone monetary policy the week before were largely shrugged off. But if the Federal Reserve and Bank of England meetings last week taught us anything it was that the major central banks are generally more dovish than the markets.

First, US Federal Reserve Chair Jerome Powell emphasized that the end of bond buying does not mean a rush to raise interest rates.Then the Bank of England confounded the markets by keeping UK Bank Rate at 0.1% rather than increasing it to the 0.25% that the markets had priced in.

So even though the Fed pushed back from using the word “transitory” to describe inflation, it does seem that the major central banks still believe that inflation will rise further but then drop back – negating the need for rate rises.

Against this background, the markets were more willing to believe Lagarde when she was dovish again last week. The ECB is very unlikely to raise interest rates next year as inflation remains too low, she said, and down went the Euro as this time the markets realized that the hike once expected as early as next October may indeed not materialize.

Source: IG (You can click on it for a larger image)

That said, if so many of the major central banks are challenging market pricing of interest rate rises, why should the Euro suffer more than the US Dollar or the British Pound? The simplest explanation is bond yields, with the benchmark 10-year German Bund yielding minus 0.2255% at the time of writing, compared with positive yields of 0.943% for the 10-year UK Gilt and 1.531% for the 10-year US Treasury note.

For a money manager, the negative income from German Bunds is clearly a disincentive to buy them unless prices are expected to rise. In this context, it will be interesting to see the level of demand for the 10-year Bunds being auctioned Wednesday in what could be the most important event of the week for Euro traders.

Turning to the economic data, releases are thin on the ground this coming week, with Germany’s ZEW economic sentiment index for November arguably the highlight. Analysts polled by the news agencies are predicting a drop to 19 from October’s 22.3, suggesting that economic optimism about the next six months has fallen back – potentially another negative factor for the beleaguered Eurozone currency.

Like to know more about EUR/USD and why to trade it? Check out this article here

DAY IN THE LIFE of a Forex Trader