Last Wednesday’s GBP/USD signal was not triggered as there was no bullish price action when the support level identified at $1.3741 was first reached that day.

Trades may only be entered prior to 5pm London time today.

I wrote last Wednesday that the technical picture looked very consolidative, with few key support or resistance levels nearby. The only nearby level which looked as if it might be of any importance was $1.3741 which I thought would probably be hit and might produce a more extended breakdown if breached. This was an OK call as the level was quickly reached, and the price continued to fall but only for about another 30 pips.

The technical picture is not really any clearer now. Price action is quite choppy here and direction looks difficult to predict. At the time of writing, the price is trapped in a very narrow range between $1.3632 and $1.3625 but I do not think a breakout in either direction is going to tell us much.

The fact that there is a very major release due later (the FOMC statement and press conference) which will likely cause volatility in the US dollar makes today’s price movement even harder to forecast.

This is probably not going to be the best currency pair to trade during today’s London session but following the FOMC release we may see a dramatic price spike here which could probably be traded again, so one approach might be to have a limit buy order at $1.3502 and a limit sell order at $1.3709, and hope that the release spikes the price to hit one of these levels. 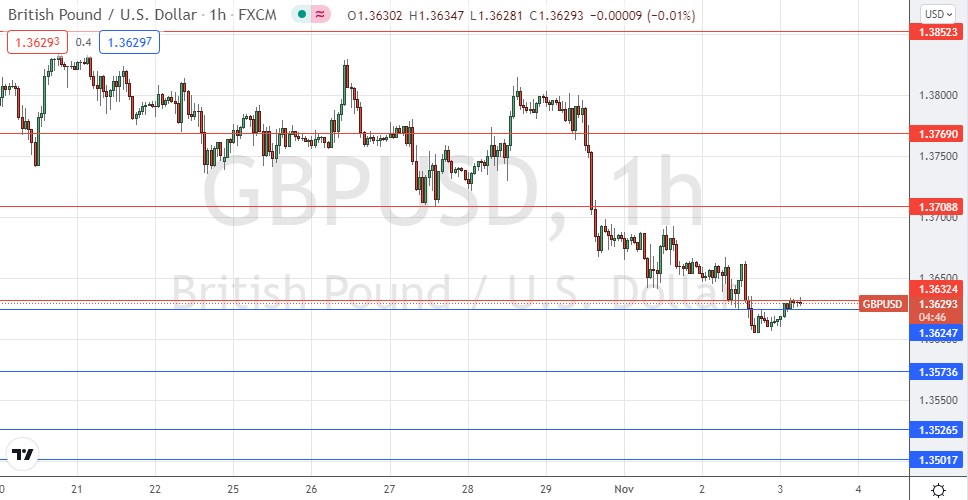 Regarding the USD, there will be a release of the ADP non-farm employment change forecast at 12:15pm London time, followed by ISM Services PMI at 2pm and the FOMC Statement and Federal Funds Rate at 6pm with the usual press conference half an hour later. There is nothing of high importance scheduled regarding the GBP.