INR/USD speculators need to be braced for whipsaw conditions to potentially be displayed today and tomorrow, as the Forex pair tests important mid-term lows.

The rupee has been extremely popular lately – don’t miss these interesting opportunities!

The USD/INR has continued to produce a very clear bearish trend. On the 1st of November, the USD/INR was trading near 75.0400 before it came under the grip of more selling momentum, which has been demonstrated periodically in the Forex pair the past month for spurts of time. Prior to those short-term highs being made, the USD/INR was trading near the 74.7300 ratio and testing short term lows on the 29th of October.

However, as of this morning, the selling within the USD/INR has grown stronger and a low of nearly 74.5000 is being tested now. The lowest depth seen thus far today was near the 74.4300 ratio. Fast conditions have been exhibited and traders should prepare for this characteristic to continue today and tomorrow. Not only is the USD/INR near important mid-term support levels which were last seen in the first week of October, but later today the U.S. Federal Reserve will release their interest rate policy statement which is sure to shake up Forex.

Traders need to prepare of the possibility of massive volatility and choppy results to cause price bedlam within the USD/INR as financial institutions and large traders make their transactions. Technically it is intriguing that the USD/INR finds itself testing important mid-term support hours ahead of the U.S. central bank pronouncements. Traders should expect surges in value in both directions to flourish before and after the news from the U.S. is released. Cautious traders may decide it is wise to sit on the sidelines today and wait for the announcement to be read from the Federal Reserve.

Aggressive traders are advised to have their stop loss and take profit orders working and to use amounts of leverage which they can afford. Make no mistake about the trading environment which will take place; values will move fast, the only question is where equilibrium of prices will be found. As the USD/INR rests near important support it may be natural to think additional moves lower will be demonstrated, and this could actually be the case today. However, traders should also expect quick reversals higher to flourish.

Cautious traders may want to wait for the announcement from the U.S. Fed tonight to be released and then act only after trading has calmed down. There is reason to suspect the USD/INR could see a wave of buying be demonstrated later today, and then a reversal lower develop after the reaction has been digested from the States. 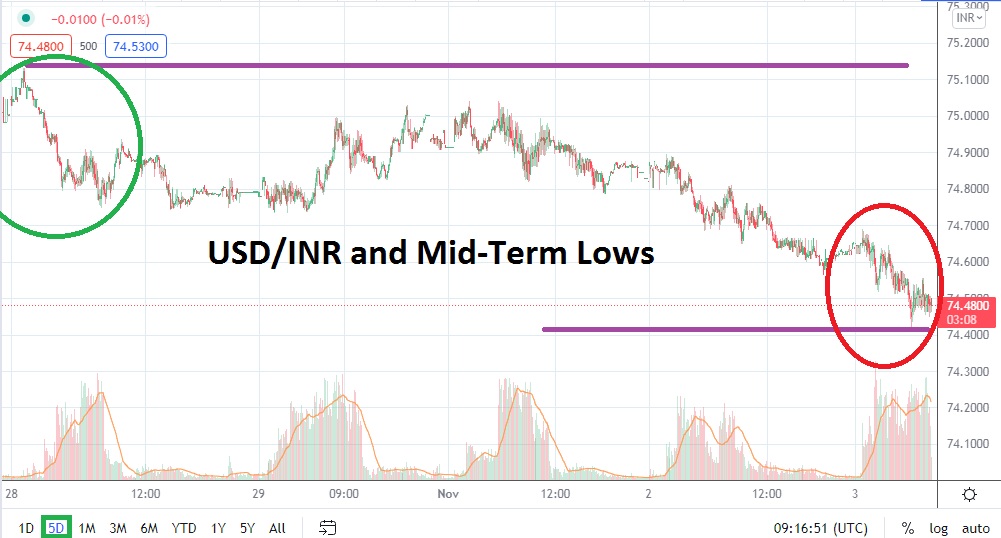