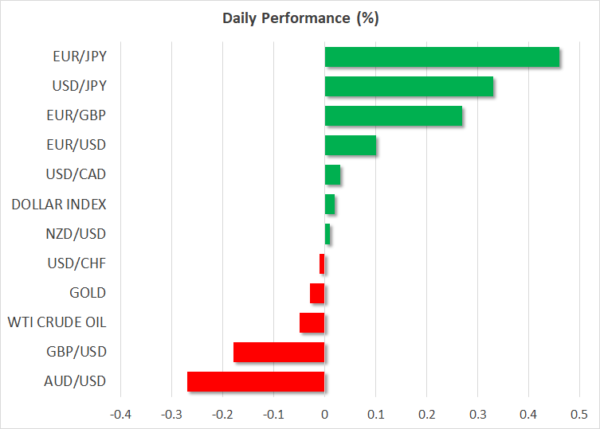 Positive start to month as markets look past China jitters

Global equities have started November mostly in positive territory, buoyed by fresh all-time highs by Wall Street’s leading indices on Friday. Optimism seems to be the name of the game as worries about central banks winding down their pandemic-era stimulus and rising cost pressures from worsening supply constraints have yet to leave any permanent scars in stock markets.

In an earnings season where more than 80% of the S&P 500 companies that have reported have beaten their estimates, Apple and Amazon were the exception. The two tech behemoths warned on Thursday of a weaker quarter ahead, blaming component and labour shortages. However, it didn’t take long for their shares to rebound slightly on Friday.

There was fresh evidence in China over the weekend about the severity of the ballooning cost pressures on industry as well as on output being kneecapped by broadening supply shortages. China’s official manufacturing PMI fell further below 50 in October, indicating another month of contraction in the sector.

However, the equivalent Caixin/Markit private survey was a little more upbeat, with the PMI rising to 50.6 in October. Other Asian manufacturing gauges were even stronger, as regional economies got a boost from easing coronavirus restrictions.

Spending hopes lift stocks but for how long?

As has been the case lately, markets are more inclined to see the glass half full than half empty. But the reopening boost in Asia isn’t the only cause for optimism as investors can smell more fiscal spending in Japan and the United States.

Hopes are riding high in Tokyo that the stronger-than-expected performance of the ruling LDP party in Japan’s general election on Sunday will enable the new prime minister, Fumio Kishida, to press ahead with a promised spending package aimed at kickstarting the economy that has been blighted by months of Covid curbs.

The Nikkei 225 index ended the session 2.6% higher, with only shares in Hong Kong and China bucking the positive trend. US stock futures were up too, pointing to solid gains of about 0.3%, while European shares surged at the open.

Whether the bullish mood can be sustained or not in the coming days will probably depend on what the Fed says on Wednesday and if Congress can get its act together and pass President Biden’s keystone economic legislation.

Divided Democrats edged closer to a compromise last week on Biden’s ambitious social spending bill as the President unveiled a framework for the bill. The House is due to vote on Tuesday on the bill. But while there is a strong chance that the party will come together and approve the legislation, there is still some uncertainty about which way the vote will go given Democrats’ narrow majority in the House.

The increased risk appetite weighed heavily on the safe-haven Japanese yen on Monday even as investors saw the domestic economy’s outlook brighten on the back of Sunday’s election outcome. But the US dollar sought to extend last Friday’s advances as the pound and Australian dollar faltered.

The Fed is widely expected to announce on Wednesday the commencement of tapering its $120 billion a month in asset purchases. But the bigger focus will be on Chair Powell’s updated view on inflation and whether he still thinks that the price jumps are transitory or not. Any suggestion by Powell that he is increasingly concerned about higher inflation becoming persistent could further fuel bets that the Fed will hike rates in the middle of 2022.

In the meantime, the Bank of England seems poised to raise its policy rate as early as its next meeting on Thursday. A dramatic hawkish shift at the BoE have lifted sterling off multi-month lows over the past month but in recent days, the currency has come under renewed pressure. While the slide is partly attributed to a stronger dollar, some paring back of market expectations of a November rate hike are also to blame amid doubts about whether the hawks outnumber the doves in the MPC.

There is also some uncertainty about the Reserve Bank of Australia’s policy meeting on Tuesday and this is spurring a retest of the $0.75 level for the aussie. After failing to defend its target on the three-year bond yield last week, the RBA will probably abandon its yield curve control programme, but policymakers will probably find another way of talking down rate hike bets through a new forward guidance.