The price of gold has been rising across the daily trendline support and taking on the 200-day EMA. The upside in gold is lacking conviction as it struggles to take off despite the intensifying concerns about global inflation.

The volatility came in a busy day of central bank-driven activity this week that started in Australia (Inflation came in hot), Japan (bucking the inflation trend) and then Europe and precedes a meeting of the US Federal Reserve next week.

“The market is very much triggered and sensitive to inflation worries and this notion that central banks are behind the curve,” said Mazen Issa, senior currency strategist at TD Securities. A contributing factor to the volatility, Issa said, is the approaching end of the month when more investment managers rebalance their portfolios across currencies.

Prior to her presser, the euro moved little as the ECB, as expected, kept policy unchanged, reaffirming its plan to keep buying bonds and hold down interest rates for years to come. However, Lagarde’s comments were taken as less dovish for the concerns that inflation was not as transitory as first thought.

The ECB still sees the period of higher inflation as transitory but has become much more balanced with its outlook. This is making way for further asset purchase reductions in December. Lagarde preempted parts of the ECB’s December debate by announcing that she expected the Pandemic Emergency Purchase Programme (PEPP) to end as planned in March next year.

DXY has dropped to 93.278 on the day from a high of 93.969 which has seen a spike in the daily ATR and a test of the daily trendline support. 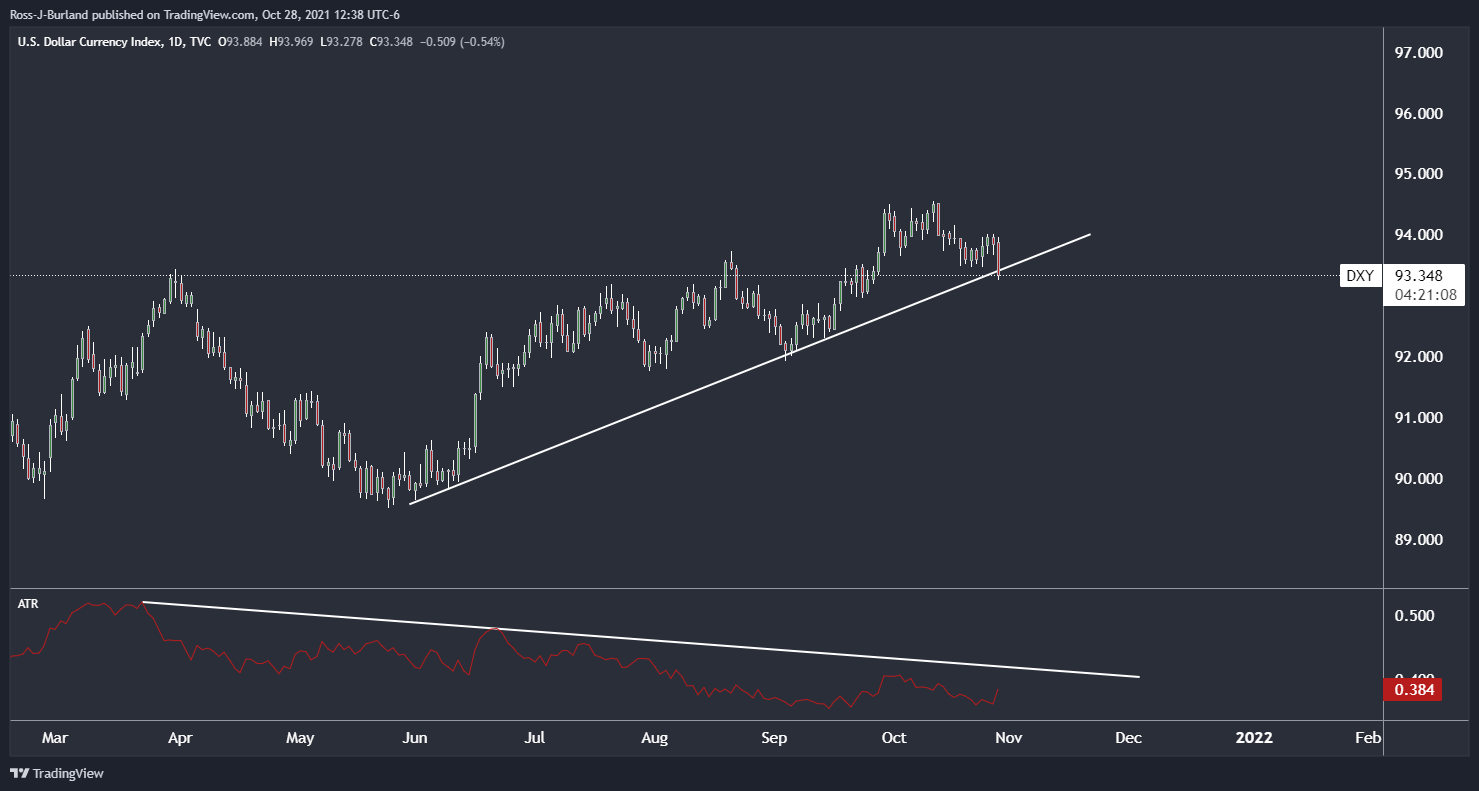 US yields are helping to support the greenback off the lows of the day. However, if the 10-year fails to reclaim territory back within the ascending trend, as marked by the daily counter-trendline, then the downside is more probable. A Head & Shoulders could be in the making here: 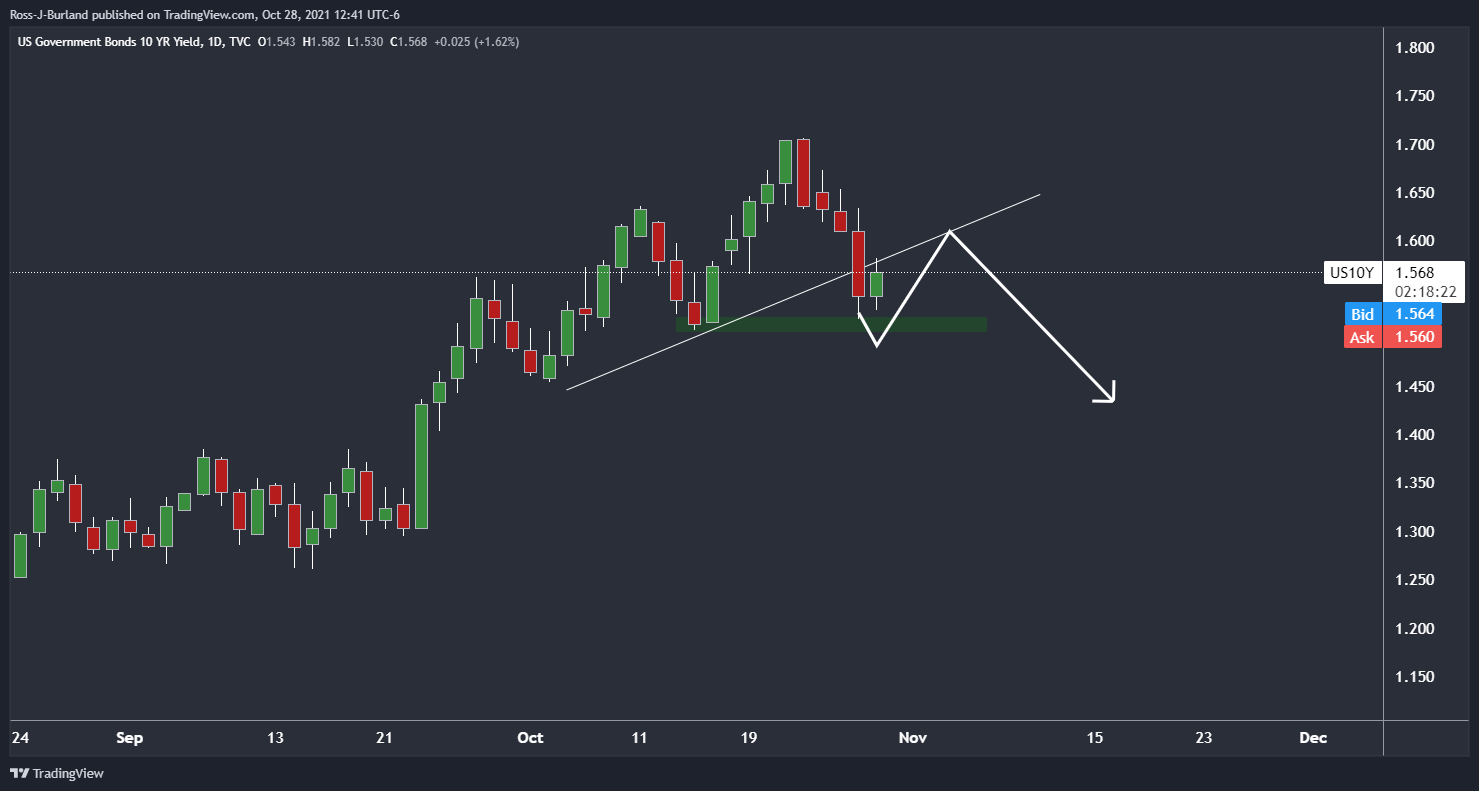 Meanwhile, US Gross Domestic Product growth decelerated to 2.0% in Q3 from 6.7% in Q2. A large part of the slowing in US GDP growth in the third quarter can be attributed to supply chain disruptions limiting the availability of products for purchase.

The economy is expected to grow more quickly in the fourth quarter. ”Still, it looks increasingly likely that much of the ‘easy’ growth to be had from the re-opening of the economy is in the rear-view mirror, and further gains will be harder to come by,” analysts at RBC Economics said. ”We look for GDP to increase at a stronger 4.5% annualized pace in Q4.”

Precious metals gear up for a breakout

Analysts at TD Securities have explained that the price action in precious metals has been building towards a breakout.

”While the yellow metal is dramatically underperforming against the sharp slump in real rates, it is holding firm against market pricing for more than 2 Fed hikes by year-end 2022.”

”The aggressive central bank pricing has reverberated across global bond curves as Treasuries price in the first hike in July 2022 and a 90% chance of a hike in June, despite the fact that tapering is on course to only ending by June.”

”The hunt for inflation protection should continue to prop up interest in the yellow metal as real rates sink. Reasons to own the yellow metal are growing more compelling as Fed pricing is likely to unwind in the coming months as a US fiscal drag starts to weigh on growth data.”

The bulls are breaking the 200-day EMA and riding the dynamic support that was reinforced by the 21-day EMA. The upside is more probable with a run towards $1,830 in prospect.