ETH/USD appears ready to begin the month of November near all-time prices as it closes out October with its bullish trend displaying strong capabilities.

A roaring upwards success for ETH/USD has been produced as Ethereum reversed off perceived bearish sentiment. Since the last day of September, and from the 1st of October until right up to this writing, ETH/USD has demonstrated significant bullish momentum.  ETH/USD is hovering above 4300.00 now and it broke its all-time record value on the 29th of October when it hit the 4450.00 juncture. The ability of Ethereum not to suffer a significant selloff after breaking its price record is an indication more buying could follow.

However, that doesn’t tell the whole story. Just last month, as October began, it was easy to have a rather pessimistic attitude about the outlook for ETH/USD. Cryptocurrencies can humble all speculators and they can make analysts look foolish too, and the turnaround in Ethereum and its major counterparts in the month of October has been another life lesson. Buying sentiment in ETH/USD has maintained a strong trend. On the 1st of October, Ethereum essentially began the trading day near the 3000.00 juncture; meaning ETH/USD has gained over twenty-five percent in value since then.

Speculators have been in this position before facing questions about over exuberance, and needing to contemplate the potential the trend will suddenly reverse. The possibility that ETH/USD could suddenly move lower and begin to knock out support levels is not farfetched. However, the current price velocity of ETH/USD could make the bravest of sellers nervous. As the month of November gets set to start and having seen record highs brushed to the side, traders may be asking just how high Ethereum can traverse in the weeks ahead.

Moves of twenty-five percent in one month are not out of the question, and crypto traders know there can be volatility and many of them crave it. Risk management remains a cornerstone for trying to wager in the cryptocurrency sector. ETH/USD, even though it is a significant player in the digital asset realm, can enjoy and suffer spikes suddenly. If ETH/USD is able to break above the 4500.00 mark and sustain values above, traders cannot be blamed for starting to believe the 5000.00 ratio will be a logical target. However, speculators are reminded to remain logical and not become overly ambitious.

On the 21st of October, ETH/USD did hit the 4370.00 mark and it took an additional six days of trading to hit the high again. After the 4400.00 mark was surpassed on the 29th of October, the ability of Ethereum to maintain the higher price realm has been impressive. If ETH/USD can sustain its value above 4300.00 near term, it may add fuel to speculative bullish momentum.

ETH/USD has done remarkably well the past month, but support levels still need to be watched.  Ethereum has reversed violently lower in the past and its history of turbulence likely has many chapters to still write. If the 4300.00 to 4200.00 marks falter and the 4000.00 ratio becomes vulnerable, traders may believe support near 3910.00 could be a significant road sign. If this value were to be penetrated lower ETH/USD could give back some of its gains made the past month and test greater depths.

Speculative bulls who have been optimistic and been buying ETH/USD are likely feeling positive. But before becoming over-confident with more buying positions, they might want to see ETH/USD break through the 4400.00 again and sustain values. If ETH/USD is able to break the 4500.00 mark and the broad cryptocurrency market remains exuberant, traders may aim for new record prices which could exceed the 5000.00 level. Using take profit and stop loss orders with ETH/USD is highly advised as the cryptocurrency market boils with enthusiasm, because things can change in a hurry. 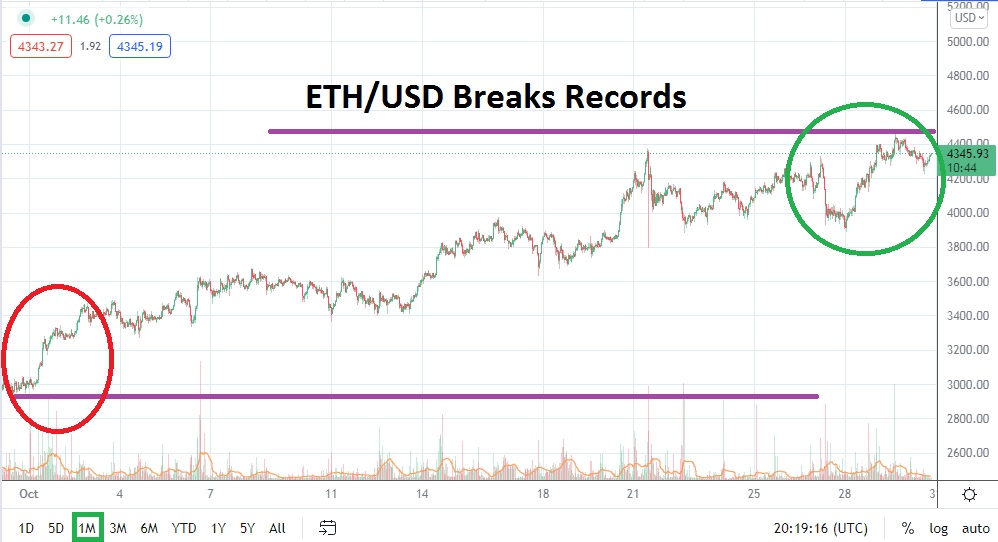