ADA/USD appears ready to begin November trading with a rather perplexing bearish trend continuing to be demonstrated.

On the 2nd of September, ADA/USD achieved an all-time high of 3.100000, but October’s high for Cardano only reached a height of about 2.370000 on the 7th of October. While the broad cryptocurrency market is showing signs of over exuberance it would appear on the surface that ADA/USD had already enjoyed its day in the sun almost two months ago and that the glory may be fading. However, short-term viewpoints when trading cryptocurrencies are packed with folly and the market has a habit of changing perspectives quickly.

ADA/USD is still trading within sight of the 2.000000 ratio. Trading in October has seen another downturn and support has been tested near the 1.780000 ratio within the scope of a ‘flash’ crash experienced on the 21st.  Another low of nearly 1.850000 was produced on the 28th of October. However, the bearish momentum going into November could fuel a wave of contrarian speculators who believe Cardano may be ripe for a reversal higher because it is potentially oversold.

Technically, if ADA/USD were to fall below the 1.850000 mark, this would certainly set off alarm bells, the last time the cryptocurrency sincerely traded this vicinity with any stamina was in August of this year. While many of its major counterparts have enjoyed bullish speculative behavior in October, ADA/USD has actually produced a rather incremental decrease in resistance levels. Traders who are intrigued by long-term charts will also notice that ADA/USD is trading near important support levels seen during the first wave of massive exuberance, demonstrated in the spring of this year when Cardano achieved a high of nearly 2.440000 accomplished in May.

However, after hitting that spring high, Cardano suffered a steep decline like nearly all of the other major cryptocurrencies and a lows below 1.000000 were displayed in late June and July. ADA/USD does not correlate with the broad cryptocurrency market in many respects because it maintains its own blockchain. Its behavioral sentiment technically could be argued and viewed as not being part of a reactive trading landscape. While that can be good in many cases, it can also be viewed negatively when the broad market is doing well and Cardano appears to be struggling for speculative value.

Traders may be looking at the lows being made in ADA/USD and wondering if this is a good opportunity to wager. A reasonable technical question is if this is the deep end of the pool and support levels being challenged now will begin to produce reversals higher in November. Traders are likely asking if ADA/USD can begin to traverse a range between the 2.100000 and 2.300000 largely practiced in October.

ADA/USD has produced perplexing result the past month of trading. Instead of becoming exuberant like many of its major counterparts, Cardano has languished within a rather steady bearish downturn. Support levels should be watched carefully near the 1.900000 mark, if these prove vulnerable ADA/USD could face a stronger downturn which begins to target the 1.800000 to 1.700000 regions.

If ADA/USD can remain within sight of the 2.000000 juncture short term and the broad cryptocurrency market remains stable this could fuel the ambitions of bullish traders. If trading moves above the 2.000000 and can be sustained, there is plenty of reason to suspect the 2.100000 to 2.200000 vicinities are realistic targets. Traders should practice their risk management tactics carefully. Cardano can be extremely volatile and spikes are not uncommon. Bullish traders looking for upside momentum should not be overly ambitious and it they do catch a wave upwards, cashing in profits is a worthwhile idea by using take profit orders that are realistic and not aiming for the stars. 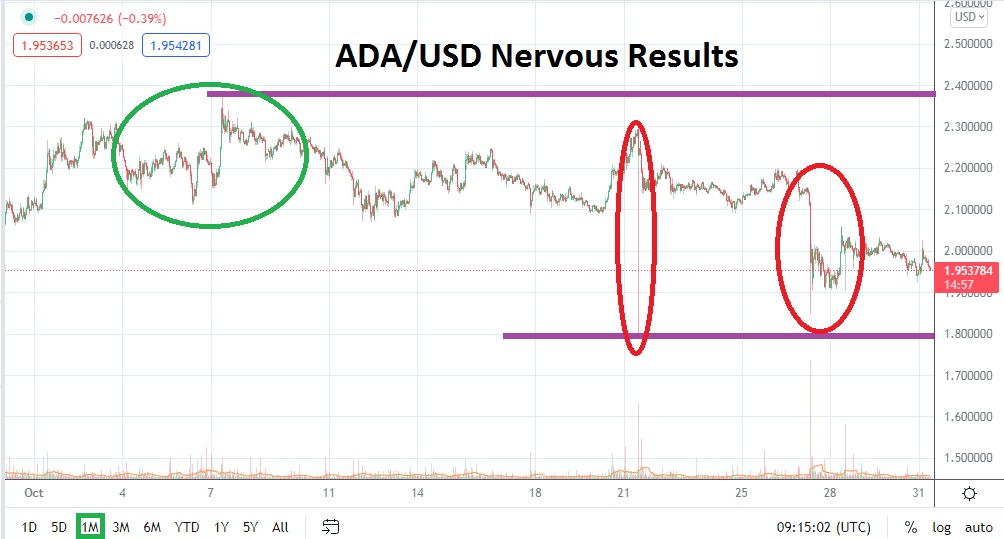 Forex Today: A quiet start to the third quarter ahead of key data releases