The Central Bank of Brazil raised the nation’s benchmark Selic rate by 150 basis points on Wednesday, the bank’s largest hike in nearly two decades. Plans for additional fiscal spending have threatened longer-run inflation expectations, with the current framework “elevating the risk that long-term expectations become unanchored.” The Central Bank of Brazil also noted that market participants should expect a rate hike “of the same magnitude” at the next policy meeting. 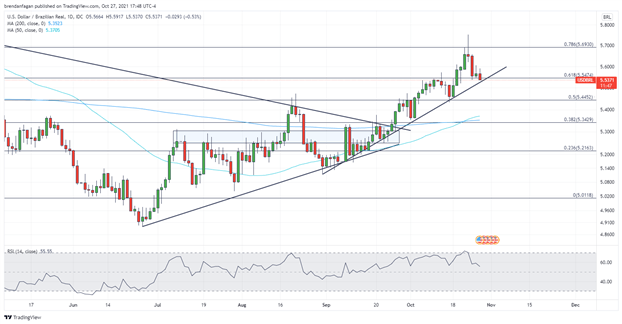 The Brazilian Real has been under pressure of late as the government announced its intention to ignore spending rules and increase payments to those who are struggling. Additional fiscal stimulus may continue to pile pressure on central bank policy makers, as policy continues to tighten at a robust pace to combat rampant inflation. Central bank officials had previously announced their intention for a 100 basis point (bps) hike at this month’s meeting, but were forced into more aggressive action as the fiscal framework in the country shifted.

The Central Bank of Brazil had not hiked rates by more than 100 basis points since 2002, with the most recent policy move signaling the BCB’s intention to deliver on its pledge of returning inflation to the bank’s target. Consumer price increases remain well above the bank’s year end target of 3.75%, and the monetary tightening phase may continue to pick up pace as the bank looks to restore confidence in the near and medium-term prospects of the Brazilian economy.