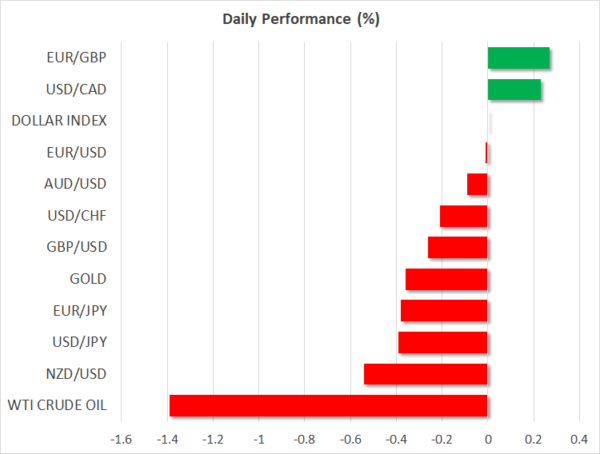 The main event today will be the Bank of Canada decision at 14:00 GMT, which will likely spark fireworks in the loonie as policymakers either validate market expectations for an aggressive rate hike cycle or tone them down. Money markets are pricing in almost four rate increases for next year because the Canadian economy is roaring.

Growth has come back online, inflation is sizzling hot, businesses are feeling optimistic, the housing market is on fire, and oil prices are going through the roof. Best of all, the labor market has already recovered all the jobs lost after the crisis, so wage growth could fire up soon to keep inflation dynamics rolling.

Hence, another reduction in weekly asset purchases today seems almost certain. The question is whether the central bank will also recalibrate its forward guidance to signal the hiking cycle could begin earlier. Admittedly, with the economy firing on all cylinders, the BoC may not have much of a choice, even though it doesn’t want to get too far ahead of the Fed. A hawkish message could reactivate the loonie’s uptrend.

Yen weakness emerged as the dominant FX theme yesterday but the currency has recouped all its losses already, capitalizing on the slow grind lower in global yields. The BoJ will wrap up its own meeting early on Thursday. Not much is expected. The economy has barely escaped deflation despite the inflationary shockwave in the rest of the world and the growth outlook is bleak.

Since the BoJ has essentially exhausted all its ammunition and without any expectations for normalization, the yen doesn’t react to policy decisions anymore. While the beatdown in the Japanese currency has taken a breather for now, the trend still seems negative with stock markets going into overdrive and the Bank of Japan not expected to join the global normalization party.

Elsewhere, Australian core inflation was a little hotter than expected in Q3, adding fuel to bets the Reserve Bank will raise rates next year already. Investors now seem to be playing a game of chicken with the RBA.

The central bank insists rates won’t rise until 2024 but money markets are pricing in three rate increases for next year alone. That seems way too aggressive, leaving ample scope for disappointment in the aussie, especially with China battling its own economic slowdown and iron ore prices in the gutter.

Earnings and politics in the spotlight

Sterling will also receive its fair share of attention today when UK Chancellor Sunak unveils his latest budget. Many investment and spending initiatives have already been announced, but the elusive question is whether the budget as a whole will be stimulatory or whether spending will be dialed back further.

In the stock market, the S&P 500 reached another record yesterday even though the index surrendered most of its gains late in the session. The earnings season will kick into full gear today with Coca Cola, Ford, McDonalds, and Boeing releasing their quarterly results.

Yet the most crucial element for this options-driven market could be whether the Democrats finally strike a deal on social spending. The party’s leadership suggests a compromise is imminent and if the plan doesn’t include higher corporate taxes after all, this could serve as jet fuel for equity markets.

But that doesn’t mean investors should throw caution into the wind. There are several risks markets are happy to ignore for now, from unresolved supply constraints to liquidity being withdrawn to the fact that inflation expectations just won’t stop rallying as traders search for inflation hedges.

How I Became A Full Time Forex Trader at 17 Years Old!