In early trading this morning, the USD/ZAR climbed to a short-term high within sight of the 14.90000 ratio, but since achieving this rebound the Forex pair has moved lower again.

As of this writing, the 14.77000 ratio is being tested and support and resistance levels are within clear sight. Traders may feel rather abused by the amount of volatility which has been demonstrated within the USD/ZAR the past handful of days after a low on the 20th of October tested values not seen since the middle of September, and then this morning highs challenged marks from two weeks ago. The short-term fluctuations within the USD/ZAR show that equilibrium is still being battled for as price velocity proves dangerous.

Speculators within the USD/ZAR are encouraged to use stop loss orders effectively. The prospect of catching a large move is tempting for traders, but they should also beware that the rather abrupt swings in direction may continue short term. However, from a risk reward viewpoint, traders cannot be blamed for starting to believe the USD/ZAR at its current levels may be overbought. Yes, when looking at a three-month chart of the Forex pair, the value of the USD/ZAR could be interpreted as stuck in the middle of its price range.

Resistance near the 14.81800 level is tantalizing and if traders have their eyes on downward potential, this value could be used as a nearby stop loss. Sellers of the USD/ZAR may not want to hold on positions too long and may be more inclined to pursue quick-hitting positions which aim for relatively close take-profit ratios.

Traders who want to be buyers of the USD/ZAR may want more momentum to develop and the 14.82000 juncture to be penetrated to initiate a short-term long position. Short term, the USD/ZAR may prove volatile as financial institutions try to gauge the next trend within the Forex pair.

Trading the South African rand the past few months has produced solid trends with volatile price action. In the short term, it appears an incremental bearish movement may still have some power to generate. 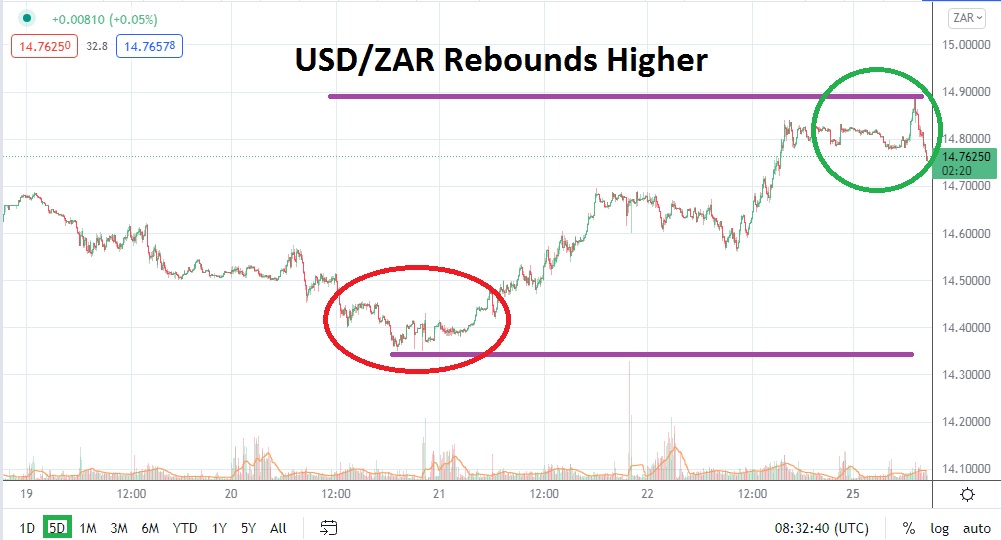