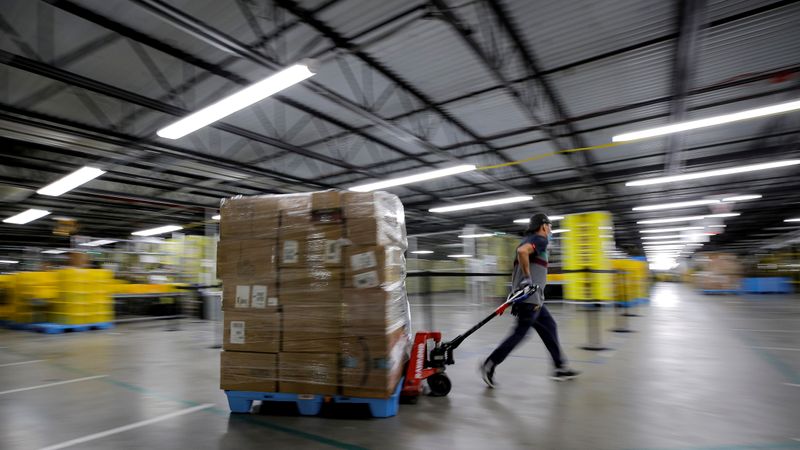 (Reuters) -Workers at an Amazon.com Inc (NASDAQ:) warehouse in New York City’s Staten Island borough have filed a petition to form a union, the U.S. National Labor Relations Board (NLRB) said on Monday.

The move represents the second time that U.S. staffers for the world’s biggest online retailer have aimed to unionize this year, following a failed effort https://www.reuters.com/article/us-amazon-com-union-idTRNIKBN2BW1HQ at an Alabama facility in April. Though Amazon has long resisted such efforts, some employees are advocating for more protections and benefits in light of a COVID-19 pandemic that put their safety at risk.

Chris Smalls, a former employee at the Staten Island warehouse, led the organizing drive and collected around 2,000 signatures to request an official vote through the NLRB. Smalls rose to prominence last year when Amazon fired him, alleging he violated a paid pandemic-related quarantine when he showed up at his facility to protest work conditions.

“This is monumental for the workers,” Smalls said in an interview. “This is proof that you can stand up, fight back and organize your workplace.”

The NLRB confirmed that the union petition was filed electronically with the board.

Amazon did not respond to requests for comment on the petition.

For the past six months, some staff at the Staten Island warehouse, called “JFK8,” and other nearby facilities have been organizing to form what they call the Amazon Labor Union (ALU). Smalls said he set up a tent outside the warehouse, while some current workers championed the same cause on the inside.

These workers are demanding higher wages, job security, safer conditions, better medical leave and more paid time off. According to Smalls, Amazon has put out anti-union literature, and his group has responded with their own literature.

The organizing drive is being held at Amazon’s only New York City fulfillment center, one of the company’s large warehouses from which it ships many goods.

It is not clear when an election would be held if regulators green light the petition.

Amazon handily beat back an effort by the Retail, Wholesale and Department Store Union (RWDSU) to organize its Bessemer, Alabama, warehouse.

Workers rejected joining the RWDSU by a more than two-to-one margin this spring, but another vote could be held as the NLRB reviews union claims that Amazon violated labor laws during that election.

Here's why you'll NEVER make money in Forex. The Forex Cycle of Doom…