Here is what you need to know on Wednesday, October 20:

Netflix (NFLX) has come and gone, and now it is on to Tesla (TSLA) reporting after the close this evening. We wanted to fade the rally into Netflix earnings, and we feel the same way about Tesla. Stay tuned. The picture has changed somewhat this morning as yields rise again, meaning stocks will find gains hard to come by. The recent rally in the stock market has not exactly been healthy anyway with falling breadth (stocks making new highs), and now we get to see if this market really has the stomach for a fight.

Currency markets are a bit discombobulated by the resignation of noted ECB hawk (higher rates) Jens Weidman. As one man steps away, another returns with Jack Ma of Alibaba (BABA) now seen in Europe following on from his Hong Kong sightings earlier this month. BABA shares have jumped again on that news, as well as the company making its own chips and UBS upgrading Chinese stocks.

US futures are flat.

Novavax (NVAX) drops over 20% as a report in Politico says it is having trouble meeting FDA standards.

Facebook (FB) plans to change its name, according to The Verge.

Netflix (NFLX) beats on EPS, revenue in line, shares lower now having spiked on the numbers.

Biogen (BIIB) up 2% on EPS and revenue beat.

Alphabet (GOOGL):  “A Swiss court has dismissed Google’s bid to block the award of a government cloud computing contract worth up to 110 million Swiss francs to rival bidders.”-Reuters.

Canadian National Railway (CNI) CEO to resign at the end of January after failed bid for KSU.

WD-40 (WDFC) slides (too easy) after it misses on revenue. 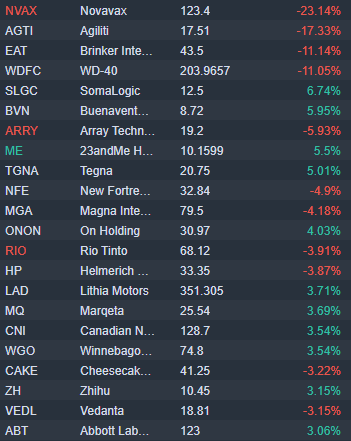 Global Inflationary pressures are closer to UAE consumers than it appears