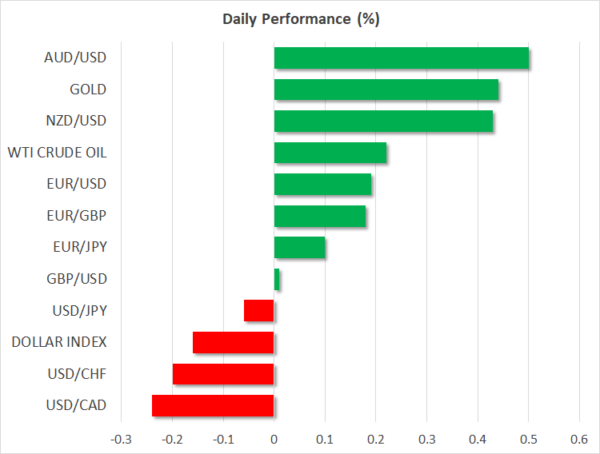 Embattled property giant, Evergrande, has reportedly paid its overdue interest on dollar-denominated bonds amounting to $83.5 million following weeks of speculation about its finances. Markers were taken by surprise from the news as only a day ago it looked like the company was going to miss its coupon payment after the sale of some of its assets fell through.

However, whilst there is huge relief that Evergrande has dodged an imminent default, investors remain wary about the company’s future prospects as further interest payments on international bonds are due in November and December. Moreover, a number of other Chinese real estate developers, most notably Sinic Holdings, have already defaulted on some of their bond payments, hence, the subdued reaction in the markets today.

China’s blue-chip CSI 300 index closed up 0.6%, but the SSE Composite index slipped by 0.3%. There were no fireworks in Hong Kong either as the Hang Seng index was last trading 0.3% higher as Evergrande’s earlier rally sputtered out in late session.

While the focus in Asia remains on Evergrande and its next payment deadlines, the Q3 earnings season is keeping investors preoccupied on Wall Street. The S&P 500 closed at a new all-time high on Thursday, boosted by more upbeat earnings, with Tesla being one of the big gainers after the company reported stronger-than-expected results.

However, futures were struggling on Friday after Snapchat owner, Snap Inc., missed its revenue estimates, blaming Apple’s recent privacy policy changes for the hit to its digital advertising business.

Shares in Snap and other tech firms that rely on digital ads, such as Facebook, Alphabet and Twitter, plunged in after-hours trading yesterday and the Nasdaq Composite was last indicated to open 0.4% lower today.

However, Dow Jones futures fared slightly better, likely being buoyed by reports that the Democrats are inching closer to reaching a compromise between the party moderates and progressives on the size and scope of President Biden’s ambitious spending agenda. After months of wrangling, the proposed $3.5 trillion social spending bill looks set to be significantly watered down in order to get Senate approval whether the Democrats have a slim majority.

But hopes are high that both the hard and human infrastructure bills will be passed by Congress by the self-imposed deadline of October 31 and this could give the Dow Jones the edge in the coming days. However, even if the Nasdaq were to pare its weekly gains today, it will have plenty of chance to fight back next week as a slew of big tech earnings are on the way.

Dollar on the backfoot, hoping for a Powell boost

In the FX sphere, safe haven currencies were slightly under pressure from the improved risk tone, though the US dollar was able to draw support from firm Treasury yields. Ten-year Treasury yields briefly topped 1.70% on Thursday after US weekly jobless claims fell to a new post-pandemic low and existing home sales rose more than expected, reinforcing the view that the Fed will begin tapering its asset purchases next month.

Fed Chair Jerome Powell is due to participate in a panel discussion later today and yields could climb to fresh highs if he strikes a hawkish tone.

At the moment, though, the dollar is headed for weekly losses, with the commodity-linked currencies being the main winners. Expectations that surging inflation will compel central banks to tighten policy more aggressively than what has been messaged by policymakers has spurred the aussie, kiwi and loonie to multi-month highs versus the greenback.

An intervention by the Reserve Bank of Australia to cap the yield on three-year Australian government bonds – the first in eight months – doesn’t appear to have dented the aussie, which is rebounding strongly after yesterday’s dip.

Meanwhile, some encouraging flash PMI numbers out of the UK and Eurozone are propping up the pound and euro. A huge beat in the UK October PMIs is more than offsetting the surprise decline in September retail sales. The Eurozone PMIs were not quite as strong but still solid overall. However, growing bets that the European Central Bank could also be forced to bring forward its first rate hike are likely behind some of the euro’s gains. 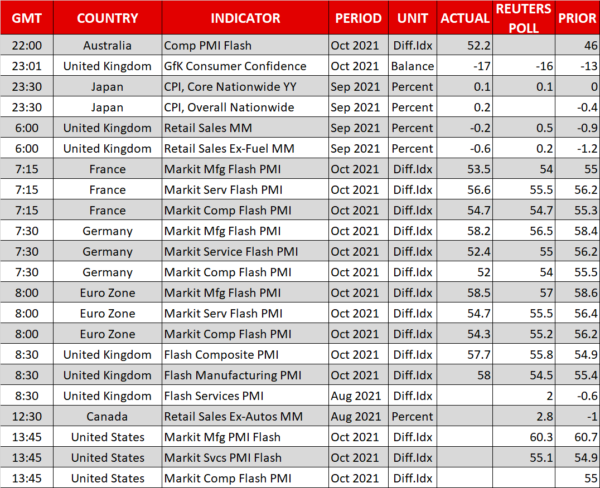 Late to The Party: Will Dogecoin (DOGE) Rise and Shine Soon? – FX Leaders

The Analytical Overview Of The Main Currency Pairs – Action Forex