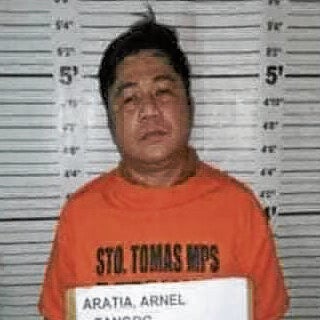 DAVAO CITY — Police in Sto. Tomas town of Davao del Norte province arrested on Thursday a suspect behind an entity which the Securities and Exchange Commission (SEC) had flagged for soliciting investments from the public at amounts ranging from P5,000 to P1 million, with a promised quarterly return of up to 30 percent, even without the necessary license.

Based on the report of Police Lt. Col. Frederick Deles, Sto. Tomas police chief, Arnel Aratia, 47, was arrested through a warrant issued by Judge Vernard Quijano of the Regional Trial Court Branch 153 in Biñan City, Laguna province, for syndicated estafa and violation of the Securities Regulation Code.

Aratia is now detained at the Sto. Tomas police station. Deles said they were still arranging to bring Ariata to Laguna for presentation before the Biñan City court. Aratia was identified as the president of the group called Achievers and Golden Marketing and Consulting (AGMC), which has an office in a radio station he owns located at RPJ Village, Barangay Tibal-og, Sto. Tomas.

It was not known how much AGMC has amassed from investors but one businessperson was reportedly unable to recover P23 million invested in the company.

Deles told the Inquirer that the Laguna police informed him about the possibility of Aratia’s presence in the town.

According to Deles, it took a month of surveillance before Aratia was tracked as he does not live in the town, only going there to oversee the radio station’s operation.

Deles said that, so far, they had not received formal complaints from local investors about AGMC’s investment solicitation activities. But Col. Antonio Alberio Jr., Davao del Norte police director, called on the public to come forward now so they can seek justice for their investment losses.

The SEC-Davao Extension Office welcomed the arrest of Aratia as it hoped that similar entities would be stopped from preying on unsuspecting investors who are looking for instruments to invest in, making them vulnerable to offers of high returns.

In September 2020, the agency released an advisory warning the public to stop investing in AGMC and Achievers Golden Holdings Inc. as these did not have legal personality to solicit investments.

At that time, AGMC also had an office in the Valencia Corporate Center here.

Based on the advisory, AGMC was luring investors to its “cashback program” that accepts investments ranging from P5,000 to P1 million with a promise of profit of between 1 percent and 30 percent, depending on the amount and the investment period, which was up to three months.

Several investors told reporters here late last year that Aratia had presented himself as someone influential and being consulted by politicians. AGMC also invited would-be investors in financial investing seminars like on the basics of forex trading, holding it in classy hotels here.

A local entrepreneur who became an AGMC investor-turned-solicitor revealed on condition of anonymity that she was able to recruit a local businesswoman and had her invest P23 million.

She said the businesswoman was issued checks which later turned out to be unfunded.

Don’t miss out on the latest news and information.

A Brief Guide On Exness Bonus To Help You All – Pragativadi